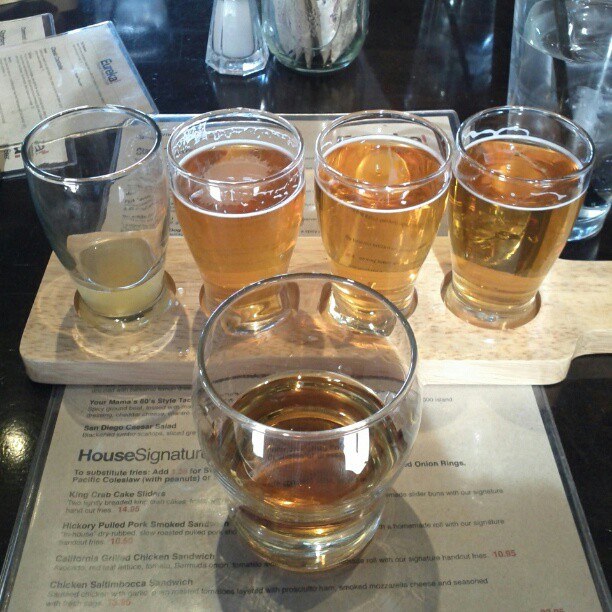 Pliny the Younger. Some call it the best beer they have ever had. Some call it “liquid gold”. I’ve even heard it called “The Nectar of the Gods”. To me, it’s a very well-made beer that’s been hyped up so much that people treat it like it’s a fresh pair of Js on a Saturday morning (Hi, my name is Andrew and I’m a hypocrite). I won’t deny that it is markedly better than Pliny the Elder, but it is not wake-up-at-4AM-in-the-morning better. But let’s make it clear, it’s a damn good beer.

I’m not here to review Pliny the Younger. Go read Jason’s write-up for that here. I’m here to tell you about how one bar nearly ruined a Pliny the Younger tasting. As in, it made it taste bad. How? By not treating it with the respect it deserved (because good beer deserves your respect, and that’s the way it is).

Eureka! Burger. Claremont, CA. My go-to for Pliny the Younger because if there’s one thing they do right, it’s that they don’t buy into the hype. The beer sells itself, no need to make people wait in line for it. Hats off to them for that. However, when my buddies and I showed up after work to redeem our tickets, the way they presented the beer was not good. Not good at all.

Issue #1: they only poured a taster per person. This was the least offensive of their indiscretions but it certainly makes it difficult to really have a full Pliny the Younger experience. Not a huge deal though. In fact, the benefit of pouring it as a taster amongst a flight is the ability to do a side-by-side comparison between the Younger and the Elder.

Issue #2: The taster glass has no space at the top. You can’t get your nose in when you drink it.

*** WARNING! BEER SNOB ALERT! ***
Everything you read beyond this point is going to be very pretentious. You’ve been warned.

The beer needs space to breathe. 75% of your sense of taste is controlled by your sense of smell. A HUGE aspect of what makes Pliny the Younger so good is its aromatics. It smells beautiful!

Fortunately for the group, we were smart enough to ask for larger glasses for our tastings. So we avoided THAT issue. That leads us to…

Issue #3: Those new glasses they provided. They smelled bad. Like… stagnant, rotten hard water. That didn’t help with the “smell” portion of the tasting. We should have maybe smelled the glasses before we dumped the beer but… could we predict that?

Issue #4: The beer was fucking tepid! I mean come on! Your bar gets one keg a year of this stuff. People line up for hours to try it. And you serve it at ROOM TEMPERATURE! I get it. You want to save time. So you pour a bunch of tasters in advance so it gets to people faster. THAT’S STUPID! Because then you have people drinking lukewarm beer and I don’t care how good a beer is, even beer that’s supposed to be served at a “warmer” temperature (IPA suggested temperature: 54-57F), it should still be chilled to some level.

All that combined? That sucks. You know why? Because unlike me, one of my friends had never had Pliny the Younger before. And you know what he said: “I don’t get it. The Elder tastes much better”. And you know what. I AGREED. Because they presented it in such a poor fashion.

Goddammit Eureka! Burger. How could you ruin this man’s first experience with such a well crafted beer?

But before you grab your pitchforks and torches, the night was saved. We had one extra ticket for a taster that was supposed to go to someone else. They didn’t make it. So we got one more pour of Pliny the Younger. This time it was chilled. This time we rinsed out one of the larger glasses so it didn’t smell terrible. And this time, when we tasted it, it was excellent. Again, not the best beer I’ve ever had, but certainly an amazing beer. My buddy, he agreed. And to me, that was all that mattered.

Why do I care? Because I like good beer. And I like for people to enjoy good beer. If you’re going to spend your time and money on the wonderful world of beer, you might as well do it right. So please remember the following three things:

Put it in a glass (in my best Sir Mix-a-Lot voice)
There are some beers that are okay to drink from the bottle. But if you’re enjoying a craft brew or a nice Belgium, do the right thing and drop your beer in a glass. Trust me, it tastes better.

Serve it at the right temperature
Different types of beer have different standards. Don’t assume that ice cold is the way to go. However, chilled is always preferable to warm. I wish I could say I was as exacting as this, http://www.ratebeer.com/Story.asp?StoryID=479, but I really just try to make sure it’s not lukewarm.

Serve it in proper glassware
My M.O. is I tend to avoid pint glasses. My standard is to use a tulip glass at home. If you really want to get picky here’s a nice listing at Beer Advocate: http://www.beeradvocate.com/beer/101/glassware/.

And that’s really what this post is all about. Well, that and I was feeling pissy about warm Pliny.

One final word on beer: If all else fails, drink it how you like it.

I find this works for most alcoholic beverages.