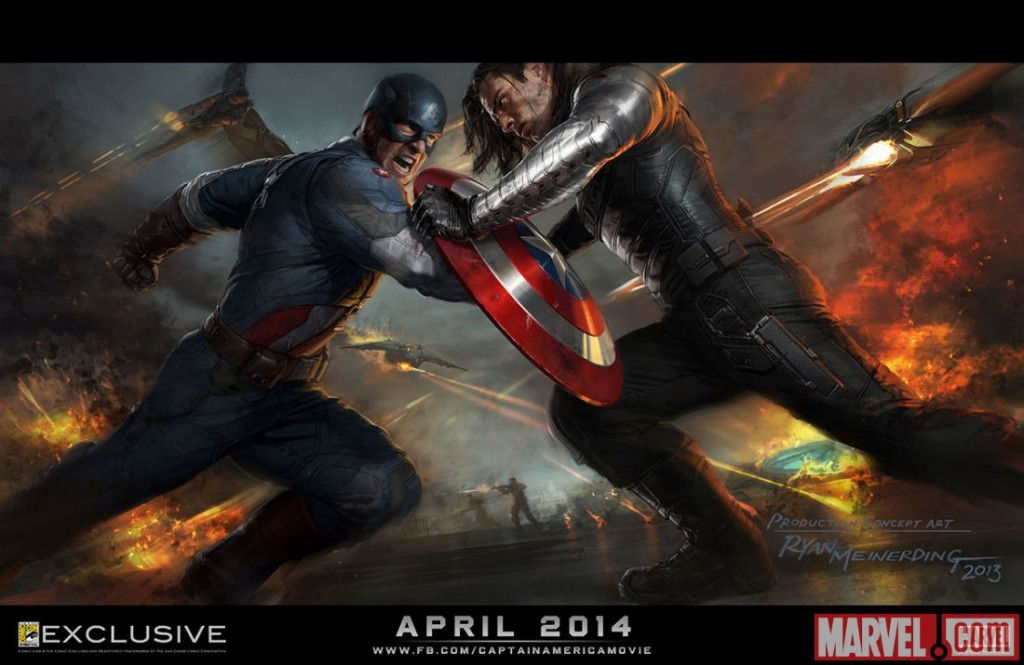 Simon thought the movie was incredibly balanced and delivered:
I had some high hopes going into the movie and the movie delivered and then some. I’d say this is now my 2nd favorite comic book universe movie after The Dark Knight. The movie was well paced from start to finish. I loved how it dabbled in different genres like mystery/thriller, political, moral questions, and of course action without losing focus or getting lost. I was not left wanting throughout the movie. I feel Captain America has been wonderfully developed as a character, and what made me really excited was to see how much territory they introduced to further develop his character, and everyone who was in the movie really. I can’t wait to see him in a movie again, if nothing other than the satisfying reverberations when something hits his shield and hits it hard. As far as a blockbuster goes, this movie stands a notch above the rest.

Andrew rightly praises Scarlet Johansson:
Awesome. Is it just me or is Scarlet Johansson more attractive as Black Widow? I’m normally not a huge fan but when you give her that red hair and teach her how to kick ass, oh man…

The movie was a lot of fun. I enjoyed it more than Avengers, which I loved. I’d say it’s my favorite Marvel movie since Spider-Man 2. I love the juxtaposition of old-fashioned Captain America with the modern day. It provided both funny and emotional moments. I’ve read some complaints about the fight scenes being poorly shot but I really got into them. It’s been a while since we’ve seen basic hand-to-hand combat in a comic book movie and that was refreshing. The storyline was interesting enough to keep me engaged but did not take away from it being a fun comic book movie.

Collins provides a great perspective as someone who somehow didn’t see the first Captain America and is watching this one without that context:
Coming into this movie having not seen Captain America: The First Avenger. I have to say that this ranks as one of the best recent Marvel Movies to date. I didn’t feel like I needed to watch the first movie to get into this movie. Much of the backstory is explained and the overall story flowed well. Compared to the Avengers, Thor, and Even Iron Man, the overall plot of Captain America: The Winter Soldier comes across much smaller and down to earth. No God like characters and the world isn’t about to be eradicated.

The action in this movie is incredible with one of the best car chases I’ve seen since The Dark Knight. The antagonists in this movie are actually threatening. Much of that they seek to do they succeed, in almost every point they are ahead of our heroes. A level of suspense I haven’t felt in a movie in a long time.

Overall they didn’t try to go over the top with this movie and I think it really benefited from it. Lastly I want to mention that this movie really gives that Stereotypical Goodie Two-Shoes character (Captain America) a good showing. Typically characters like that tend to be bland, boring, seen it done that. But after this movie, I’d follow Captain America. Cap’s Orders.

Mo had much to say and is super excited about the direction the Marvel Cinematic Universe is heading:
The newest entry in the Marvel Cinematic Universe (MCU), Captain America 2: The Winter Soldier, is everything a comic fan could want in a standalone superhero movie. The beginning of the movie throws you right back into Steve Rogers world as a S.H.I.E.L.D.’s super human soldier in the aftermath of the events from The Avengers. The beginning has a very generic flow that isn’t questioned because Steve Rogers is in a place, professionally and mentally, that you can easily imagine him in after waking up from 70 years of being frozen and being called into action. The film takes no time introducing new characters (Sam Wilson AKA The Falcon and Agent 13, Alexander Pierce) while making sure to bring back old familiar faces (Black Widow, Nick Fury, The Winter Soldier) to establish continuity and a smooth transition to contemporary times. Captain 2 also beautifully balances character development, drama and action while making sure to expand the MCU with new characters, an underlying villain across the Marvel Universe and sprinkling in hints of the futures of current characters. Captain’s fight scenes are so wonderfully done, both the extensive hand to hand combat mixed with the (previously underutilized) shield throwing and smashes. They find a variety of unique uses for the shield from throwing, sliding, shielding, and smashing, which makes Captain America feel he has really come into his own and embraced his role as a trained soldier. The continual character growth, mixed with seamless special effects, a wonderful villain, The Winter Soldier, to match Captain’s abilities and an interesting and thought provoking original story, that still managed to expand and impact the MCU in a way no other solo super hero movie has done, makes Captain America 2: The Winter Soldier a must see movie to kick off the Summer.

Jason provides some spoilers and a pair of GIFs for your enjoyment:
Captain America 2: The Winter Soldier, was a damn good super hero movie. The story has opened avenues for the Avenger’s universe. Captain America opens the viewer to see the world not as a place where all good (in the most twisted way) intentions are not for the best of mankind. This movie also proves that Marvel can make a movie without Tom Hiddleston as the villain. It also has led to one of my favorite GIFs from Tumblr. Thank you Huffington Post.

Winter Soldier, brings us back into the fold of Captain America and how much of an upright person and soldier he is. This movie also demonstrates a world where half truths and manipulation are at its core. This is a detour for Captain America because there is not a villain that is outwardly threatening the America or the Earth. Instead he is battling forces of government corruption and an undercurrent of global manipulation that threaten the freedoms of everyone in the world utilizing the statement “For the Greater Good.” Captain America does not waver in his morals to protect the little guy from the bullies of his world who are hell bent thrusting their control over the world. As super hero movies are concerned this is up in my favorites.