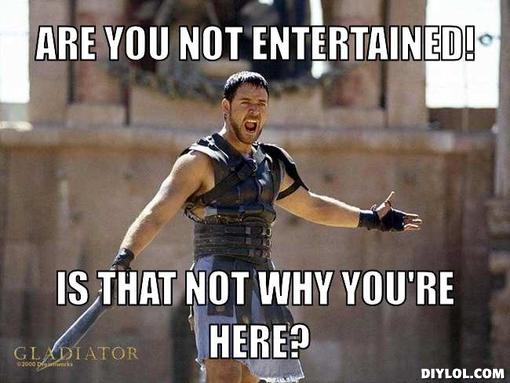 Keep in mind that I’m the same person that wrote a whole post on “respecting your beer” so this may come off as a tad hypocritical. But it’s my post, so deal.

One of my favorite movies of all time is Hudson Hawk. No, seriously. The 1991 Razzie Worst Film of the Year (Check out more accolades here), I can’t get enough of it. For me, it’s an entertainment treasure trove. I mean, look at these little nuggets of comedy it gives you:

Here are some statements that I’ve made that have led to arguments:

“The Beverly Hills Cop trilogy is way better than The Dark Knight trilogy.”

“Harry Potter is just as epic as Lord of the Rings.”

“I may not watch it again, but I didn’t dislike The Last Airbender.”

Okay, so maybe I was being a troll (FINE. Probably). Harry Potter wasn’t that epic. Beverly Hills Cop III was definitely a poor showing. And M. Night Shama-lama-ding-dong should probably be chased by a bunch of villagers with pitchforks and torches. But my point is this: I watch movies to be entertained, not to appreciate the art of film making.

A perfect example is District 9. I wanted to walk out. There was no character I was attached to. The filming was awesome, but I found the story dull. Why should I be moved by alien apartheid? I’d much rather watch a film about the real life issues that are faced in South Africa. I just wasn’t compelled. But apparently it was a great movie. I have met very few people who didn’t like it.

Another example: The Hurt Locker. Great movie. I enjoyed it. But given the option to watch that or pretty much anything else and I would probably pick the anything else.

This might sound silly, but I don’t mind watching bad movies. Oh man was Daniel Day-Lewis awesome in Lincoln but seriously, give me The Boondock Saints on Blu-Ray and let’s call it a night. I have the news, magazines, and books to be thoughtful (although I do love me some young adult fiction… wait… forget I said that). When I go to the movies, it’s an opportunity to escape reality. Plus, I’m spending money to watch something on a giant screen, with giant sound. So when I go to the theaters, I tend to want to watch something that is visually stimulating with a lot of action. So anything Marvel, Pixar, DC… you can bet I’m spending $15 to see it in theaters. At home I like to watch things that are more lighthearted or slapstick. Something I don’t mind pausing so that I can take a call or maybe leave for the next day. Movies are a momentary reprieve from life. I shouldn’t have to work to enjoy them dammit. I shouldn’t have to reflect; blow some shit up, make me laugh and call it a day. I have depth 99% of my life (figures are not drawn to scale), the 1% of time I spend in the movies had better be filled with stupid puns, pretty girls, over-the-top villains, and explosions. If by happy accident those things run into a decent script, quality cinematography, and great acting (LOTR, The Dark Knight, Inglourious Bastards, Star Wars), then I’m watching it twice. But in general, I don’t expect movies to be compelling. I expect them to be entertaining. And I am entertained by the silliest, simplest things.

The point of this post: come slum it with me some time. With lowered expectations, the crappiness of the movies BECOMES the entertainment. Can Kristin Stewart complete a sentence without an awkward breath? Does Michael Bay do anything but explode stuff and shoot Megan Fox’s midriff? My God, there is a lot of orange in that apartment ($5 if you can guess the reference).

Oh wait, I remember. The last time I saw anything with Will Farrell as the main character. He really grinds my gears.

What I mean to say is: I really know nothing about movies except that I enjoy practically all of them. Especially the bad ones.