In the ’90s, Americans had a chance to produce a film featuring their own take on Godzilla, and the subsequent 1998 film was as well received as New Coke. Over 15 years of denial later, we now get to witness their second chance, also called Godzilla. But this time, the King of the Monsters would walk in glory – or at least he would, if the film itself truly did justice to Godzilla. Director Gareth Edwards has meticulously crafted a film with a grand sense of scale but without a worthy emotional foundation.

(warning: spoilers after the break)

Don’t get me wrong; I definitely prefer this film to the ’98 flick (which the Japanese rightly distanced themselves from), and I dug what it got right. Its grim tone complements its sequences of absolute destruction, Alexandre Desplat’s score rises to the occasion, and the sound design and visual effects are top-notch. What turned me off were three things: the surprising lack of Godzilla, a weak human story, and the failure to develop a compelling idea regarding Godzilla’s purpose.

The film’s star, frustratingly shown only in glimpses.

At one point, Admiral Stenz (David Strathairn) asks Dr. Serizawa (Ken Watanabe) whether Godzilla stands a chance against the MUTOs (Massive Unidentified Terrestrial Organisms), to which Serizawa utters, “The arrogance of man is thinking nature is in our control, and not the other way around. Let them fight.” It’s a damn fine line to introduce the inevitable rumble, but when the film ended, I thought it typified the film’s hypocrisy: for a film called Godzilla, Godzilla is in it for less than 15 minutes of a 123-minute-long runtime. Why is the film trying to control Godzilla? He’s supposed to be its heart, its soul, and its star, damn it. He’s terrific whenever he’s onscreen here, but he’s relegated to mere glimpses and short sequences that it’s downright frustrating.

I get that Edwards is hearkening back to Jaws and Alien, specifically the way they didn’t reveal their titular creatures until much later into their second acts. While I do think he orchestrates Godzilla’s first full appearance quite well, one thing to keep in mind is that everything else in between all these glimpses of Godzilla needs to be compelling. That’s what makes Jaws and Alien so involving – we see how the creatures emotionally and personally affect the human characters even when the creatures themselves are not onscreen. Think of Brody’s struggles with the mayor in Jaws and how the Nostromo crew struggle to cooperate in Alien. I don’t see any of that in Godzilla, which leads me to my next point. 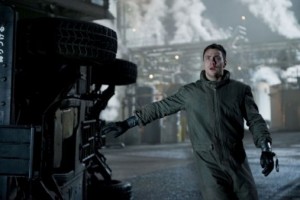 Staring in shock is what these characters do.

The story chose a weak human story to pair with Godzilla. The film’s main characters should have an emotional, personal connection to Godzilla, but they don’t. No one from the Brody family (Aaron Taylor-Johnson, Bryan Cranston, Elizabeth Olsen) even has an idea who Godzilla is until the second act. If anything, they’re connected to the MUTOs, who have more screen time than Godzilla. The only two characters who know Godzilla are Serizawa and Graham (Sally Hawkins), and they’re consigned to the sidelines.

The human characters become even more problematic when taking into account the film’s human-centric narrative. I don’t mind if humans are showcased more than Godzilla; I do mind if the humans are dull, flat characters. The humans should provide the film’s emotional foundation, but it’s incredibly weak here since the Brody family’s role in relation to Godzilla is nonexistent, rendering them pointless. Even during the monster brawls (which are unfortunately very short), the film keeps cutting to what Ford Brody (Johnson) is doing, which is military-related. Did I mention the military here is absolutely banal? 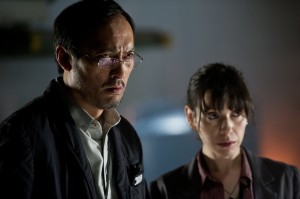 The main characters we deserve and need.

It is Serizawa himself who believes that nature has an order, and whenever things go out of order, Godzilla’s purpose is to restore order. This is such a compelling idea, and the film goes absolutely nowhere with it. Serizawa mentions it a few times, but this idea never evolves into a meaningful discussion, much less become realized by Godzilla itself. The human story should have been developed around Serizawa and Graham; doing so would provide an emotional anchor and develop this underserved theme of Godzilla’s purpose.

I really wish I could like this film, but it makes a bunch of fundamental errors (or decisions, if that’s how you look at them) that I simply couldn’t get behind. As someone who was awaiting the triumphant return of Godzilla, I found this Godzilla disappointing.

On a side note, I’d love a Godzilla – Pacific Rim crossover. Who’s with me?