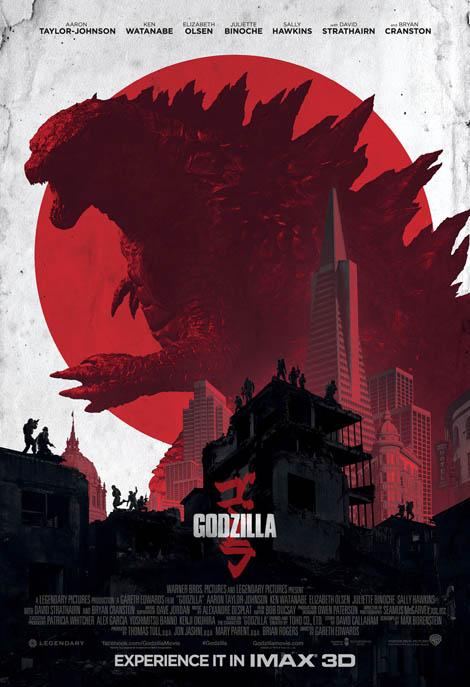 All of us were looking forward to this movie, and opinions were all over the place for this film. We can’t seem to agree if it was good, average, or terrible. Surprisingly Jun (our more ‘Film’ minded viewer) and Andrew (our entertainment value minded viewer) both agreed in their take on the film. A weird world we live in indeed.

Godzilla returns to the big screen in an enlarged fashion. I am not just talking about the pounds that apparently he has gained, but as a summer blockbuster release. I, among the group, was the most excited to see this movie and I feel it did not disappoint (somewhat biased opinion). The movie made references to the original 1954 film and borderlines the idea that, humans, no matter how advance we think we have come, are still powerless against forces of nature that can easily destroy us. The idea of nature being ultimately uncontrollable is stitched in the fabric of this movie. Even man’s greatest most destructive powers can not give us the power control nature, whether it be in the form of an Earthquake, Tsunami, Tornadoes, or in this case giant monsters.

If you want to be entertained and didn’t really care for the running theme of the movie, then watch it for the giant monsters that treat humans like ants. Enjoy it because of the devastation that is caused by these creatures. Geek out about a giant Lizard that can breathe fire and is wrecking a city just to hunt its prey, because who doesn’t want to see a major American city just get thrashed by the collateral damage cause by giant fucking monsters trying to kill each other.

Collins understands some of the hate, but enjoyed the experience of watching Godzilla.

This movie is getting a lot of mixed reviews and it’s really easy to say why. You don’t get to see a lot of Godzilla. But what screen time he does get is roaringly awesome. Bryan Cranston delivers an excellent performance. You can clearly see his character arch and the emotions of the turmoil he goes through. But everyone else in the movie is flat and boring. Emotionless faces running to the next plot point.

You’re going to enjoy the few minutes of Godzilla foreplay and the payoff is alright. Alright, not amazing… alright. The Characters they stick you with, other than Bryan Cranston’s, are nothing to scream about either. But I cheered every time that bad lizard was on screen.

So go enjoy have fun, and take light on all the plot holes you see just to get Godzilla to fight in a big city.
Rating: 3.0/5.0

Simon felt that the movie fell short of great but made for a good if forgettable disaster film.

Godzilla was 95% of the way to a good movie, and 55% of the way to a great one. It’s close enough where I found it good, but far from great – which feels like a missed opportunity. For something like Godzilla there should really be able to make a new great and classic movie and we haven’t gotten it yet. Still, this was far from disappointing for me, and I enjoyed it. Word of advice: go in expecting a disaster movie, not an action monster film. This isn’t Pacific Rim with more story, it’s more like a disease end-of-the-world movie, only with giant monsters instead of germs.
rating: 3.5/5.0

I really wanted to like this movie but all of my excitement was unwarranted. The movie is called Godzilla, but you only really see him on-screen in whole or in part for just over 5 minutes. I understand that they were going for a more human element to the story, but it wasn’t compelling enough. There wasn’t enough of a reaction to the disaster by people not in lead roles, and the plight of the common person (where a viewer would insert themselves in these types of movies) was not tangible. I was also disappointed that Bryan Cranston’s role seemed like a large step back in caliber from his stellar performance in Breaking Bad. He was reduced to a whining man, haunted by his past, who died all too soon before we could even see much of his anguish and connect with him on a personal level. If you are going to watch this movie, don’t expect drawn out epic monster battles (there are two, one of which was satisfying).

Andrew hated Godzilla, well not Godzilla himself but the movie.

I fell asleep FIVE times during the movie. If that’s not damning evidence for boring and poorly executed, I don’t know what is. Godzilla the monster, looked awesome, sounded awesome… was AWESOME. For the 100 seconds he was on the screen. But you know, let’s make Godzilla about the people, because we’ve got interesting characters. Oh wait, Ken Watanabe, is also only on screen for about 10 minutes. Well at least we have Bryan Cranston. Dead in 20 minutes, got it (not to mention he plays my least favorite Walter White in this movie, the whiny and entitled ninny). Well it’s not like we’re going to be watching a boring movie about some random soldier trying to get back to his family because, you know, that’s relevant to Godzilla.

Jun seems to agree with Andrew, which is all sorts of disconcerting. Art and Pulp meet here to hate on Godzilla (2014).

I think that tonally and visually, this is the Godzilla film that most of us wanted to see. The thing is, when Godzilla itself isn’t onscreen (which is about 90% of the film), nothing else is really captivating. The main human characters paired with the King of the Monsters are dull and weakly developed, and this idea of Godzilla being a force of nature bringing balance goes nowhere. The latter is a real shame since I think that would have been the film’s most compelling feature. Overall, Godzilla tiptoes around slowly instead of making a grand entrance.
Rating: 2.5/5.0

You can read Jun’s full review of the film here (warning Film spoilers in the article).