Jason: Thanks for the introduction. The only other warning that I would give is that there will be spoilers for those who have not watched the any of the movies.

My fifth ranked movie is the trash that was the Michael Bay, produced, Jonathan Liebesman, directed, money grabbing, racist, what the fuck piece of shit movie entitled, Teenage Mutant Ninja Turtles. Here are the reasons. 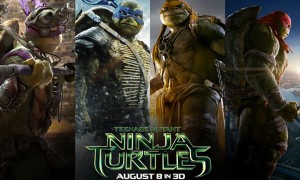 I will actually start with some things that I liked: visually it was really cool to see the turtles in a live action/CGI film, Megan Fox on a trampoline was great, and the turtle beatboxing was pretty cool. Still does not hold a candle to Ninja Rap. Seriously, these were the highlights of this movie; boobs, and beatboxing.

This movie made it clear that the neither of the creators actually seemed to give two shits about the story. This was shown clearly by the lack of care put into the characters’ origins – I mean seriously a fucking Art of Ninjutsu book thrown into the sewers? If that wasn’t bad enough, the turtles’ personalities are so over exaggerated that it was difficult to watch them interact with each other and with the other characters in the movie. The movie; as in all films that come labeled with Michael Bay’s name; has big explosions, somewhat interesting action sequences, product placement, and the dialogue and acting that will make prepubescent boys pop wood. The racism is the best part and comes in when we are introduced to Splinter, a Rat from New York, that I think becomes an Asian rat after he reads the Art of Ninjutsu book. WWII Propoganda anyone? I think this is how you become an Asian stereotype. All I could really think to myself during this movie was, “Wow, that would be kind of a cool toy… Kind of” (Just to make my point). This reinforces my belief that these people are trying to rape my childhood.

Andrew: I really don’t know how to respond to this. So much rage, so much anger. I hope you realize that Master Splinter is pretty fucking badass after being transformed into an Asian stereotype. I say if that’s what people want to think happens when you turn Asian, let’s run with it. I see now you’re just sad you didn’t have a Master Splinter to help you control your anger as a teenager and now you’re just lashing out. So sad Jason, so sad…

I’m going to go a different direction from you and declare Teenage Mutant Ninja Turtles III, my least favorite installment. I mean, Michael Bay’s film was a steaming pile of crap – I’d argue that even the T&A was poorly done (How do you fuck up Megan Fox T&A? HOW!?). But I really did enjoy the action scenes of the third movie and there was a certain sense of, “welcome back, turtles” nostalgia that allowed me to look about two inches past all that other bullshit. But TMNT III… 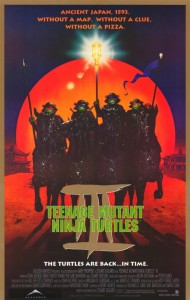 Look, it’s not that I didn’t like the idea. Actually, the idea is kind of stupid. But after how well the first two movies were made the animatronics, choreagraphy, and script were all kind of flat. The lantern time machine looked like it was made in a high school science project/Home Ec. class. It felt like the puppeteers were mailing it in. Lacking the same inspiration that the first two films had, you could tell they were attempting to capitalize on the novelty of putting the turtles in a foreign country. However, unlike the superior Karate Kid II, there wasn’t enough substance in the story to keep me engaged.

Look, I get it. Shredder was out of the picture and there was still money to be made. But if you’re going to give us a boring story, at least keep everything else up to standard. Unfortunately, even the action and dialogue were uninspiring to me. I just couldn’t get into it, even as a kid. Re-watching the movie as an adult didn’t help it at all. I can’t event think of a scene or moment worth linking to that makes me feel good about the damn movie. So you know what, I’ll take the turtle beatboxing instead.

Whew… that was a lot of bullshit to sift through. If you’re still with us click the link below to check out other parts of the TMNT Rankings!