Andrew: Having said all that, I’m not willing to declare that the next one on the list is much better. My number four movie is the steaming pile of crap that, while directed by Jonathan Liebesman, is really just another one of Michael Bay’s entries into the “make it violent, make it big, make it terrible” world of cinematic bullshit. What I mean is, Teenage Mutant Ninja Turtles (2014) is next on my list.

Now if I think it’s such crap, why am I not pissed off with a gigantic stick up my ass like you? Well… because this movie is supposed to be terrible. It’s Michael Bay. I tend to zone out during dialogue, plot development, and pretty much anything but action and females in most of his films. There are some exceptions but I find that if you follow that formula, you can survive a Michael Bay film without lighting yourself on fire.

You’ve told us why it’s crap. I have nothing to add. Well, one thing. How the FUCK do you make Will Arnett not funny? I mean come on! This is Gob Bluth we’re talking about here. Okay, okay… that’s it, I swear.

So if it’s so terrible, why did I enjoy it? Two things: nostalgia and action. It’s been so long since I’ve seen these heroes in a half shell that I was just tickled to see them kicking ass on screen. I thought their new look took an interesting direction. Each of them had a distinct style about 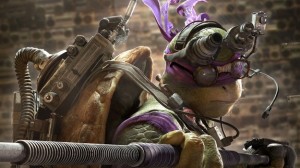 them (hat-tip to my boy Donatello rocking the nerd glasses!) and I think in this film more than the previous, they made use of their shells in an effective manner during the fights (And Donnie has an upgraded bo!). They beatbox and it’s awesome.  Also, it was cool to see Splinter take the Shredder head-on for an extended fight. And, like the turtles’ shells, the use of his tail made for an interesting addition to his hand-to-tail combat skills that I appreciated. The fighting was much cleaner and more creative than I expected so while I think it was an overall terrible movie, it did enough to crawl its way out of my personal TMNT cellar in this exercise.

And I do have one more closing complaint: you mentioned the turtles’ personalities were too exaggerated. I disagree. Michelangelo’s personality was borderline sexual predator and that dragged the group down with him. Seriously kids, girls don’t like it when you’re obsessive (Unless you’re good looking. I kid, I kid). Joking aside, I sincerely hope that impressionable youth understand that the type of nonsense Michelangelo is slinging at April is just not okay, even if you’re a gigantic ninja turtle.

Jason: I would agree with this assessment and actually my favorite has always been Leo so let’s change this Red text to Blue.

Jason: If I were like you and not focused on the story line and purely used the nostalgia and action sequences to rate this movie, Teenage Mutant Ninja Turtles (2014) would be better than my number four. I will say this: Will Arnett still makes you uncomfortable, not Gob uncomfortable, but still very old man hitting on young women uncomfortable. And though I didn’t like it, the over exaggeration of the turtles individual personalities was probably the only thing that the writers sort of did well.

I actually struggled with the next ranking, flip-flopping between this one and my 3rd ranked movie. I think I have settled on Teenage Mutant Ninja Turtles III. I will call it “Turtles in Time” and it lets you see what it is like for the turtles to go back to feudal Japan. Feudal Japan, you know, where there are samurai, ninja, Daimyo’s, white people trying to sell guns to the natives, and 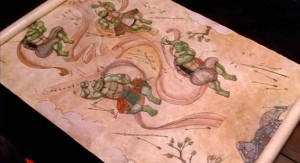 conveniently placed Kappa legends. This is why “Turtles in Time” is my 4th ranked movie; it is bad but the concept is cool and the story in it at least kept my attention when I was a kid. Unfortunately as an adult, either my attention span has gone to shit, or this wasn’t even a mediocre movie and childhood memories have betrayed me.

I agree with Andrew’s assessment that this is a bad movie, even as a child I thought it was the least of the original trilogy. However, it is not the worst movie from the TMNT franchise. This movie showed us that the turtles are legendary conquerors of evil plans and gave us samurai hockey. I salute this movie; samurai hockey was hilarious; but due to the story line, pretty shitty puppet and animatronic work, story line, angry Japanese biker man, terrible props, predictability, and did I mention really shitty story line, Teenage Mutant Ninja Turtles III is my fourth place pick for this ranking.

Below you can find links to other posts from these rankings.