I have mixed feelings about bringing you my next recommendation through “Netflix Nugget”. Whereas the last movie I shared was a very fun trip down memory lane to visit the land of Calvin and Hobbes, I’m going to be cruising down another road of nostalgia to a different part of my past for this one. Growing up in Fresno, I had a lot of Mexican friends; one movie that we watched frequently was American Me. To this day I can’t have a conversation about it without transitioning into an East L.A. accent or depression. However, what are movies if not an artist’s attempt to stir within you some emotion?

This is not a feel-good movie. American Me starts off with a young Mexican zoot-suit woman getting raped by navy sailors and then proceeds to get more depressing. But if you are willing to sit through some of the grittier and more violent scenes, you have the opportunity to see an interesting take on the history of the Mexican Mafia.

This was Edward James Olmos’ directorial debut. It was a very ambitious attempt considering the depth of the subject matter but I’d say he created a compelling film. Following teenager, Montoya Santana, you will watch as he finds himself thrown into juvie, and eventually Folsom Prison, where he is forced to learn how to survive in an environment that is built to prey on the solitary. A lifetime spent inside, what starts off as a group of Mexicans trying to protect themselves, turns into “La Eme”: a prison-run organized crime syndicate. When he is released, he finds it difficult to adjust to life in the real world. After spending the majority of his life confined within the walls of Folsom, he never really learns how to engage with the world at large and realizes that he no longer belongs outside.

It’s amazing to think that three consulting members of the crew were killed over this movie. Due to the portrayal by Edward James Olmos as the lead character, he was also threatened by “La Eme”. They did not appreciate how members of their organization were depicted in the film. The picture that this movie paints is quite somber – there is little rehabilitation happening within the our correctional facilities and, is in fact, a base of operations for one of the most influential crime organizations in the state. The narrative is that of a love letter Santana is 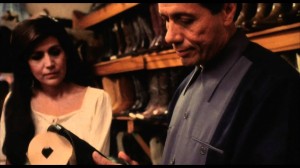 writing to the one woman he connected with during his time on the outside. It is beautifully tragic.

This is not an uplifting film. This is a well-crafted anti-“coming of age” film that looks at the harsh (albeit a bit inflated) realities of both gang violence and the state of our prison system. It was one of my favorite movies growing up; rewatching the film as an adult created an interesting viewing experience after witnessing what gang life did to friends of my past. I can tell you that my younger self looked at this lifestyle through far different lenses than I do today.