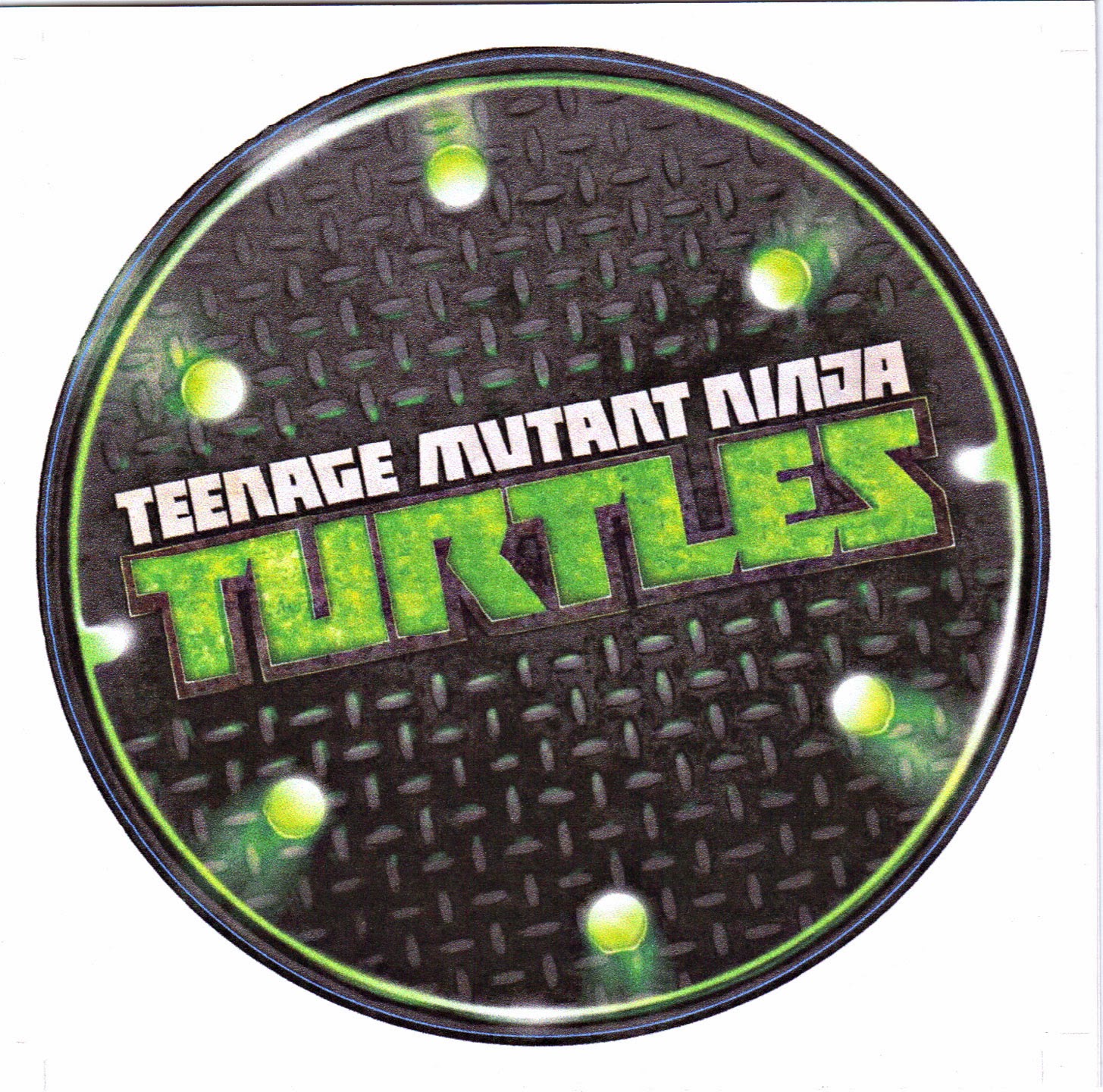 The time has come to announce our Number 1s! It’s been a long journey (seriously, this took forever) and while it hasn’t always been easy, we thank you all for joining us on this ride. Let’s pass it to Jason for the final part of the TMNT Email Throwdown. And as always, please follow these links to read previous parts: Part 1 | Part 2 | Part 3 | Part 4

Jason: We are finally at the end of our TMNT Email throw down.  My favorite movie, from the franchise that has provided so much entertainment for me for the last twenty-plus years, is Teenage Mutant Ninja Turtles (1990). Let’s not confuse this film with the one that came out this summer. As far as I am concerned Michael Bay and associates have completely raped my childhood, more so than George Lucas ever did. 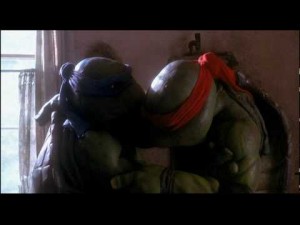 the more die hard TMNT fans watching the newest release in the TMNT franchise. What I noticed watching the films is the original stood the test of time. The movie is not a masterpiece by any means. What it does have is the best plot line and, I dare say it, the best acting from all of the movies. It doesn’t have the slapstick mood that the second film has, no bad plot lines from the third film, a defined and memorable villain unlike TMNT, and no Megan Fox or Michael Bay attachment.

This film depicts the turtles as they are – a unit that at times can become separated by their personalities, who are drawn together because their mutual understanding makes up for their personal weaknesses. You can see that through the plot, as the team is beaten but re-form to become stronger to save Splinter from the Foot Clan. The final fight scene when the turtles fight the Shredder is a great example of the team rising and falling according to their bond. This is what is paramount about the turtles, each individually can be strong but as a unit they are the strongest. 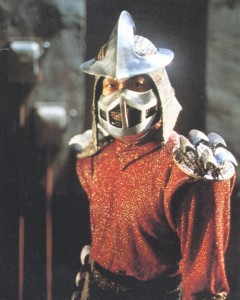 This film also provided the most memorable moments from the films. I especially like the fighting sequences. They definitely aren’t as fluid or visually spectacular as the CGI/2014 film, but the choreography and the stuntmen that did it were pretty amazing. Plus, Splinter taking out Oroku Saki in the end was awesome. In the end, the solid rock that is Splinter uses Shredder’s own anger to fuel his demise. Like the Japanese Proverb, “Though the wind blows, the mountain does not move.”

I said in the previous post that it is difficult for me to find negatives for these films. This is because I have to wade through the good feelings and hours of entertainment that they provided for me as a kid. But in the previous post ranking our runners-up, you made reference to the concept of a “tough, gritty” April O’Neil and I agree. I felt that she could have done more and would have been a really cool addition, if her toughness didn’t seem so much like a front. This also became more apparent when we rewatched the film as a group. They could have done more with this character but other than providing an escape route for the turtles she was pretty much useless.

Doing this ranking has been fun, and at times frustrating. As a die hard fan of the TMNT franchise, when the new TMNT film is released I will probably want to watch it, because I haven’t grown out of the phase of thinking to myself every time I pass a manhole or sewer drain, “I wonder if the Ninja Turtles are down there, and if they would share a slice of pizza with me.”

I will leave you with one last clip and probably the best song to come from this franchise T-U-R-T-L-E Power.

Andrew: Whoa, whoa… easy Confucius. What are you doing throwing out Japanese proverbs in what has been a relatively informal conversation about a pretty juvenile series of films. You can’t be tossing philosophy around all willy-nilly like that.

Reading your review almost makes me want to flip-flop my top two movies. The original definitely has the best song and there are just so many things that go right in that movie. But as good as the first one was, I think every thing comes together much better in the second. In fact, I’m going to use Splinter’s own words to make my point: “You have youth and I have experience. But only those who fight now have both”. The Secret of the Ooze is at that stage of the turtles’ cinematic journey. It’s still fresh but now they know what they’re doing. 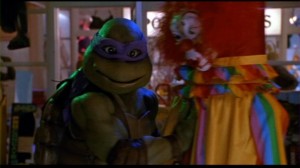 final post because I’m sure you’d have a lot to say about that little statement). The film highlights Donatello a lot more than in the other installments and, with him being my favorite, that scores it a lot of extra points. Seriously, this guy is HILARIOUS (I never get tired of this scene).

For more legitimate reasons… you can start off with the banter. The turtles have a much better rapport, not only with themselves, but with the other characters. Raph becomes a sort of mentor-from-hell for Keno, April has gotten over the “newness” of having turtles around and is starting to get annoyed, Donatello struggles with the idea of being an “accident”, and Michelangelo walks a fine line between charming and stalker-ish. They’re funny but not quite over the top. And Keno storyline is far more interesting than the trainwreck that was the Casey Jones/April O’Neil romance.

Second, the choreography is much cleaner in this film. Take the opening scene. It’s not just the martial arts, it’s the way all their personalities are included in the way they fight. The filmmakers did a superb job weaving some of their idiosynchrasies into the way they interact with their environments. It’s so cool! To top it off, the final fight scene with Toka, Razar, and the Foot Clan is just awesome. My only complaint is that there wasn’t a final battle with the Shredder. As awesome as Super Shredder looked, a throwdown would have been a welcome addition.

One more thing that puts this over the top for me is the introduction of mutant villains. The cartoon always had Bebop and Rocksteady and one of the disappoints of the first move (for me at least) was the omission of other mutants. Seeing the infantile but overpowered wolf and snapping turtle really added a fun element to the film. 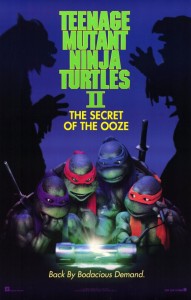 So without further ado, I declare Teenage Mutant Ninja Turtles II: The Secret of the Ooze my TMNT champion. And since I’m writing last, that makes it so.

When I started this experiment, I didn’t realize how miserable i would be having to discuss Ninja Turtles with you. Boy am I glad this is over (Just kidding people, this was tremendous fun). If the readers actually stuck with us this long we’ve really got to take them out to pizza. But seriously Jason, let’s go drown our Ninja Turtle passion in a sea of beer on life-rafts built of pizza… Things just got weird.

This concludes our inaugural (and based off of this experience, potentially our last… yeesh) email throwdown. To read the other parts or, this exercise in its futile entirety, please click the links below.