Andrew: This has got to be the dumbest idea we’ve had. We just finished our stupid TMNT Rankings are we’re going to start another one of these stupid email threads? We need new ideas. But for now…

Dude, how awesome was that show? My biggest complaint is that we didn’t bring enough beer to last us the whole night. That’s the last time I listen to my wife in regards to drinking! But from the moment I walked into the Bowl I thought, “Man, they really brought it for this thing.” Donuts 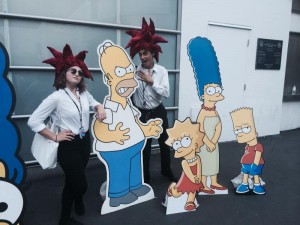 hanging from the trees, cardboard cutouts of characters saying obnoxious and witty things, and the drove of Simpsons fans mindlessly spending their hard-earned money to basically watch a glorified clip show. It was as glorious as a genuine, bona-fide, electrafied, six-car monorail! What else can I say?

Jason: I agree, I think we are gluttons for punishment moving from one email thread to the next.

You couldn’t be more right. Next time, more beer less food. The show was awesome I couldn’t think of a better way to pay a memorial tribute to the Fox Executives than proving that The Simpsons have outlasted them all! Also I think we saw a glimpse into the future: Ralph Wiggum for Fox CEO. I am amazed that they had so many of the voice actors hosting, awesome. Hank Azaria nailed it. Do you think that there could be a better host? I do have to say that the producers of the show went all out in terms of decorating the place. I think one of the coolest things was the

giant inflatable Blinky. This glorified clip show was totally worth it though. I bet this show would have put Brockway, Ogdenville and North Haverway on the map.

Andrew: Hank Azaria was a perfect host. Because he is known for more than just a voice actor, he was perfect to provide both a face and a voice for the evening. And the Matt Groening intro was very much appreciated. I don’t care what people say, they can take shots at Family Guy all they want in my book!

I am pretty disappointed that Dan Castellaneta did not make an appearance. I mean, it’s Homer for crying out loud! But fortunately they covered up with some pretty cool tricks with the stage and great performances. Watching the border of the stage change as the show moved from act-to-act was pretty awesome. And while there were some great performances to be had, I’ve really got to hand it to the Los Angeles Gay Men’s Chorus, they nailed EVERY song they were in. From “Spider Pig” to “See My Vest”, they really rocked it.

Jason: I agree seeing Dan Castellaneta would have made the night even better. I would have liked to hear Homer’s Voice live. Watching and hearing Hank Azaria perform “Who Needs the Kwik-E-Mart” with the dancing hot dogs was great. I am amazed by the voice actors. They really can pull off the voices whenever they need too. One of my favorite performances of the night was the “Hoax Michael Jackson” performing “Happy Birthday Lisa”. I think for me I just assumed that it was Michael Jackson who sang the song, not Kipp Lennon. I mean seriously, Michael was the voice actor for Leon Kompowsky. I think that there were a lot of quotable moments of the evening, what was was one of your favorites.

Andrew: It’s gotta be Jon Lovitz. He was only on briefly but I thought that he was really good-natured and is a classic Simpsons guest. In particular, my highlight of the night was, “You may also know me from the show, The Critic. You remember that theme song? ‘Doo-bi-doo-bi-CANCELLED’!”. Comedians who are self-deprecating and cheerful about it, man, it doesn’t get any better than that. But Kipp Lennon, he was pretty awesome too. If they ever do this again, I’m definitely buying tickets. Best. Simpsons Takeover. Ever. 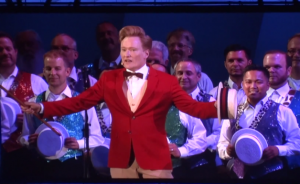 Jason: The most memorable moment for me would have to be Conan O’Brien performing “Monorail.” I also liked that he took jabs at his experience when he decided to leave the writing room, for hosting late night shows. I also really liked the the short “The Longest Daycare,” This was the first time I watched this short. The Ayn Rand School for Tots, has to be the best name for a daycare in the new millennium. We just have to remember that “No Butterflies were hurt during the filming of this short.”

At the end of the night, this show was awesome. As Andrew said “Man, they really brought it for this thing.” The props and decorations for the Bowl were awesome, the LA Symphony was great and the conductor did not mind joining the act, and the performances and pyrotechnics were awesome! If the producers of the show would ever want to do this again I am in. So as all good things must end (except for the Simpson), so does this post. I think that the best way to close this out is exactly how they closed the show, with the “Do the Bartman“.

Thanks for joining us for this brief conversation about the takeover. As you can tell, we both loved it and, despite popular opinion, look forward to another 25 years of The Simpsons!