On a surface level, Interstellar arrives at a right time. It’s not just a time when moviegoers cry out for something truly grand and original amidst all the adaptations; it’s also a time when we need an extra push to explore beyond the skies above, a dream for many that is undercut by increasing cuts to NASA or recent incidents like the Antares rocket or the Virgin Galactic rocket plane. It’s a time when we need to see inspiration and vision more than ever.

Now, put Christopher Nolan’s name into this equation, and what’s promised is a mouthwatering potential, a marriage between exhilarating blockbuster and intellectual stimulant. Cinema at its best, challenging and moving us! But alas, as previously mentioned, this is just at surface level. Probe deeper, and the reality is a visually stunning yet frustrating picture, one that never bores yet fails to find its place amongst the stars.

I saw the film in IMAX 70mm film format, which is purportedly the best way to watch the film, and I’m inclined to agree – the space sequences are spectacular in this format, though the constant aspect ratio switch does get distracting. You can choose to watch it in one of six formats, and should you decide to watch it in the same format that I did, here’s a list of all the theaters that offer the experience. In addition, fair warning: there will be spoilers in this review, so if you desire to go into the theater knowing as little as possible, I encourage you to watch the film first and read this afterwards. 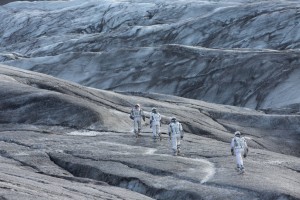 In a not-too-distant future, Earth is slowly becoming incapable of sustaining humanity, as blights destroy crops and families are at the mercy of regularly occurring dust storms. With space exploration being written off as propaganda, mankind no longer values explorers nor engineers, and instead seeks farmers to work the soil to continue growing whatever crops haven’t given way to blight yet. Cooper (McConaughey), a widower and former NASA pilot turned farmer, yearns for a former life while looking after son Tom (Timothée Chalamet) and daughter Murph (Mackenzie Foy). A discovery leads him to a secret NASA installation, where former acquaintance Professor Brand (Michael Caine) asks him to take part in a mission to seek a world in another galaxy where mankind can eventually move to. Doing so means that Cooper won’t see his family for a long time, devastating Murph in particular. But he promises her that he will return, even though he himself knows it will be difficult to keep.

Interstellar perfectly encapsulates Nolan’s capabilities as both a director and writer. He’s ambitious when it comes to envisioning and building a world, aiming to instill in his audience a sense of awe, to make us unconsciously grip our seats in sheer thrill so that we remember a specific moment. That’s a trademark of a capable and confident director, and it works absolute wonders in the film for certain sequences. On the other hand, he – and perhaps along with brother Jonathan, also a writer here – appears to progressively struggle when it comes to telling his story clearly, leading to a glut of narrative problems. 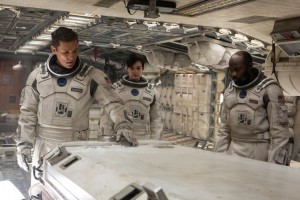 To be frank, the film’s story is clunky, even bordering on sloppy. It glosses over a bunch of factors that play a significant role in the storytelling process, which made my suspension of disbelief drop many times. For one, its characters, both those who are onscreen and those being referred to, are thinly drawn. The crew of four sent on the mission – Cooper, Amelia Brand (Anne Hathaway), Doyle (Wes Bentley), and Romilly (David Gyasi) – do not have defined roles and thereby make it difficult to gauge relationship dynamics on board their spacecraft, the Endurance. It’s later brought up that Amelia was in a relationship with someone who was sent on a previous mission, but he’s hardly ever mentioned. From that, the film loses an emotional strand, which proves to be critical when she delivers a cheesy, thudding monologue about love. The film also uses some characters – whom I won’t mention here – in either odd or predictable ways.

Most damning (warning: big spoiler ahead) is the film’s treatment of a deus ex machina. In regards to the wormhole that the team must traverse through, it’s stated that some beings formed it to help humanity. The film teasingly hints at their presence a few times but never expands on it, and then proceeds to not only return to it, but rely on it completely for its climax, leading to a rushed ending that’s essentially tied up and presented in a neat bow, à la Steven Spielberg. It’s far-fetched because it’s explained cheaply and not given time to settle in the mind, and that’s a huge storytelling sin, especially for a film that isn’t intentionally abstract. 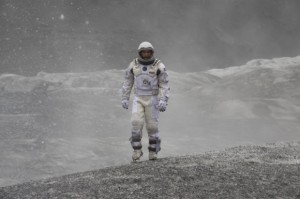 Criticisms of Nolan’s storytelling in previous films, such as plot holes and exposition-heavy dialogue, are again present here. Originally, the mission was all set to go before Cooper came along, and suddenly Professor Brand wants him to pilot it, soon after seeing him? Why send a crew of four, especially when their roles aren’t defined? The film, inspired by the works of theoretical physicist Kip Thorne (an executive producer and consultant here), has its characters rattle off scientific babble that seem to be a CliffsNotes-style version of the actual theories involving wormholes, black holes, and relativity.

I won’t go into the film’s science, simply because I am in no way qualified to judge in that field. I’ll simply forward this matter to those who know this matter much more than I do. It does appear, though, that as the story gets bigger, the more it liberally handles scientific fact – but that’s to be expected with any sci-fi pic.

In the buildup to the film’s release, I noticed how much the previews were emphasizing emotion, more so than the plot and scale. I figured at the time that it was Nolan answering the critics who have described his films as emotionally distant or not handling an emotional core well. With Interstellar, the emotional beats can border on overwrought and sappy here and there, but it all comes down to how a performance sells it. 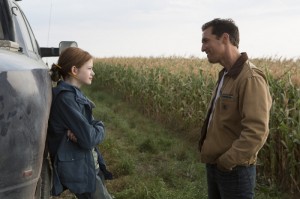 With that being said, the film’s emotional core works tremendously. This is ultimately the story of a parent being away from his children and not being able to see them grow. It’s a testament to McConaughey and Foy, who put so much heart and sincerity into the relationship between Cooper and Murph. With the story staying on Earth for most of the first hour, this talented duo wisely use the time to show just how close the father and daughter are, and why their separation is so heartbreaking. Kudos also to Casey Affleck and Jessica Chastain who, despite never physically sharing the screen with McConaughey, expertly unravel the grown children’s attitude and emotions towards their father. Every scene that exhibits the relationship between Cooper and his children is executed to perfection. 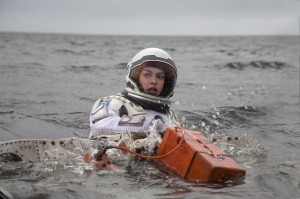 Storytelling clunk aside, the film is an astonishing visual and audial experience. Having filmed a good chunk of the film on IMAX cameras, Nolan utilizes the format to great effect by emphasizing scale. Cinematographer Hoyte van Hoytema’s shots of Saturn, a wormhole, or a black hole, all cast upon a canvas of stars and blackness, are breathtaking and reminiscent of special effects legend Douglas Trumbull’s works on 2001: A Space Odyssey, which this film alludes to a good amount. When the story is planetbound, Nolan’s penchant for location shooting makes worlds of water and ice a marvel to behold. The film’s world and technology are grounded by his preference for practical effects, making them utterly believable. Hans Zimmer’s experimental and rousing score hits all the right notes in making this adventure a thrill. 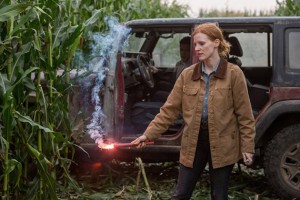 I’ll be honest: it’s difficult to review a film like Interstellar, since it shines in some aspects and falls completely flat in others. It’s an exhilarating watch for sure, but its gamut of narrative shortfalls drag it down and prevent it from breaching the upper atmosphere. It’ll easily be Nolan’s most divisive film, in which one’s reaction to it will say more about he/she values in film much more than the film itself. I will say that I’m glad Nolan made this film, and I encourage people to watch it; it shows that he seeks to challenge and entertain his audience on an ambitious scale, and that’s a victory for cinema. As to whether this will spark an increased interest in space exploration, that remains to be seen. I do believe that I will appreciate the film more as I revisit it from time to time. And yes, revisit Interstellar, I shall.

* All photos courtesy of Paramount Pictures