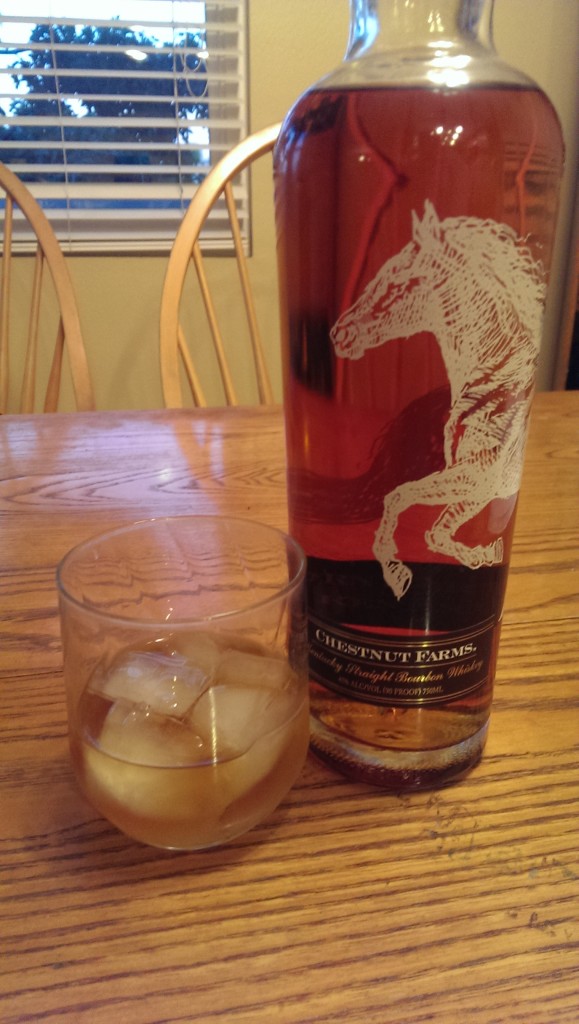 In addition to beer, I am a lover of all things bourbon. Periodically I’ll be sharing some reviews on various bourbons I’ve had the opportunity to try. I will be basing my reviews not just on flavor but also the value of the bourbon based off of price and availability. For example, if I paid $100 for a rare bottle of Pappy Van Winkle (I wish!) and it ends up tasting no better than a bottle of Jim Beam, the Jim Beam would be rated higher because, hey, at least it’s cheap.

So let’s get started with our first bottle of bourbon: Chestnut Farms (90 Proof).

This was purchased as a gift for me when by our real estate agent when we moved into our condo. If you’d like a bottle it will run you about $50 at Total Wine. When I try bourbon for the first time at home I tend to try it in two ways: neat first, with water or on the rocks second. The reason being is because I feel that with good bourbons, you can get two distinct flavors if you try them both ways.

The Smell: It smelled pretty harsh to me. Mostly alcohol. By my third inhalation, I sensed some maple and vanilla. Also, just a bit of oak.

Neat: It’s was pretty straight-forward. Considering it’s only 90 proof, I was surprised by how harsh the alcohol flavor was. It starts off with a slight caramel flavor. The finish had a very strong burn. Didn’t notice much else.

Rocks: Because of how harsh it was I opted to drink it on the rocks instead of with a splash of water. This toned down the alcohol considerably but it also hurts when trying to taste more subtle notes. However, it helped this bourbon considerably. The first sip provides that sweet, caramel flavor and it finished with a bit of a smokey, peppery taste. Much better with the ice.

BOTTOM LINE: I would not recommend this bourbon. It’s not that it’s particularly terrible but for $50 you can get a decent small batch bourbon that will be more complex and less harsh. Still, it’s not a bad bourbon and I’m not ashamed to have it in my collection.