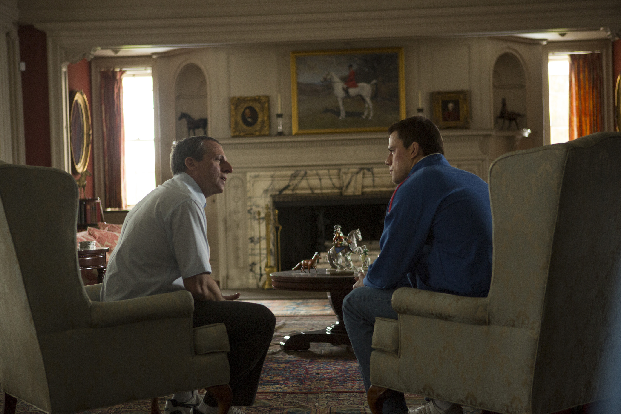 Where there is comparison, there is competition. Where there is competition, therein lies a mentality of winning versus losing. Look no further than sports, where we see it front and center, as fist pumps and victorious chants are always juxtaposed with hung heads and tears. Imagine the amount of effort and time that these professional athletes invest in themselves leading up to that key moment. What does winning and losing mean to them? This mentality is subtly and tremendously personified in Foxcatcher, an engrossing and sad picture that stands as one of the year’s best films.

Based on true events, the film follows Mark Schultz (Channing Tatum), an Olympic Gold-winning wrestler who lives in the shadow of older brother Dave (Mark Ruffalo), also an Olympic Gold winner. He barely scrapes by, and nearly everywhere he goes, people don’t give him more than a second glance, much less admiration and respect. Out of the blue, he is summoned by the wealthy John du Pont (Steve Carell), who offers him the opportunity to train for the World Wrestling Championships and the 1988 Olympics. Attracted by the idea of proving himself and becoming his own man, Mark accepts, and his decision sets all three men on a path that leads to tragedy. 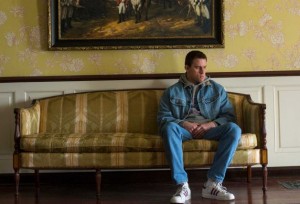 Although Foxcatcher does take some creative liberties (warning: spoilers in link) in crafting its story, that doesn’t stop it from being a superbly made and resonant film. Director Bennett Miller, known for helming Capote and Moneyball, takes on an approach of showing rather than telling, and it works absolute wonders. Dialogue can tell the viewer so much about character and plot, yet it’s either used minimally or – in some scenes – is completely absent in the film. Instead, so much is revealed in actions and body language such that we come to know what’s going on and what’s at stake simply by observing what’s on the screen rather than being told. That in turn helps the film immensely in maintaining an extraordinary level of intensity despite it being a slow burn. When that intensity does build up to the climax, it comes suddenly and with shock. My only complaint is that the final ten minutes or so are rushed, but the film’s emotional power nevertheless stays. 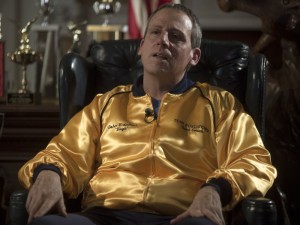 From a plot standpoint, the film doesn’t necessarily have one; it’s a character study, where the drama comes not from a conflict, but rather the characters and their relationships, and the themes develop from those. Both Mark and John possess a winning vs. losing mentality that is reinforced by a desire to achieve a sense of significance, with Mark looking to prove himself as the best and John vying for his mother’s (Vanessa Redgrave) affection. Their competitors? Dave for the former, and horses for the latter. The need for this significance eventually outweighs  winning and losing, as a victory brings respite and a loss a reminder of their insignificance. They rely on each other, but their relationship is anything but stable since they treat each other as mere stepping stones toward their goals. The only direction they can go is down.

Foxcatcher is a thematically rich film, and there’s more at play here than just the psychology of a winning vs. losing mentality. John’s whole life was bought and paid for, and he continues that by throwing money at people, hobbies, and objects to make himself feel important. His wealth, though abundant, is incapable of exorcising his loneliness, as literally no one likes him. That’s his inescapable tragedy. Both John and Mark see themselves as patriots, as the du Pont’s family history dates back to the American Revolution and the Schultz brothers represented the U.S. in the Olympics, yet no one else sees them that way. The two surround themselves in American flags and employ patriotic rhetoric to get others to care, when it’s really just a way to inflate their egos and goals. 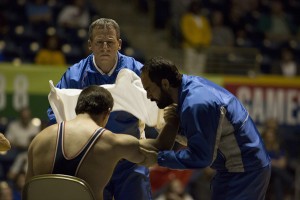 As thoughtful as Miller’s direction is, he recognizes that the film’s power must come from his actors, and so he focuses on three restrained yet breathtaking performances from Tatum, Carell, and Ruffalo.

Just as the past few years saw the rise of Michael Fassbender and Matthew McConaughey, Channing Tatum establishes himself as an actor to watch. With his glares, shuffling body, hunched posture, and clenched jaw, he effortlessly communicates Mark’s anger and frustration. When he’s vulnerable, he rigidly but passionately explodes, emanating fear and loathing. He puts forth a complete body performance.

An unrecognizable Steve Carell, under layers of makeup and prosthetics, is downright unsettling. He adopts an awkward and demanding personality, and follows that with  appropriate diction and body language, from placing pauses in his speech to putting on blank-faced stares when conversing with others. That’s what makes his transformation into a creepy, pathetic, and spoiled man-child so convincing and honest.

Last, but certainly not least, is Mark Ruffalo. 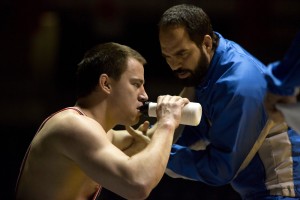 Calm and sincere, he plays the role of a family man with utmost integrity. What’s subtle in this role is the bashful modesty that hangs over him; it can be sensed when he’s playing with his kids or greeting people, and it’s a testament to Ruffalo’s abilities that he’s able to bring that trait out to make his presence so warm and meaningful.

The production itself is completely at the service of the actors and Miller’s vision. There’s nothing lavish about the picture, and everything – from production design, lighting, and music – is restrained or solemn so that it lines up with the film’s tone. 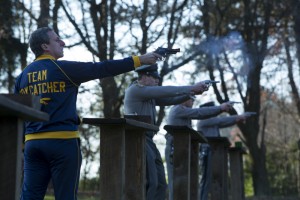 As one can imagine, Foxcatcher isn’t a pleasant, uplifting watch by any means, but it is a eloquent film that carries remarkable emotional power. What we’re witnessing isn’t an inspirational story like most sports films, but rather a tragedy about two men struggling to achieve significance, and how winning vs. losing ultimately doesn’t matter on that path. It’s a human story, one that stays with us long after the credits roll.