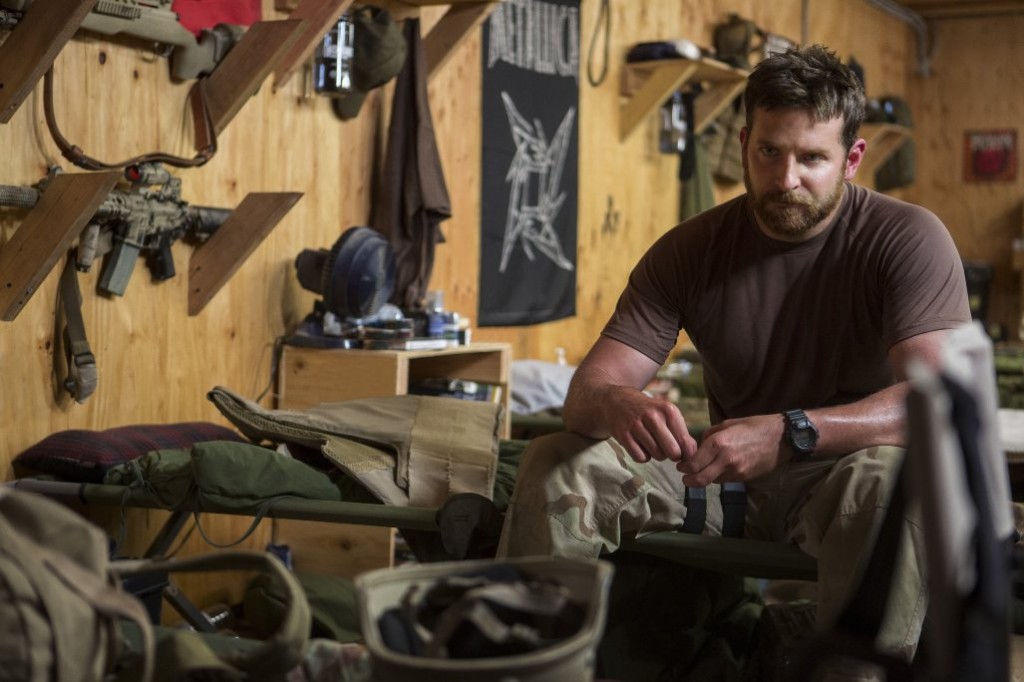 Chris Kyle (Bradley Cooper) isn’t one to back down from a challenge. His father tells him at a young age that there are three types of people in the world: sheep, wolves, and sheepdogs. Chris believes that he is a sheepdog, that it is his duty to fight evil when it preys on the helpless. Seeing reports of terrorist attacks on American embassies in Tanzania and Kenya inspires him to enlist in the Navy SEALs, where he naturally excels as a sniper. He meets and marries his wife Taya (Sienna Miller), and is deployed to Iraq soon after. His accuracy with a sniper rifle saves and takes away countless lives, and it isn’t long before a bounty is placed on his head. All Chris wants to do is protect his fellow soldiers, but he discovers that mission will conflict with his responsibility to his family, who want him at home.

I imagine that director Clint Eastwood and screenwriter Jason Hall’s intention with the film is to pay tribute to a soldier, particularly what he did and how it affected him. The film’s screenplay is quite reverent towards Kyle, but it seems to be more concerned about what he does more so than the effect it has on him. Consequently, it portrays him as a one-note character; he’s simply someone who wants to protect his comrades and kill the bad guys, and that’s all he is for the entire film. There’s no effort to make him a dynamic character, and as a result, he barely registers as a human being. Anyone who has ever read a book or watched a film or play knows that characters without flaws are boring, and those who feel that way with Kyle here are justified.

The real Chris Kyle’s life is fascinating, but here, it’s nearly impossible to answer why a film is being made about him. While I haven’t read his autobiography, I’ve read many articles about him, from the time he stepped into the limelight, to his death, and finally to this film’s release. To say the least, his life was messy, but therein lies a complexity to him. I can’t shake off the feeling that the script constrains the film version of Kyle to the point where he is politically correct to a fault. With the film, the only times when I felt that he wasn’t a saint is whenever he refers to Iraqis as savages.

That’s not to say that the screenplay is downright terrible. I think that from the character arc and plot structure standpoints, it would make perfect sense. Sure, it’s predictable, routine, and very much by-the-numbers, but it has the elements to work. However, it stutters because the way that it treats Kyle means that he doesn’t come alive as a character. What hurts even more is that the film has plenty of opportunities to develop him and to peel his layers away, but it rushes through them. For me, the film’s strongest material comes towards the end, when Kyle is wrestling with his PTSD (Posttraumatic Stress Disorder) and eventually helps out fellow veterans who too are struggling to adjust to civilian life. Nevertheless, that screenplay not only crams that material to about 10 minutes, but also airbrushes it. Why? Is it to maintain this image of Kyle as a saint? It sure feels like it to me.

The screenplay clearly lays out its themes, but doesn’t bring them to a satisfying closure. While I do think that it nicely shows how soldiers balance their duties to their country and families, it doesn’t spend as much time as it should when it comes to portraying Kyle’s time at home and Taya’s emotional turmoil. An unrecognizable Sienna Miller does well with the scenes she has despite some clunky dialogue, but she stays a flat character. Ditto for Kyle’s children, who share only happy moments with their father. It appears that the film also wants to focus on how killing affects the soul, but it doesn’t know how to show that. Kyle is placed in positions where he has to turn his gun on and kill women and children, but it’s not clear whether that affects him as much as seeing the atrocities of war and the men next to him die. Moments like those are compelling in and of themselves, but they don’t point or lead anywhere. Even Kyle’s kill count remains just that, a number. There’s no weight behind it, and to liken it to scores in online multiplayer games is easy, which is a disturbing thought. I’m sure many people will accuse the film of being jingoistic, but I got the impression that it is an anti-war film because in no way does it ever feel like it glorifies the conflict in Iraq. 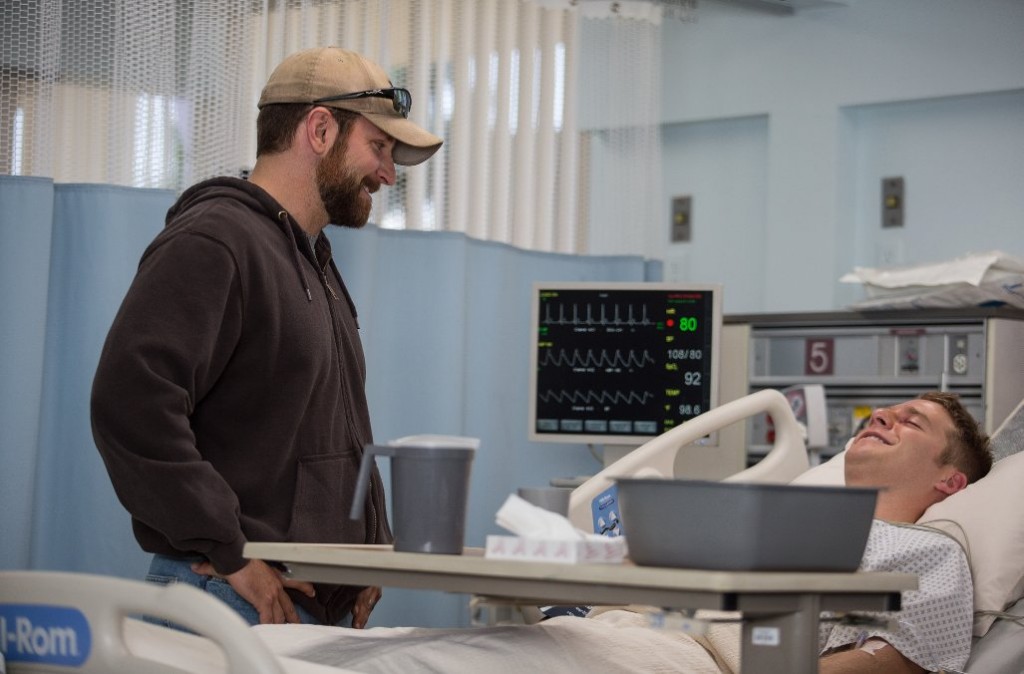 Bradley Cooper single-handedly prevents American Sniper from being a mediocre film. It’s clear that he was fascinated by Kyle, seeing that he played an instrumental role in getting the film developed, and it shows in his performance. He does what he can to make Kyle dynamic and human, and those efforts lie in his Texan drawl, his gentle giant demeanor around those he loves, his sense of humor, his frankness, his concern for his fellow soldiers, and his haunted gaze. It’s a rich performance – easily Cooper’s best to date – and thoroughly deserving of his Academy Award nomination for Best Actor.

The film spends a sizable chunk of its runtime following Kyle’s exploits in Iraq, and the sequences are absolutely intense. It nails the terror that comes from urban warfare, especially when snipers are involved; there’s always tension whenever U.S. troops are clearing houses or even exchanging jokes while patrolling the streets, as the threat of them coming under pinpoint sniper fire – from typically unknown locations – is constant. It’s the atmosphere, achieved through precise editing and sharp sound design and mixing, that makes for some some downright harrowing sequences in the film. I would even go so far as to say that this is perhaps the best portrayal of modern urban warfare on film since Black Hawk Down in 2001. 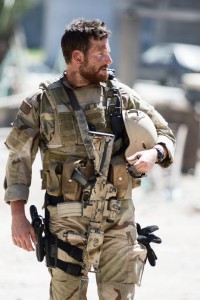 To me, American Sniper feels like an appropriate companion piece to another Clint Eastwood war film, Flags of our Fathers. They deal with similar subject matter and themes, as they portray war heroes and their significant actions, and follow their endeavors to compromise the horrors of war with the discomfort of being back home. They also share one flaw: they only scratch the surface of the characters they attempt to honor. To truly come to know and understand a character makes his story worth telling, and both films don’t do just that. The difference, though, lies in one thing. Flags of our Fathers had a lot of compelling material to cover and understandably had to skim through most of it. American Sniper, on the other hand, doesn’t have that excuse. The film has the impetus of making Chris Kyle a figure to empathize with, but it chooses not to go down that route. Instead, it portrays only one side of him, and that’s hardly captivating.