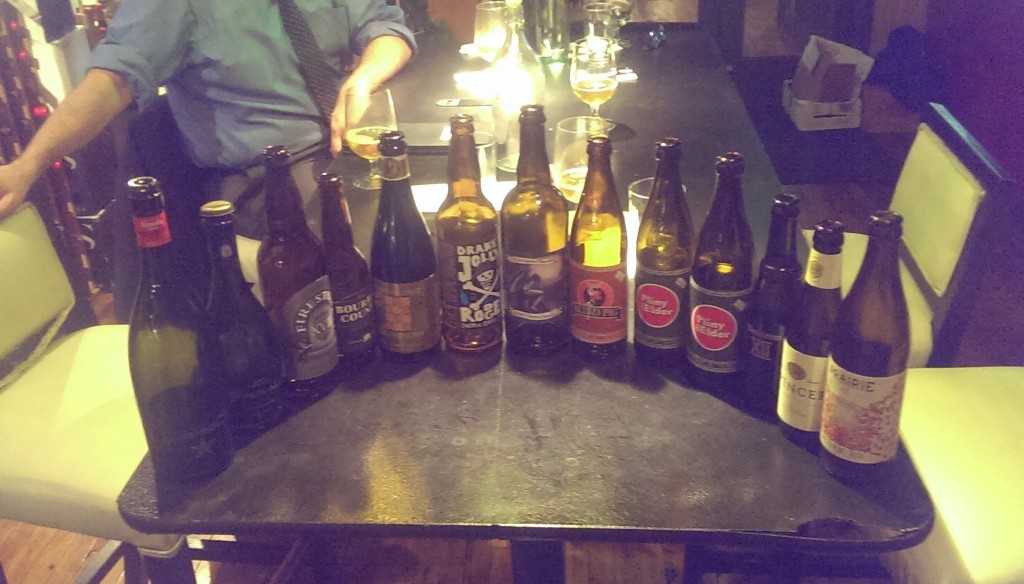 Firestone Walker Sucaba 2012 – An amazing beer. I had it at the Firestone Walker Anniversary event. It’s been aged two years which has really mellowed out the heat from the high alcohol content. I love barleywines and this is probably the best one I had all year. A nice balance of bitterness, hops, and subtle chocolate notes, this baby was on point. I eliminated it from contention because it was brewed two years ago and I don’t really consider it a 2014 beer. I also wanted to keep my list of beers to things that are a little easier to come by.

Bourbon County Stout – Another tough omission, it has a very warm coffee flavor and a smooth taste despite its alcoholic content. The bourbon flavor comes through without overpowering the flavors of the stout. Surprisingly, it was not that difficult to find this bad boy being poured all over the Inland Empire and Orange County. Omitted because (spoiler alert!) a different Bourbon County beer made the list ahead of it. 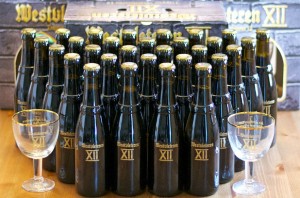 Westvleteren XII – A lot of people are going to be unhappy (a lot? who reads this blog anyway?) with this omission but, despite how amazing this beer is, I can’t call it one of my favorite ten. Top ten most well made? Definitely. Hints of fig and honey. Take a sip and the flavor just sits on your palate forever. I mean, you’re tasting it two minutes later. The flavor evolves as you continue to let it mellow. It’s a total experience. So why is it not in my Top 10? Because I just happen to like other flavors more than this one provides. But this beer was a joy to drink and is also worth the hype. Definitely a better showing than Pliny the Younger (when it comes to hype).

Alright, time for the main event. I’d like to reiterate that this is a subjective list and I that I don’t feel that these should be your favorite beers. However, I do believe that you should try them all if you find the opportunity. 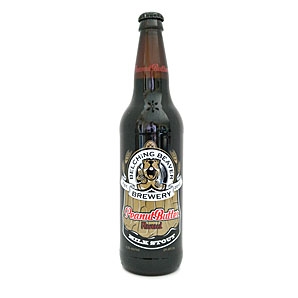 I love dark chocolate. I love peanut butter. This beer combines the flavors of both. It’s definitely not for everyone but with my tastes, it was the perfect beer for me. I’ll drink it alone, drink it with a meal, pour it over vanilla ice cream… on a bus, on a train, on a plane… hell, any goddamn time of day. It’s just so delicious. You can read my tasting thoughts in a previous edition of “I Need a Beer” here. It’s one of the rare beers that I can open and even my wife will say she wants some. Do yourself a favor, if you like the flavors I mentioned above, give it a try.

Homer pick of the year

This is my go-to IPA. Am I a bit of a homer because my place is a quarter-mile walk from Valiant? Maybe. But I will never tire of this beer. Take a whiff. The aroma of Simcoe and Amarillo hops gives it a vibrant nose. After smelling it, I couldn’t wait to try it. The taste? Hop forward but not overwhelmingly so. It’s got bright citrus and tropical fruit flavors to it. The malty flavors balance it out so that it finishes smooth. It is very drinkable. Would you guess that it was almost 9%? Probably not. I’d call it a sessionable beer if it wasn’t for the fact that it’ll get you drunk after two or three (not me though… I’ll take this all fuckin’ day). Just a great showing by a great brewery. 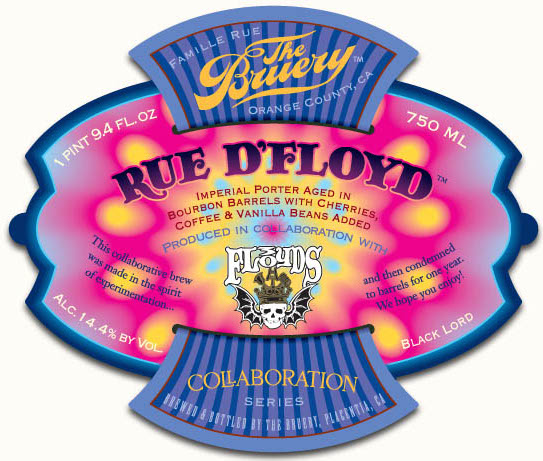 That is one bad beer…

A beer that I might say separates itself from even the rest of the top ten, this was an amazing collaboration between two heavy hitters in the craft beer world. If you haven’t heard of Dark Lord (Three Floyds) or Black Tuesday (The Bruery), then you’re obviously not drinking enough barrel-aged beer. This one’s a porter but it’s every bit as robust as the stouts both of these brewers offer. Aged for a year and then supplemented with cacao nibs, vanilla beans, Portola coffee, and cherries; this beer is a wonderful collection of smooth, rich, and warming flavors that get cut with the slightest hint of dark fruit tartness. It’s sweet, but not overwhelmingly so. Another one in the line of, “wait, how much alcohol is in that?”, don’t get caught throwing these back too quickly (you’ll want to, believe me) or you’ll end up forgetting most of your night. 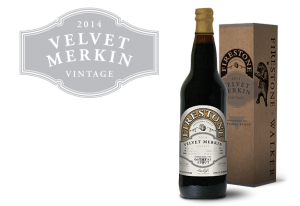 Despite being bourbon barrel-aged, this beer is not very hot. Coming in at a cozy 8.5% abv, it’s lack of heat does not detract from wonderful flavors and drinkability. I’ve always been a fan of Velvet Merlin (the none barrel-aged version) and the caramel, vanilla, and slight smokiness that is added through the aging process really allow the beer to sing. I’m a big oatmeal stout fan because it adds a bit of creaminess to the stout but without the heaviness that a milkstout sometimes gives you. Velvet Merkin is probably the smoothest beer on this list and should be purchased every time you see a box available. 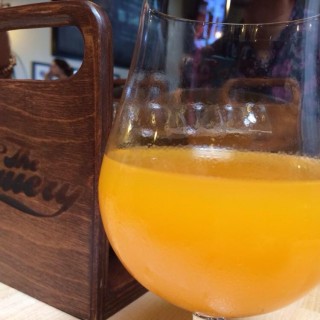 I’m normally not a huge mango fan but they really knocked this one out of the park. Looks more like punch than a beer, the pureed mangoes are really the highlight of this beer. Yes, this beer is tart – but it’s so much more. The sweetness of the mango, the crisp tartness, the smooth mouthfeel; they all combine to make a truly unique beer drinking experience. It’s very fragrant and has a very elegant simplicity to it. It’s almost like when a chef uses a key ingredient – the mango is the star. One of the many reasons that The Bruery is my favorite brewery. 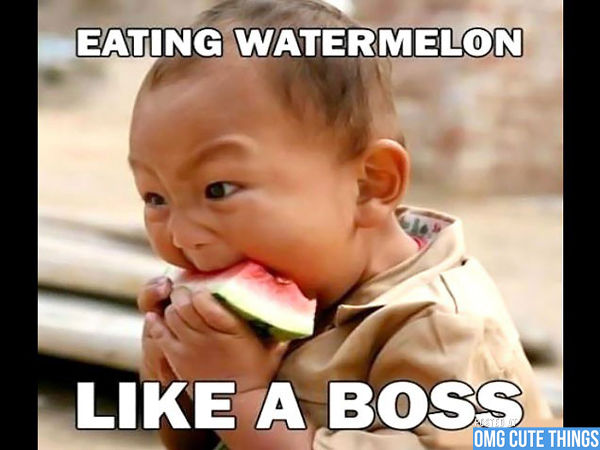 Watermelon beer. Bleh. Like mango, I’m not actually big on watermelon. And, as you can infer from this list, I don’t really like blonde beers too much. But boy, was this one well-executed. Brewed with real, fresh watermelon (no extract!), this is a perfect summertime beer. While I don’t love watermelon, I don’t deny that one of my favorite things in this world is the crisp, juicy flavor of ripe watermelon on a hot, summer day. The messiness as it drips all over your hand, the thirst-quenching goodness, the cold crispness when it’s just removed from the fridge. Very few things can mirror that feeling. This beer gives you that experience. It’s clean, it’s crisp, and has a very straight forward watermelon flavor. A perfect summer beer. 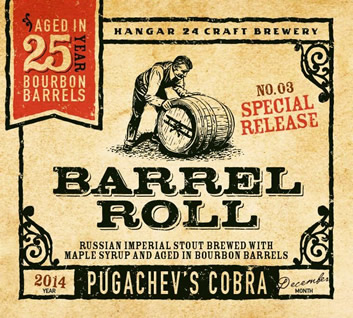 Not to be taken lightly…

I just got done sharing a few lighter, crisper, more refreshing beers. This one… it’s none of those things. This is kick-you-in-the-face-with-no-apologies type of flavor. Pugachev Cobra is already one of the more bold stouts you will try and their 25-year old barrel version wants you to take it seriously. A bit hot, the bourbon flavor is very front facing. Enjoy it a little more and you’ll get strong vanilla, coffee, and dark chocolate notes. Keep drinking and appreciate the subtle sweet flavors of boulder fruits and raisins. It finishes with just a hint of maple syrup. I made the mistake of having a pour of this in their tasting room at lunch and it’s definitely a beer I should have cleared my schedule for. 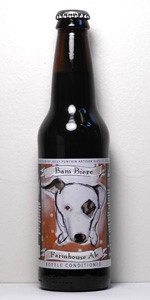 New things to taste with every sip.

Switching gears again, I’m bringing it back to light and crisp. Jolly Pumpkin focuses on farmhouse and wild ales and though there were multiple Jolly Pumpkin beers that struck my fancy this year, Bam Biere really struck a chord with me. It’s not too heavy, not too hot, and not too bitter. It’s remarkably complex. Just smelling it takes you on a journey. It starts off fruity on the nose with citrus and lychee aromas. Take another whiff and you’ll smell the funk and spice that you come to expect from a farmhouse ale. Take a sip. Upon first drink, it really reminded me of those lychee jelly snacks I grew up with. Lychee flavors with a hint of coconut, it’s very easy to drink. However, it finishes very dry with hints of vanilla and nutmeg. I love it! A harmony of funk, sweetness, and spice; this beer is truly a work of art. 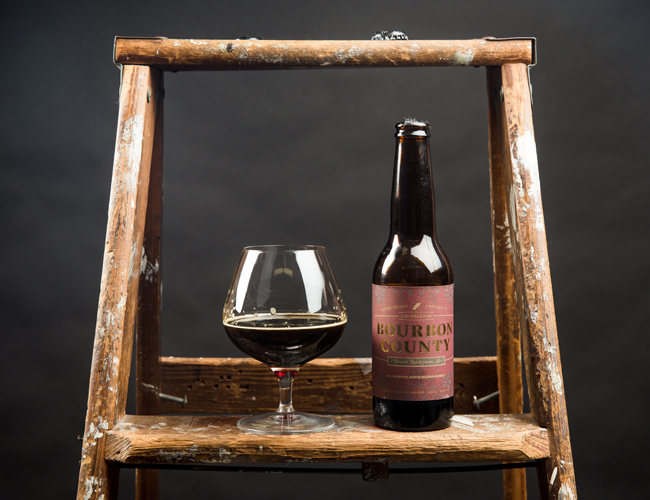 This beer is a beautiful thing.

Wow. What a great beer. Smoky, oaky, strong, complex, delicious… this beer is amazing. A barleywine that has been aged in the barrels of their Bourbon County Stout, this remarkable beer combines the earthiness of an English Barleywine with the coffee/caramel flavors of a rich stout. A robust beer, this thing could be a meal by itself. Very full-bodied. Although the bourbon and vanilla are the strongest flavors, subtle notes of spice and fruit can be detected in the finish. Seriously, what a great beer. 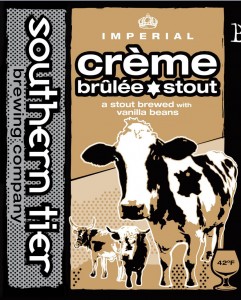 For my final beer, I’ll finish with a great dessert beer. A milkstout brewed with vanilla, its namesake is no misnomer. Fair warning, this beer is quite sweet and is probably better in moderation. But it is perfectly executed. It’s like drinking a rich vanilla custard. Smooth and sweet, it pairs great with anything you’d eat with vanilla ice cream. The flavor finishes with just a touch of bitterness and char. Much like the crispy top of creme brulee, it cuts the richness of the custard with a sharp bitter flavor. Very well done. The perfect beer to finish off a meal and this list. 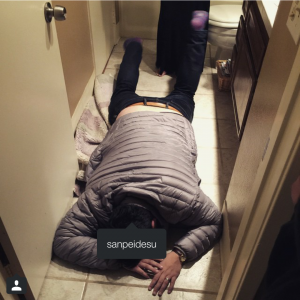 Sometimes I drink too much…

I hope you’ve enjoyed my beer journey through 2014. Remarkably, I tried over 600 beers in 2014 (Jesus, I’m an alcoholic) and these beers were the cream that had risen to the very top. All of them were memorable and left me wanting more. They were not the ten best beers that I had but they were the ten that left the most lasting impressions on my year of excessive drinking. If you’d like to share your beer-drinking habit with me, find me on Untappd under the handle “caliroll” or on Instagram under the handle “sanpeidesu”. Until then… Cheers!