Avengers: Age of Ultron has a lot of expectations to juggle. It’s the follow-up to the all-time biggest superhero film, so moviegoers naturally anticipate a bigger, grander picture with new characters. It’s tasked with pushing the MCU (Marvel Cinematic Universe) narrative closer to the inevitable showdown that we’ll see in the two-part Avengers: Infinity War. Director and writer Joss Whedon said he’s looked to Star Wars: The Empire Strikes Back and The Godfather Part II, arguably two of the best sequel films, as inspirations. I’ve never seen so much coverage regarding a film’s opening weekend box office prospects since Avatar. Under such pressure, it’s naive to believe that the film won’t buckle, and buckle it occasionally does. Nevertheless, this globetrotting flick never fails to entertain with its relentless action and energy, even though its reach exceeds its grasp. 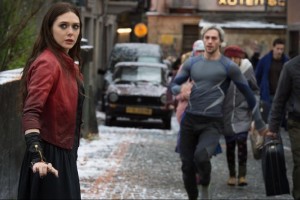 In the fictional Eastern European nation of Sokovia, the Avengers – consisting of Steve Rogers/Captain America (Chris Evans), Tony Stark/Iron Man (Robert Downey, Jr), Thor (Chris Hemsworth), Bruce Banner/Hulk (Mark Ruffalo), Natasha Romanoff/Black Widow (Scarlett Johansson), and Clint Barton/Hawkeye (Jeremy Renner) attack a Hydra outpost to retrieve Loki’s scepter. During the raid, they encounter the Maximoff twins Pietro (Aaron Taylor-Johnson), who runs with superhuman speed, and Wanda (Elizabeth Olsen), who manipulates minds and throws scarlet energy blasts. The latter compromises Stark by having him experience a vision of his worst fear: another alien invasion of Earth, this time having defeated the Avengers. Driven by his fear, Stark enlists Banner in using the scepter to complete a global defense program named Ultron (James Spader). Ultron unexpectedly becomes sentient, and thereby decides that the only path to peace is humanity’s extinction. He convinces the Maximoffs to assist him by tearing the Avengers apart from the inside, forcing the group to confront their own demons and fears before they can fight as a team.

In terms of pure entertainment value, Age of Ultron goes above and beyond to deliver. If you want action setpieces, fear not, as the film definitely has them in abundance – in four different continents, no less. It even drops us right into an action scene as it starts, showcasing a sequence that not only outstrips this one from the first Avengers film, but also feels like it was lifted straight from the pages of a comic book. And wait until you see the fight between Hulk and Stark’s Hulkbuster suit – it’s the stuff dreams are made of. These, combined with a surprisingly brisk pace, make the experience all the more fun. If you want witty one-liners and humorous moments, you’ll find those here too, though I find them to be funnier in the first film. If all you ask for are thrills and laughs, the picture certainly caters to you. 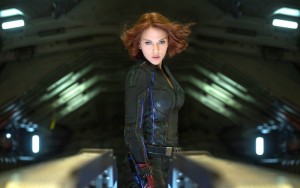 As a relative newcomer to Whedon’s work (I’ve only seen the first Avengers, The Cabin in the Woods, and technically Toy Story since he was one of the writers for that), I find a lot to appreciate him as a screenwriter with this film. The first comes with the way that he handles humor, and I don’t mean his snappy dialogue; instead, it’s the way he brings it full circle. A post-party scene early on involving Thor’s hammer begins one such circle, and the fact that the subject comes up again several times later on to finish the circle is an example of smart humor with a purpose. I admire how he fleshes out his minor characters like Helen Cho (Claudia Kim) by giving them unexpectedly larger roles in the film’s narrative rather than dropping them in a couple of scenes to push the plot forward. I also like how he grounds the Avengers’ objective in not defeating the villains, but instead protecting and saving people. Doing so highlights the nearly impossible nature of their tasks, and I can’t shake off the feeling that the film raises a giant middle finger to Man of Steel and its near-dismissive treatment of human lives.

Given that the previous films in the MCU already focus primarily on Captain America, Iron Man, and Thor, Whedon uses Age of Ultron to showcase those who do not have their own films. Black Widow is vulnerable like we’ve never seen her before, as we witness the events that pushed her into her line of work. Whedon builds upon what we already know about the fearful, testy relationship between Banner and the Hulk (who looks more organic this time around), making them both more complex characters. None benefit more than Hawkeye, who has the honor of delivering some of the film’s best lines and is the one that the story mainly revolves around. This shift in character focus are great opportunities for Johansson, Ruffalo, and Renner to shine, and they step up big time. 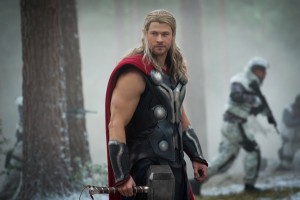 I really wish I could call Age of Ultron a great film, but I can’t because it doesn’t fully work as a complete film. It has the unenviable task of covering so much material vying for attention that it simply can’t cover them all to a satisfying level. Though it clocks in at 141 minutes, it’s evident that it was meant to be a much longer film. It’s been reported that the first cut came in at roughly 165 minutes, and there’s material in there that would put more flavor and meat here. The Maximoffs’ backstory is told and cast aside in less than a minute, Thor goes off on a severely underdeveloped side journey of sorts in the second act, and I don’t fully buy the budding romance between Black Widow and Banner, though I admit the last one doesn’t pull me out of the picture. I understand that there may be reasons why the film comes up short in those moments (most likely editing decisions made by either Whedon or the studio, or both), but they stick out like a sore thumb.

The film’s best and most significant scenes are found in the human moments, both lighthearted and tender, because they showcase character dynamic and gel the entire film together; that’s what makes the first Avengers work so well. I don’t think there are enough of those here, especially since the film is very heavy on action. While Whedon manages to introduce the dark nature that The Empire Strikes Back and The Godfather Part II are known for, what’s missing here is the personal, visceral experience that’s needed to elevate that nature like in those two films. That’s why I look at Age of Ultron as a film where the plot is in control more than the characters. 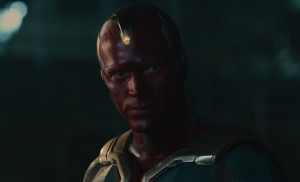 Introduced are a host of new characters, and Whedon incorporates them into the story with somewhat mixed results. As I mentioned before, rushing through the Maximoffs’ backstory relegates them to flat, underwritten characters for most of the picture. Taylor-Johnson and Olsen need good material to chew on, and because they don’t really have any material at all, Pietro and Wanda aren’t memorable. On the other hand, the character of Vision (Paul Bettany), brought late on, is absolutely fantastic. Unlike the Maximoffs, he benefits from strong material – which includes a softly spoken monologue and the film’s most memorable scene – and naturally grows as a character in the narrative.

What really disappoints me is the big baddie himself, Ultron. I’ve heard a lot of my friends focus only how great Spader is when they talk about the character, and I find myself compelled to address this. To an extent, they’re right; Spader’s honeyed, sardonic voice is perfect for Ultron’s dialogue, but it reflects his personality and not his character. Yes, Ultron has some terrific lines, but I never get a sense of who he is. What’s his internal struggle? What makes him compelling and unique? Why should I care for him? Having answers to those questions is what makes Loki and the Daredevil series’ Kingpin such fantastic Marvel villains. It doesn’t help matters that the Ultron in the film’s previews is more threatening than he actually is; he’s all bark and no bite, and his sole purpose is to move the plot forward. 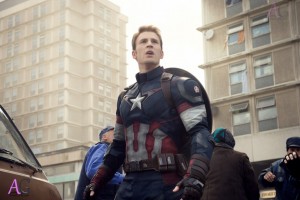 The film does lose a bit of steam when it attempts to bring in the rest of the MCU, specifically the Infinity stones and the looming threat of Thanos. Such scenes feel obligatory and slapped on, and they clash with what is already happening. The same goes for the post-credits scene (there’s only one, by the way). I’ve read The Infinity Gauntlet comic book series and ergo know who Thanos is, so the moment when he puts on the gauntlet made me extremely giddy. However, I will say that for those who aren’t into comics, that scene doesn’t work, especially since the other MCU installments haven’t developed the character into the menacing force that he should be. I do love the way the film ended, and I’m excited to see where the Avengers go from here.

Avengers: Age of Ultron has the action and scale that a powerhouse superhero ensemble film should have, but those get in the way of the character-building it needs to intensify the experience. It does run into the danger of becoming a bloated film like last summer’s The Amazing Spider-Man 2, but it knows which directions to steer toward, and I think Whedon deserves major kudos for that. He has confirmed that he will not return to the MCU, and considering all that he had to go through to make this colossus, I can’t blame him for throwing in the towel. At least he can leave with his head high.