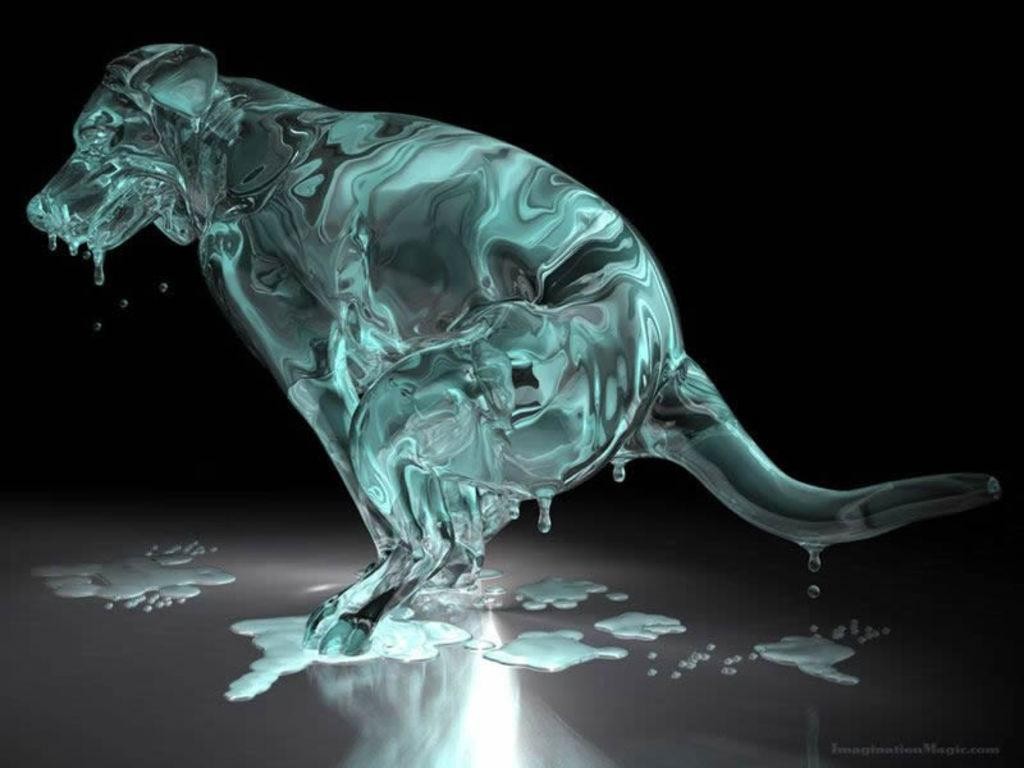 When I moved to Upstate NY and saw that I had a large pond in front of the home I would be living in, I thought it was awesome. Then I remembered I had a not-quite-two-years-old boxer who does whatever the fuck she wants. That’s when the nightmares started. It’s a cold, snowy day and Evie is running around outside and then crack-yelp-splash, she’s falling through the ice and I can’t get to her. I’d wake up freaked out and panicked only to realize that it was just a dream and Evie was in California.

Well, Evie is not in California any more. She’s here. And the first day I took her outside, she ran on top of the pond. Yup, it’s her world and she don’t care if I want her to be safe, she’s running where she wants. Fortunately it was cold as hell and the ice held. However, two days later, it was a balmy 60-degree day and we’re out for a walk. And that is how our story begins…

When Evie first arrived it was below freezing. It was ludicrously cold but the novelty of the snow kept Evie more than engaged. Sprinting across the terrain, a cloud of snow in her wake the only evidence that some creature had gone through; she was all over the place – including running on top of the icy pond. Now the first few days it was cold as hell (well, hell is supposedly not that cold so let’s go with cold as the Abominable Snowman’s left ear, because ears always get cold and no one is colder than that guy). So her running on the pond, pissed as it made me, was not dangerous because the ice was still very thick. Fast forward a few days and the weather is sunny 60-degrees. And that’s when it all went down…

We’re walking back from an extended trek across our area of the North Country (that’s what it’s called where we live) and we’ve just reached our front yard. As I walk towards the house, I realize I’m missing something about 2 ½ feet high, excitable, brown, and a little bit dirty. Evie, as “independent” as she claims to be, usually doesn’t like to be out of sightline with me so I figure I’ll give her a call and a whistle and she’ll come running.

So I haul ass towards the pond and sprint up the ridge that overlooks it getting more and more freaked out by the second. I reach the top and look around to find Evie. I look down at the pond and that thing I told you I was having nightmares about… you remember that? Yup, I looked down and there it was:

A dog-sized hole in the ice. No dog in sight. 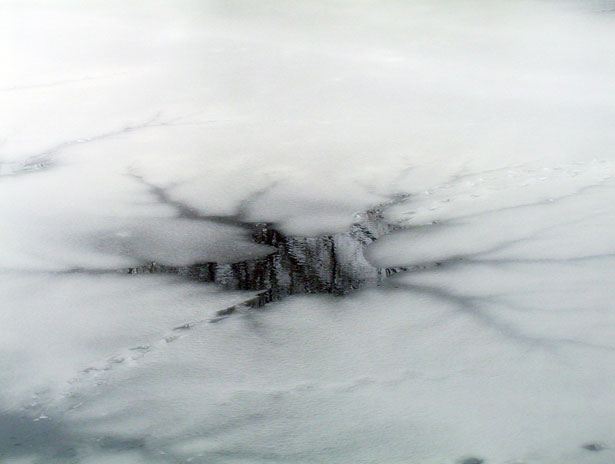 As I evacuated in my undies (just kidding, but it felt like it), I started sprinting towards the edge of the pond screaming her name. Still no dog, just the hole. No bubbles… no water movement… nothing. I reach the edge and am getting ready to jump in and then it happens – her head pops up. I breathe for the first time in what felt like 20 minutes (it was probably about 45 seconds) and seeing as the hole is only about five feet away from shore, I jump in. And wouldn’t you have it… the little bitch starts swimming in the opposite direction.

“Oh daddy is chasing me. Can’t let him catch me. Let’s see how long we survive in the cold water.”

Anyway, the water is up to my chest and I chase her down. I think she’s starting to realize this is not fun. Surprisingly enough the water doesn’t feel too cold but that could also be because I’m so freaked out I’m not paying attention. So I drag her out of the pond, carry her over the ridge, and put her on the ground. She sprints into the garage (first considerate thing she’s done all day) and I start drying her off. I immediately run upstairs and start running hot water in the bath and give her a warm bath to try to bring her temperature up. I dry her off, heat up some broth, and wrap her in some blankets as she curls up on the couch, shivering.

Then I hit the internet. “What to do when your dog falls through ice.”

Here are the key headlines:

OWNER DIES ATTEMPTING TO SAVE DOG FROM FROZEN RIVER – DOG SURVIVES
MAN IN ST. LAWRENCE COUNTY DROWNS SAVING DOG FROM FROZEN POND – DOG LIVES
WHY YOU SHOULD NOT ATTEMPT TO RESCUE YOUR DOG WHEN THEY FALL THROUGH THE ICE

That last one might be may not have been an actual headline. But you notice the running theme from all the stories? Owner dies. Dog survives. 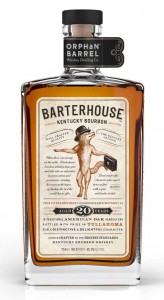 diot, I call the emergency pet hospital line. They ask me a few questions and the long and the short of all this is that Evie was going to be fine, she just needed to warm up.

Having just gone through one of my worst nightmares, I think it’s about time for a drink. That’s right, I need a beer bourbon.

What, you thought a beer would cut it?

Anyway, I opened my bottle of Barterhouse bourbon and while it is delicious, looking back I have the perfect bourbon in mind for this incident: Stagg Jr. 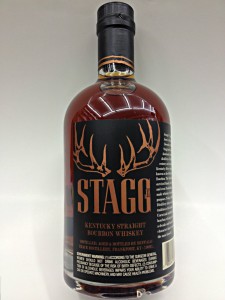 Stagg Jr is 134 proof (67% alcohol). Stagg Jr starts harsh, hits you in the nose with a bit of sweetness, and finishes the opposite of smooth (I think the word is harsh). Not in a necessarily negative way, but in a way that says, “you need to know that you’re drinking a hot bourbon, and you need to know now.” Hints of cherry, vanilla, and oak; Stagg Jr stands out from the crowd because it is high proof and it doesn’t care that you know it. Unabashedly strong.

After the ordeal I had just experienced, I needed to get kicked in the face a little bit. Unfortunately, Stagg Jr was back home in California. Lucky for me, I had a solid backup.

Sorry for the bait and switch guys. But that was a pretty shitty day – a beer just wasn’t going to cut it.