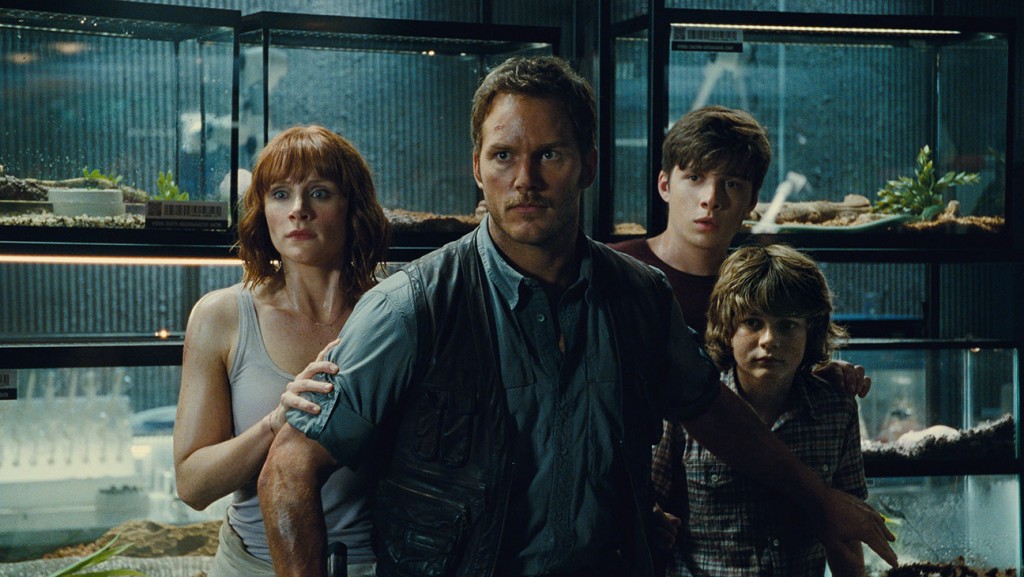 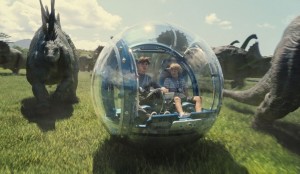 It’s extraordinary how Jurassic World feels quite similar to Jurassic Park. It follows the same trajectory – beat by beat – as the first film did, from an ominous opening sequence to a deeply satisfying climax. Although executive producer Steven Spielberg’s fingerprints are all over it in the form of children as key characters, a broken family, and a sense of wonder, director and co-writer Colin Trevorrow makes the picture stand on its own by amping the terror and introducing a B-movie idea that sounds incredibly absurd and stupid on paper, but surprisingly manages to work quite well. The film hits the ground running, and from there maintains a breathless pace to keep the plot moving. There isn’t a single boring moment here. 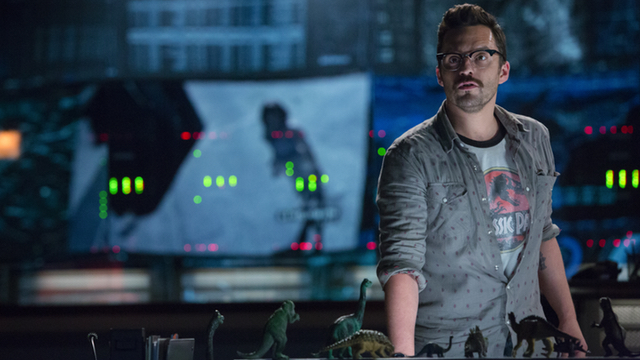 From watching the film, it’s quite apparent how much Jurassic Park means to Trevorrow, and Jurassic World is his love letter to the franchise. He expresses that love in a ton of carefully placed, intentional references to the the other three films, and the great thing about them is that they’re subtle and don’t detract from the story at hand. Such references range from props to shots that hearken back to moments and things both big and small in the earlier films, and trying to catch them all is a giddy Easter egg hunt that you would typically see in only superhero films. 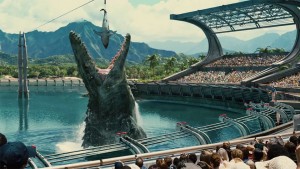 It has been said that Jurassic World is the start of a new saga (a sequel is all but announced at this moment), and a fresh take on the material should bring forth new themes. Obviously, the theme of humans lacking control over nature is always going to be an encompassing theme over all films both new and old (okay, Jurassic Park III is the only expectation because that one is a slasher flick), and it certainly plays here. Two other themes go hand in hand, and they are corporate greed and the audience’s desire for something new that’s bigger and has more teeth. I’m not entirely convinced that the film fully develops these two sufficiently because it features only a handful of scenes where the characters address them, though the latter works on an ironic level because it points at the modern moviegoer’s attitude to movies nowadays and also the film itself. The film does effectively explore the relationships between humans and these animals, which is typified by Owen and the Velociraptors, and gives weight to scenes involving these two parties. 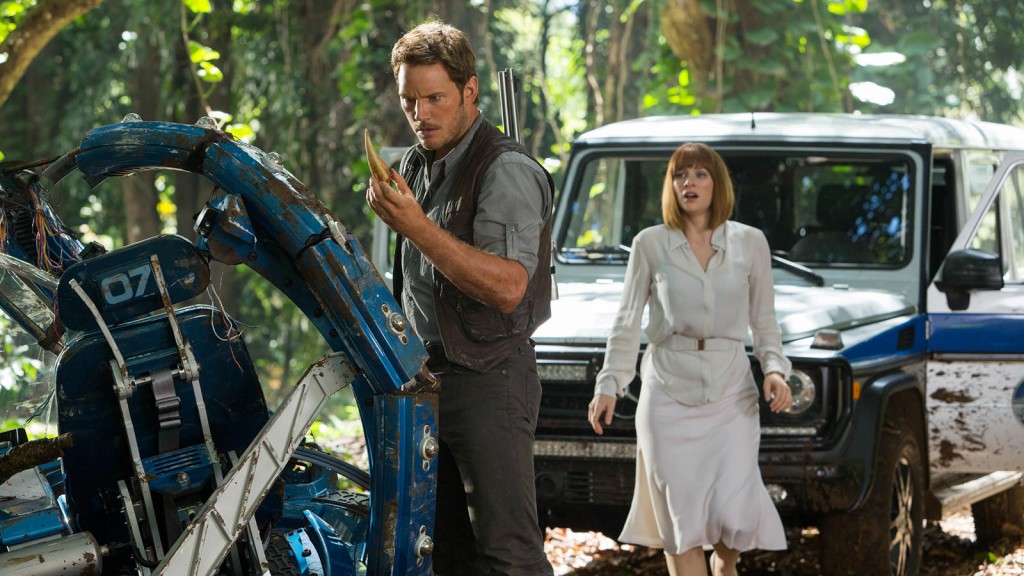 Now, the franchise has always been driven by the human characters’ decisions, and this film is no different. I don’t think the characters here are as annoying or stupid as the shrill parents from Jurassic Park III, but considering that the film rests on the fact that a theme park has been operational now for a good number of years, it’s hilarious how the numerous staff commit tremendous oversight and experience logic gaps when it comes to guaranteeing the visitors’ safety, with examples including the circumstances of the Indominus’ escape and the complete control the visitors have over the park’s gyrospheres. Yes, you can argue that such decisions are made in the heat of moment, and you can also say that without these decisions, the adventures wouldn’t exist in the first place, but it’s striking how so much hangs upon the characters’ inabilities to keep their heads on their shoulders, especially in this film. 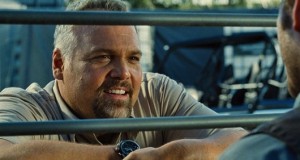 Unfortunately, in a film as fun as this, the human characters take a backseat to the chaos taking place. I know, I know, you don’t watch the Jurassic films for the humans, but look how the characters in Jurassic Park ground that film. Each character has an arc, and it’s great how Grant and Sattler subvert gender roles. In Jurassic World, Claire is the only one with an arc, but it feels forced and doesn’t develop naturally. It’s great that Trevorrow and co-writer Derek Connolly attempts to empower her, but that progress fizzes out since she isn’t really recognized for her heroics. Everyone else begins and ends as a two-dimensional character, with the exception of Lowery (Jake Johnson), the park’s operator who does a bit more than provide well-executed comic relief. I think it’s cool that the story brings back Henry Wu (B.D. Wong), but he doesn’t register here. Most disappointing here is Hoskins, who is so ham-fisted, he’s basically a B-movie villain whose intentions and purposes aren’t convincing in the slightest. Hell, the Velociraptors are more compelling than all of these human characters, and they don’t have much to work with at all. 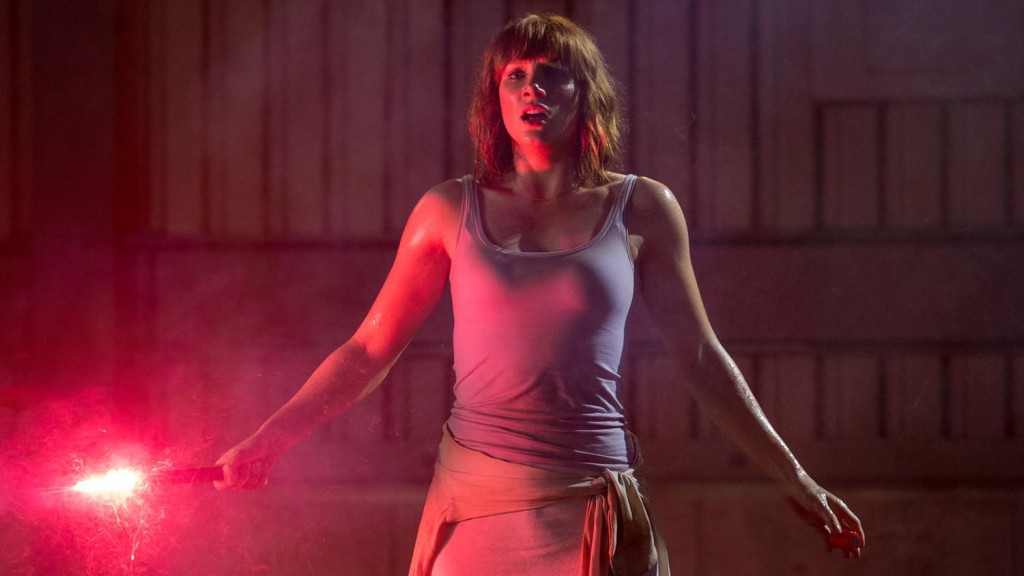 As far as the film’s cast goes, there aren’t exactly any standouts, considering that their characters aren’t particularly well written. Howard nails Claire’s organized and stiff demeanor, before shedding that cold exterior quite nicely to make her character more human. Pratt channels a more serious Star-Lord, and deftly hits the right notes in both the comedic and dramatic moments. I do like Khan’s performance as the thrill-seeking and well-intentioned Masrani, as he commands his scenes without being too authoritative. For an actor as talented as D’Onofrio, it’s embarrassing how he’s given such a bland and near-unnecessary character. 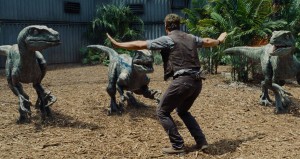 It’s amazing how this is only Trevorrow’s second feature to date (his first, Safety Not Guaranteed, was made for less than $1 million), because he shows that he has the chops to direct exhilarating sequences. When it comes down to the dinosaurs facing humans or dinosaurs facing each other, the action that ensues is energetic and absolute fun. In the buildup to such scenes, Trevorrow ramps up the suspense in the way that seasoned directors would, and the key lies in the fact that he makes the Indominus quite terrifying. Also noteworthy here is that the film is actually rather brutal and graphic, so props to him for pushing the envelope and thereby making the most violent film in the saga yet. Nothing, though, compares to the film’s epic finale, which is pure cinematic bliss and delivers everything I would want in a Jurassic film. Huge props to Universal Pictures’ marketing team for barely showing anything from the finale in the clips, trailers, and TV spots leading up to the film’s release. 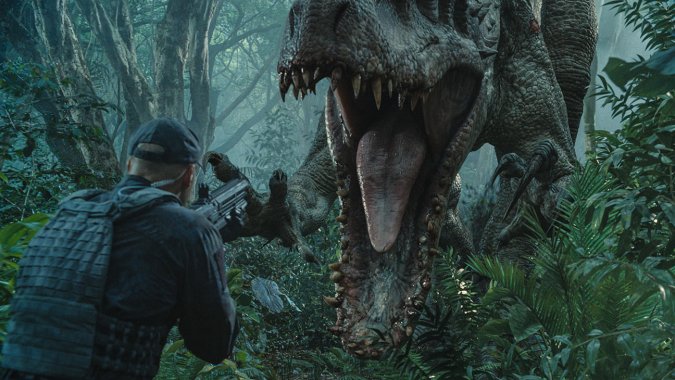 The dinosaurs look great, though I’m kind of saddened how the use of special effects, particularly animatronics, aren’t as prominent here as they were in the earlier films. I completely understand that CGI allows for the dinosaurs’ greater freedom of movement, and seeing them move so freely is fantastic. But to be quite honest, I don’t think they measure up to animatronics when it comes to realism, where I want to see the textures that make up a living being and make it convincing. Again, I’m not taking anything away from what visual effects has done here, as the motion capture used for the Velociraptors make their interactions with Owen and co. incredibly dynamic and persuasive. 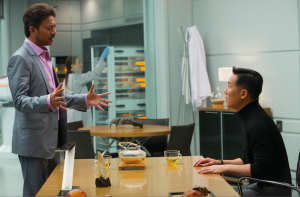 To follow up John Williams’ beautiful Jurassic Park score is an unenviable task, but Michael Giacchino admirably steps up to the task and turns in a score that pays tribute to the original yet stands on its own very well. He incorporates parts of several tracks from Williams’ score in his soundtrack, but it’s the sense of adventure that imbues the whole thing. His score is calming, playful, tense, and full of wonder. I personally love how he brings some of the music from The Lost World: Jurassic Park video game to his score here, which is a very nice touch.

Jurassic World is by no means a perfect film, nor is it a great one. If I didn’t grow up with the Jurassic films, I don’t think it would work for me. But it does. That there is magic: to tap into an inner child, bring him or her out, and watch this with an adolescent state of mind. Is it nostalgia? Sure. Is the film fan service? Definitely. But is it entertaining as fuck? You betcha. This is a film with one audience in mind, and I am a proud member of it.

P.S. I got my entertainment value, Andrew!