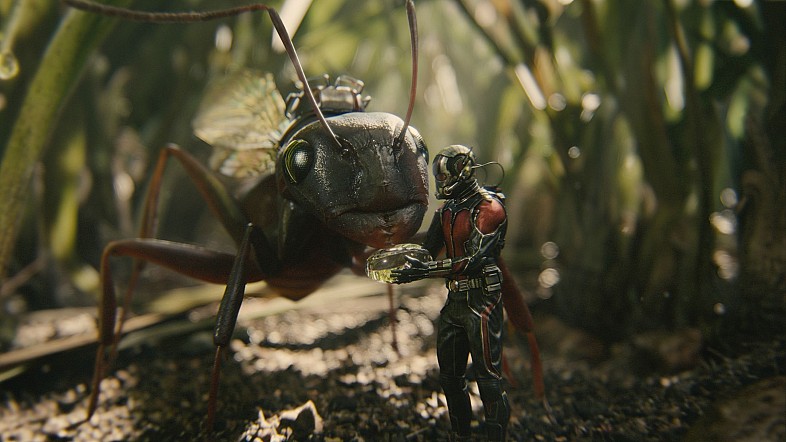 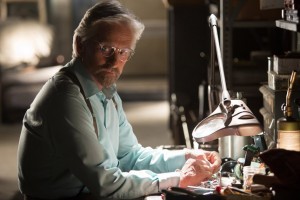 Recently released from prison, Scott Lang (Paul Rudd) decides to put his thieving days behind him so that he can get closer to his daughter Cassie (Abby Ryder Fortson). To earn visitation rights, he must get a job – which comes scarce for ex-cons like Scott. He agrees to commit a burglary and ends up taking what he assumes is a motorcycle suit, which belongs to scientist Hank Pym (Michael Douglas). Upon wearing the suit, Scott discovers that he can shrink to the size of an insect. Having watched him the whole time, Hank recruits Scott to help him and estranged daughter Hope (Evangeline Lilly) steal a similar shrinking suit called the Yellowjacket from Darren Cross (Corey Stoll), Hank’s former protégé. 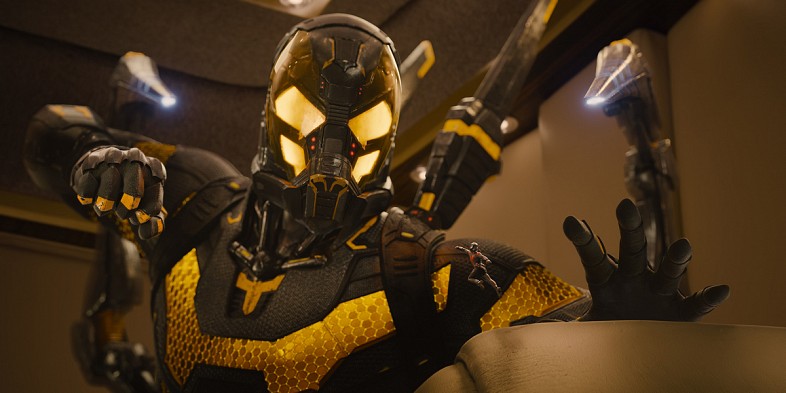 As far as the story goes, the good stuff comes towards the end. Indeed, Ant-Man is a film of two halves: a very flat first half, followed by an energetic second half. That’s not to say that the first half is completely dull, because there are some nice comedic beats to be found, but the way it moves is very paint-by-numbers and clunky. The scenes don’t naturally progress into one another, especially when the character at the heart of a scene is different from that in the following one. This results in an awkward pace, so the film doesn’t quite settle in as comfortably as it should. Unsurprisingly, it finds its footing once the heist itself comes into the picture. While the heist itself is actually unremarkable, it does lead into an absolutely delightful and fun climax. It’s fair to say that the fight scenes in this film are the most creative seen in the MCU thus far, as they utilize even the most innocuous objects in their environments to wonderful effect. 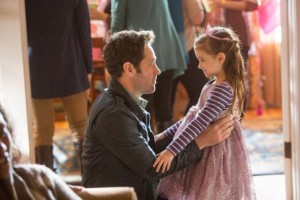 Mirroring its hero’s abilities, the story scales back, and in doing so, it seeks to draw attention not to the setpieces, but rather the relationships between the characters. Unfortunately, the film expects these relationships to become believable by virtue of the viewer taking them for granted, even though some characters are thinly drawn. The father-daughter dynamic between Scott and Cassie actually has little with work with, and the only reason why I can buy it is because Rudd and Fortson share a lovable chemistry. Darren despises Hank for never trusting him fully and wishes to overshadow his former teacher, and that’s all the film ever shows us; Corey Stoll’s talent is absolutely wasted. The beats in Hank and Hope’s relationship is handled with all the subtlety of a blind elephant attempting to tiptoe through a room full of broken glass. As for Scott and the ants (whom the former can telepathically communicate with), I can’t call what they have a relationship since the latter never become characters in my eyes. They bite it by the dozens here, but their deaths hold little – if any – weight at all. Some relationship, huh? 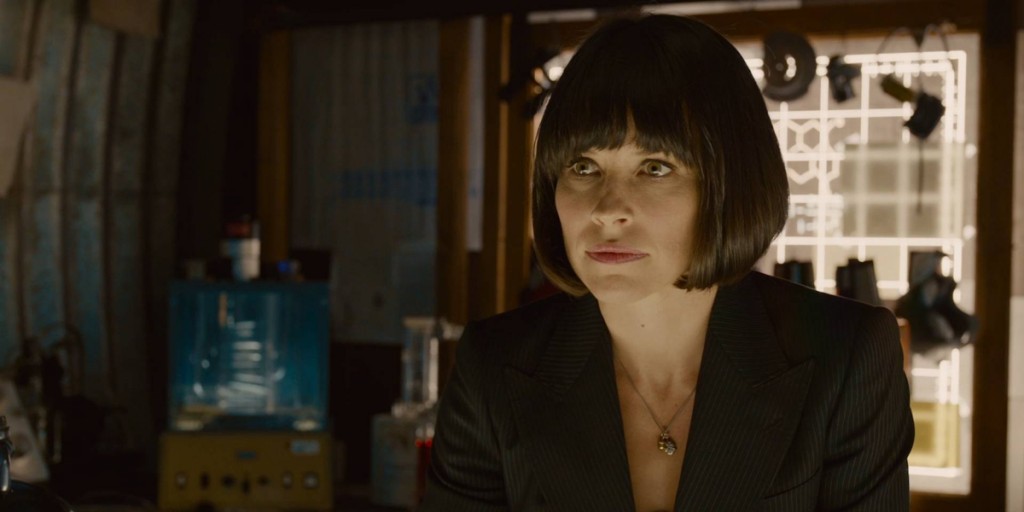 What’s most disappointing is the film’s treatment of Hope, specifically how it builds her up as a great character before shunting her aside. It portrays her as being capable, confident, independent, and smart – traits that Evangeline Lilly’s terrific performance exudes. It even goes so far as to show that she should be the one in the Ant-Man suit, not Scott – a notion that makes absolute sense when you realize that Hank’s idea of recruiting Scott is far-fetched to begin with. Now, I get why Hank forbids Hope to don the suit, and I could vindicate that if Hope actually does something substantial in the heist, but she doesn’t. She has no agency, and it’s a damning storytelling choice given her character and skills. 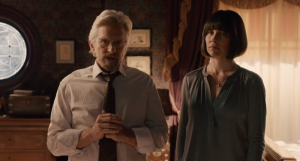 I believe that this is where Ant-Man could have been not just a bold movie, but also a statement of intent from Marvel Studios. Producer Kevin Feige has come under increasing scrutiny over the past few years for not developing films with leading female superheroes who aren’t Black Widow, so this film – given its smaller scale – would have been a great chance to do otherwise. I’m aware that Captain Marvel is part of Phase 3, but keep in mind that it’s coming in 2018 – a full ten years since Iron Man and nineteen non-female-led movies later. That said, introducing a leading female superhero is needed now more than ever. Yes, the film’s mid-credits scene shows (in such an ironic and self-aware manner) that Hope will become Wasp, but honestly, what are the chances of her being a lead character in another film anytime soon? Wouldn’t it be an awesome idea if in this film, Hank gave her the Wasp suit before the heist, thus giving her a more active role (and elevating her to co-lead)? It makes for a more compelling story because both she and Scott have something to prove. Heck, she could fulfill the action part of the climax (destroying Darren’s research) while Scott fulfills the emotional part (saving Cassidy). It’s fair to say that Marvel Studios missed an incredible opportunity with this film, and the film itself could have truly stood apart from the other entries in the MCU in a very meaningful way. 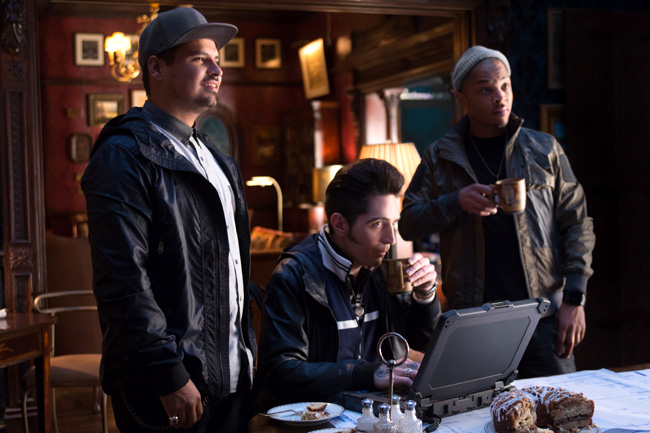 When it comes to the cast, the best performances come from those who nail the comedic beats, since humor plays a significant role in the film. Although Scott doesn’t have much of a character arc, Rudd knows how to make the character click. Not only is he endearing, he delivers his lines perfectly to emphasize the awkwardness that follows. Douglas pulls off exasperation, impatience, and snark with great poise, which is what makes Hank and Scott’s interactions so humorous. Marvel Studios has made it a point to cast respected veteran actors and actresses in all their films so far, and it’s fair to say that Douglas’ performance stands tall above them all. The one who absolutely steals the show, though, is Michael Peña, who plays Scott’s good friend Luis. His comedic timing is just spot-on, and the way he gets animated through his rapid speech and his eyes lighting up is simply infectious. 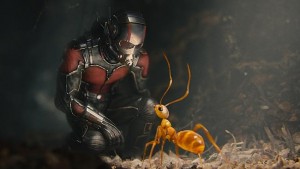 Although Ant-Man is a “small” film, it still needs top-notch visuals to bring its tale to life, but the results here are rather mixed. Some of the CG in certain scenes don’t look very polished or textured, which makes them stick out like a sore thumb. Thankfully, the CG work is much tighter when it matters most: the climax. The film’s opening features a de-aged Douglas, and he looks incredible given that the scene is lit quite brightly. What sticks out to me the most is the film’s overall look because it doesn’t fully complement the tone. Ever since I read this Vulture article about color in superhero films, I’ve been paying special attention to color schemes. Now, the film looks great when we’re in rooms where the colors pop out, but it’s a different story when it comes to places where colors are distinctly desaturated because it looks so drab and dull. Since the film is probably best described as a comedy heist film, bright and warm colors complement that genre very well, but they’re only in supply half the time.

One thing that did stick out to me in this film is how diverse the people are in this world. I saw Asian scientists working in labs, Latinos conversing with Luis and his acquaintances, and a black family playing what looked like ping pong. Granted, none of these are main cast members, and the story is set in San Francisco, a city known for its minority-majority population, but it’s refreshing to be shown a place where the everyman isn’t predominantly white like in the other MCU films. 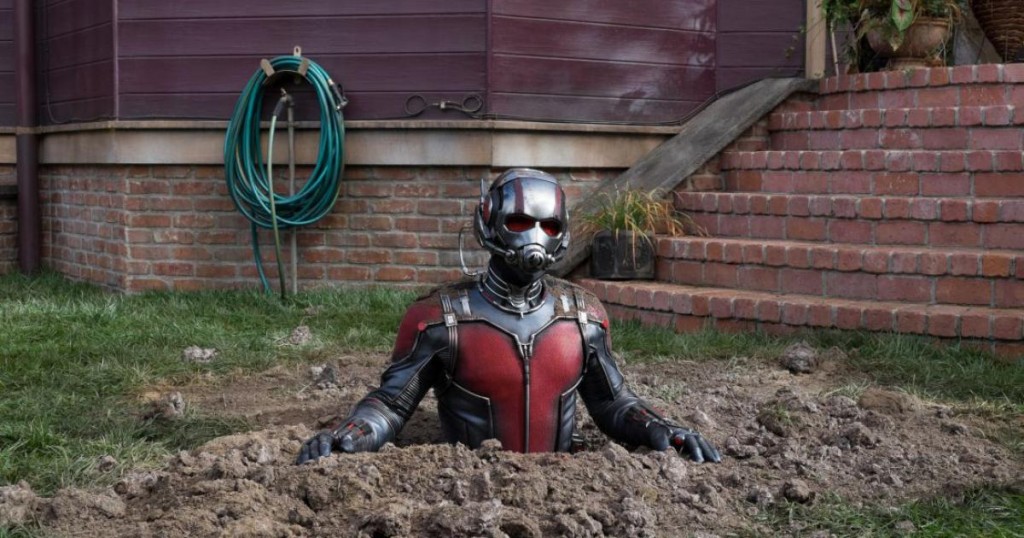 Ant-Man certainly has its moments, but beyond those, it never elevates beyond being standard superhero fare. Most of the cast knock it out of the park, the humor works quite well, and the creatively choreographed climax almost makes me overlook the aspects of the film that fall short. A flat first half, the shallow or mishandled relationships between key characters, and the story’s tasteless treatment of Hope take their toll on the film – but not enough to make the picture flat-out terrible. Given the drama that occurred behind the scenes, I imagine Marvel Studios is just glad that this film is complete and out there for the public to consume after being in development for so long. I honestly think the studio was more concerned with finishing an Ant-Man film than making a very good Ant-Man film. Could this film have been extraordinary? Sure. Too bad it’s just ordinary.

Given that Phase 2 in the MCU has come to an end, I figured I should rank all the films that have come out so far:

I would fit the Netflix series Daredevil right into the #3 spot if TV shows were part of this list. I’ve yet to watch Agents of S.H.I.E.L.D.