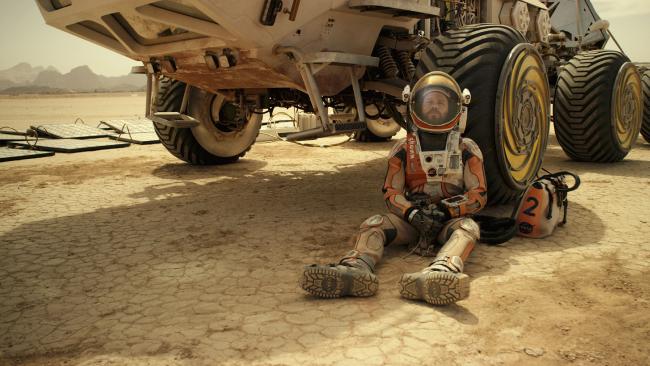 What a time it is for those who desire to be among the stars. Just a little over a week ago, the public looked to the sky to witness a total lunar eclipse, AKA a blood moon. The following day, NASA announced that new findings provided the strongest evidence yet of liquid water flowing on Mars. Public interest in space programs probably hasn’t been this high for a long time, and what better to boost that interest than a blockbuster movie about the brilliant men and women who explore and research what is beyond our planet? Why, if said film turns out to be an entertaining, inspirational, and a mostly scientifically accurate one, which The Martian is. 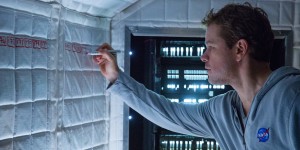 Astronaut and botanist Mark Watney (Matt Damon) is part of the six-person Ares III manned mission to Mars, where they study the planet’s geography in great detail. Not long into their stay, an intense dust storm forces the crew to evacuate. In the process, Watney is struck by debris, and the others are forced to leave him behind when he is presumed dead. Unbeknownst to them, he is actually alive, but he finds himself alone and with sparse resources. After assessing his situation, he resolves to use his knowledge, spirit, and wit to survive and also contact NASA in order to return to Earth. 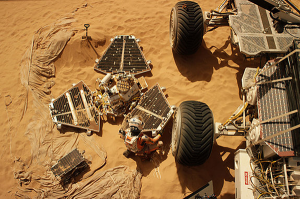 Now, full disclosure: I’ve read Andy Weir’s novel of the same name, which the film adapted. To anyone who’s interested in this film or has already watched it, I recommend that you read the novel. It doesn’t take long to get through, and better yet, it’s also compelling and rich with technical details and processes. Drew Goddard’s screenplay is a solid, streamlined adaptation of the novel, though I found that it doesn’t have the same impact as its source material for several reasons, which I’ll address over the course of this review. 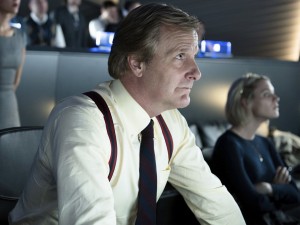 The novel has been lauded for its celebration of human ingenuity and its heavy emphasis on scientific accuracy, and for the most part, those qualities translate well to the big screen. When reading the novel, I found it difficult from time to time to visualize the processes that Watney and NASA brainstorm and enact in order to help the former survive because the details can get very technical. That said, it’s quite nice to see all that come to life in the film, and Goddard, along with director Ridley Scott (who actually helmed a great picture), deserves credit for respecting what serves as the novel’s foundation. However, the film’s breezy pace does dampens the effect that these scenes should have; it doesn’t dumb down the science, but it does rush through them. Part of what makes the novel so engaging is that it’s so thorough about what Watney and NASA do, so I really got a sense of how much effort and time it took to solve these problems, and that in turn intensified the emotions stemming from their outcomes, both good and bad. Since the film cruises through the details and the processes, it diminishes the weight that these scenes should have. Still, kudos to the film for portraying the valuable role that science plays in finding solutions to situations like these – I can’t think of another film that’s done this since Apollo 13. 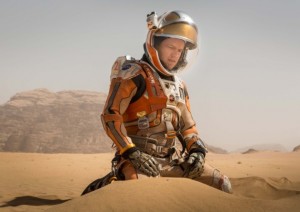 Despite selling itself as a survival tale, the film doesn’t really pull it off. Yes, it’s a survival film insofar as the plot, but the tension and emotional magnitude behind the act of surviving are quite lacking. Truth be told, the film starts off well in that regard, as it showcases the terror of being caught in a dust storm before hinting at the many dangers that the planet holds for Watney. However, about two-thirds of the way through, it comes to a standstill, and survival becomes far too comfortable. It’s at this point that the film slightly deviates from its source material by excising some key scenes, and in my opinion, that demeans the picture. Compounding this is how Watney ultimately isn’t truly alone – once he establishes communications with NASA, contact with other people is at his beck and call. It must be said that the novel’s Watney endures far worse than the film’s Watney; in a way, the latter has it pretty easy. Compare him and the film to the likes of Chuck Noland in Cast Away, Aron Ralston in 127 Hours, or the father and son in The Road. Those films capture the emotional and mental anguish of trying to survive, and unfortunately, The Martian falls short in that regard. If Scott’s intention was to make a feel-good movie that’s also a testament to human knowledge and spirit, perhaps the rollercoaster nature of survival got in the way of that vision. Nevertheless, to downplay it works against the film and cheapens Watney’s journey. 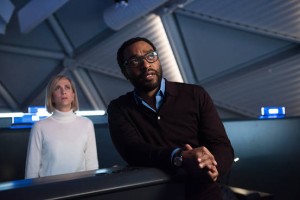 What stood out to me the most about this adaptation is how funny it tries to be. That shouldn’t be surprising, considering how Weir’s humor helps make his novel so entertaining, but the film augments it even further, with characters regularly dropping quips and engaging in verbal spars with one another. The humor doesn’t always work, as it does seem forced here and there, but the times when it does are brilliant, as evidenced in a scene where the film cleverly finds a way around the MPAA’s rule of using the word “fuck” only twice in a PG-13 flick. A film’s humor only works as well as its cast, and thankfully, a talented ensemble cast is well up to the task of injecting plenty of laughs here. 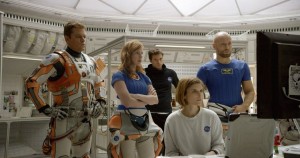 Thanks to a combination of Goddard’s writing and film editor Pietro Scalia’s smooth work, The Martian divides its attention evenly between Earth and Mars, and as a result, each cast member is able to leave an impression, with several performances standing out. Damon hits every emotional beat with poise, and his charisma and confidence allow him to effortlessly slip into the role of Watney and bring the character to life. Jessica Chastain combines assertion and motherly grace as Ares III commander Melissa Lewis, and she owns the frame every time the camera turns to her. As NASA director Teddy Sanders, Jeff Daniels shrewdly lets his body language and demeanor speak for his character. Chiwetel Ejiofor and Benedict Wong share an easygoing chemistry as NASA mission director Vincent Kapoor and JPL (Jet Propulsion Laboratory) director Bruce Ng respectively, and their interactions with other characters lead to some hilarious moments. 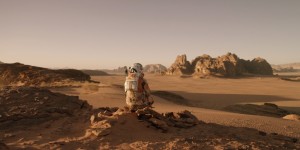 This is an entertaining flick from beginning to end, and it uses every ounce of filmmaking craft and technique to bring the audience into its world. Cinematographer Dariusz Wolski captures the vast landscape of Mars in some stunning images and steadily keeps the characters in frame, even during kinetic sequences. To see this in 3-D is a must – not only was the film filmed in that format, it also makes for an incredibly immersive experience. I found myself at comfort and ease in the sleek, white interiors of the artificial habitat, and my senses heightened whenever the planet’s orange-brown palette crept into the picture. Production designer Arthur Max’s practical sets and creations maintain their tangibility and merge seamlessly with any CG work. Harry Gregson-Williams’ understated score allows the characters’ emotions to come to the forefront, and the inclusion of ’70s music, particularly from the disco genre, is absolutely delightful and uproarious. 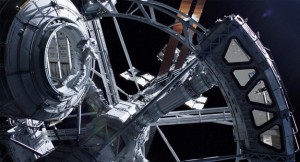 A engaging and lean film, the Martian certainly pales in comparison to the novel, but this adaptation retains enough of its source material’s foundation and wit to run well on its own. Perhaps my assessment is a bit harsh and nit-picky, but honestly, that’s just how I tend to approach film adaptations if I’m familiar with the original source (case in point: I stopped watching the Harry Potter movies after the third one fucked up the Firebolt design). A part of me wishes that I saw the film first and then read the novel, but regardless, reading the novel and then watching the film thankfully doesn’t take too much away from what the film accomplishes, and it can accomplish so much more if people demand more discoveries, explorations, and information about space.