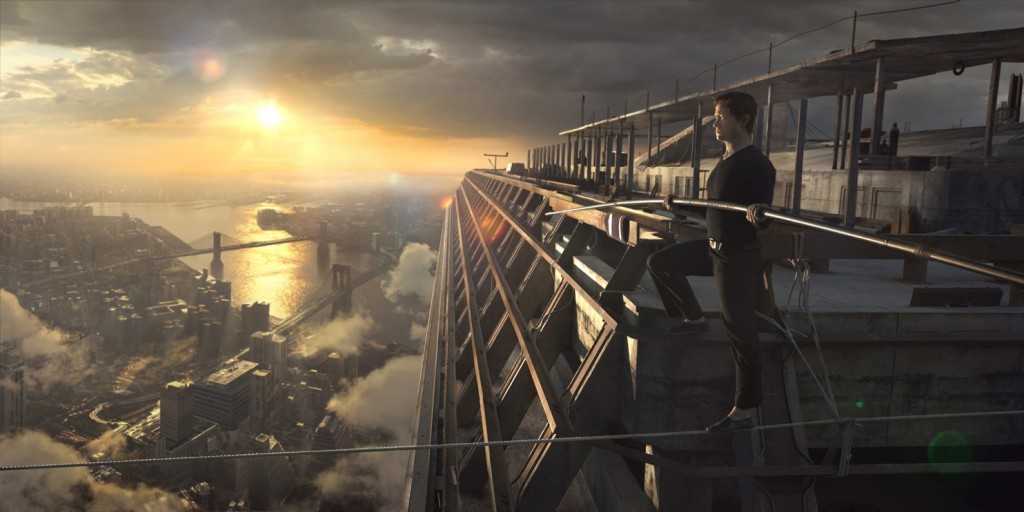 The best – and most iconic – photographs tell stories. They’re single frames, but they tell so much about their subjects and the emotions that ran during the moments that were captured. That’s why the photographs of French high-wire artist Philippe Petit walking between the Twin Towers of the World Trade Center in 1974 are so breathtaking, and you can’t be faulted for wondering why a non-documentary film about this pivotal event even needs to be made. Director and writer Robert Zemeckis (Forrest Gump, Cast Away) has a response to that sentiment with The Walk, which seeks to tell a story about the man on the wire and place the audience in his shoes. While it’s an unremarkable film for most of its running time, it does soar when it absolutely needs to. 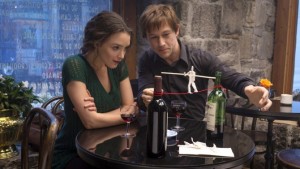 Philippe (Joseph Gordon-Levitt) is either a dreamer or a madman. Then again, perhaps he’s both. Having taught himself tightrope walking during his teens, he spends his time performing for citizens and tourists wherever he goes. Upon reading about the construction of the Twin Towers, he realizes that he has found the ultimate place to hang his wire. Assembling a group of unlikely recruits, he departs for New York and feverishly plans his walk, knowing that he faces insurmountable odds to execute his beautiful, insane vision. 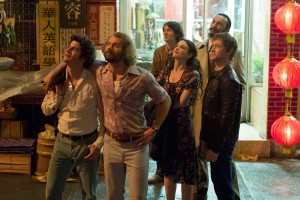 It’s quite obvious that Philippe’s eventual walk between the Twin Towers is the film’s highlight, so everything else coming before that moment is essentially filler material leading up to it. That said, it’s only once we pass the halfway mark does the picture get quite interesting, as the group’s intensive preparation is reminiscent of a heist flick, building up to the riveting act. Prior to that, Zemeckis – who co-wrote the film with Christopher Browne – sets out to show who Philippe is and how everything culminates in this one act, and really, it’s about as paint-by-numbers and uninspired as it can get. There isn’t anything compelling about it, and all the characters save for Philippe are paper-thin, so the film breezes by them. What doesn’t help matters is that the film stifles its narrative’s flow with narration by Philippe, as he constantly jumps in by recounting how he was feeling at various points in the story, as if we didn’t know. It’s not just offscreen narration, either; the film keeps coming back to an entirely separate sequence in which Philippe stands on the Statue of Liberty – with the Twin Towers in the skyline – and breaks the fourth wall. In a sense, it seems as though Zemeckis and Browne couldn’t find anything interesting about Philippe to show apart from the walk itself. 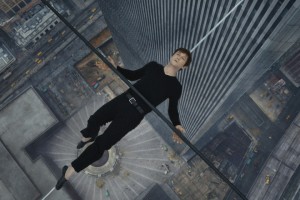 When the time comes for the walk to occur, the film kicks into high gear. It’s the moment that the filmmakers have been waiting to show, and they pour all their skills into this stunning sequence. Cinematographer Dariusz Wolski captures this act from various camera angles and also brings us up close and personal to Philippe, leading to a heightened sensation of awe and danger. The film takes full advantage of its 3-D format, emphasizing the depth of the void between the Twin Towers in addition to the height from the wire to the ground, and it’s even better to watch this in IMAX. Sound plays an integral role here too, as the wire’s groans and the wind’s whistles increase suspense all the more. However, Gordon-Levitt’s performance, exuding elegance and making great use of his charisma to cut through the tension, is what glues all these elements together. He effortlessly brings forth Philippe’s passion and respect for these skyscrapers, and from that, the picture becomes a loving tribute to the Twin Towers. 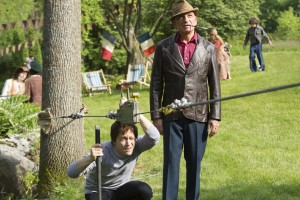 Does The Walk justify its existence? Just about. Philippe’s death-defying walk clearly inspired Zemeckis to bring that moment to life, and sure enough, the film depicts it with utmost exhilaration and reverence. Still, in a good story, the journey matters as much, if not more than, the outcome itself, and that’s where the film does fall rather flat due to some stilted storytelling. At least its spark of life came later instead of earlier; that’s what saves the film.