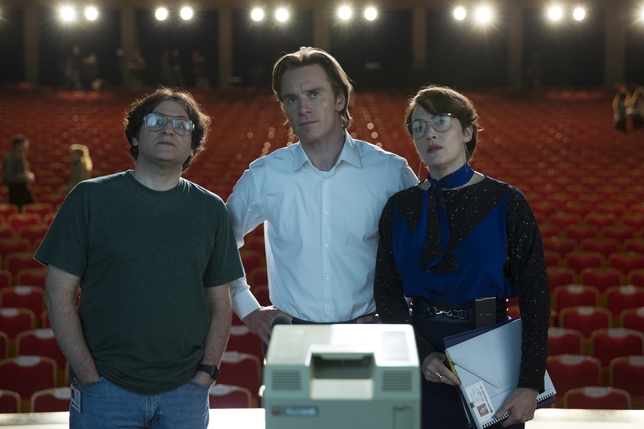 When it comes to biopics, adherence to the truth shouldn’t matter the most. After all, does anyone truly expect a film to reflect reality? Kudos to a biopic if it is factually accurate, but really, that accuracy should be in service to its story. I don’t know much about Steve Jobs, the late CEO of Apple Inc., nor have I read Walter Isaacson’s authorized biography book of him (also titled Steve Jobs), so I can’t comment on how accurate the Aaron Sorkin-scripted, Danny Boyle-directed film adaptation is in its portrayal of the businessman and the events in his life. What I can comment on is the film’s quality, and I can say that it is a delightful biopic – a carefully crafted and sleek picture, with an absorbing story at its core. 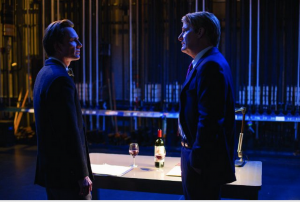 Divided into three segments, the film follows Jobs (Michael Fassbender) backstage at three product launches: the Mac in 1984, the NEXT cube computer in 1988, and the iMac in 1998. Less than an hour before each presentation, Steve meets and interacts with a host of individuals, most of whom appear in all three. There’s Joanna Hoffman (Kate Winslet), head of marketing; Steve Wozniak (Seth Rogan), Apple co-founder.; John Sculley (Jeff Daniels), Apple CEO; Andy Hertzfeld (Michael Stuhlbarg), software architect; Chrisann Brennan (Katherine Waterston), Steve’s former girlfriend; and Lisa Brennan (Makenzie Moss, Ripley Sobo, and Perla Haney), the daughter of Chrisann and Jobs. As Jobs goes about dealing with each person, the film paints an intimate profile of a blunt, brilliant egomaniac and visionary. 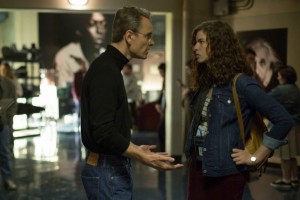 The film is very much a showcase for Sorkin’s screenplay. Known for writing The Social Network and recently-ended TV series The Newsroom, he adapts Isaacson’s book into the form of what is essentially a three-act play, and it’s quite easy to imagine this unfolding on stage due to its intentionally limited setting. Dialogue is king when it comes to Sorkin’s work, and it’s as snappy and witty here as you can imagine. Characters trade verbal jabs at one another with great relish, and watching such scenes is akin to watching a collection of first-rate boxing matches. The story does feel cyclical, as characters like Jobs, Hoffman, Wozniak, and Chrisann seem to reset at the start of a segment and end up doing and saying the same things they previously did, but the nature of this storytelling choice is meant to serve a single dramatic narrative, which is about Jobs being forced to look at himself, his actions, and his attitudes by the people surrounding him. Sorkin plants dramatic notes at the right places and times in this narrative, and they lead to some poignant and powerful scenes. 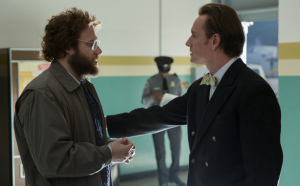 In a story where characters are fleshed out not so much by action as they are by dialogue, a highly intelligent cast is required to bring said story to life, and Steve Jobs has just that very cast. Fassbender brings forth an incredibly nuanced performance, exposing the many facets to the titular character; he’s savage as an asshole, passionate as a visionary, and affecting as a human. Daniels and Winslet spar with Fassbender handily, but it’s during their most explosive moments that their authority comes through cleanly. Rogan and Stuhlbarg turn in perhaps their best performances to date, with both of them playing awkward characters who bear some of the film’s best emotional punches, and they deliver those punches with great confidence and determination. Most surprising here are Moss, Sobo, and Haney, as all three of them hold their own against the likes of Fassbender and nail their key scenes. 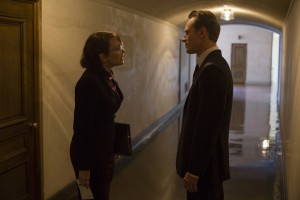 Given that Sorkin’s screenplay is the real star of the film, every aspect of filmmaking craft is meant to help it breathe. Boyle’s decision to film each segment in a distinct format – 16mm for 1984, 35mm for 1988, and digital for 1998 – takes what could have been a stage play and turns it into a visual experience that mirrors Jobs’ rise over the years. The director is known for his kinetic style of filmmaking, and that holds true with the fine work of editor Elliot Graham, whose cuts mirror the snappiness of Sorkin’s dialogue and keeps the film moving along quite smoothly. Daniel Pemberton’s score lines up seamlessly with the characters’ emotions, resulting in a bubbling and effective series of crescendos and diminuendos. 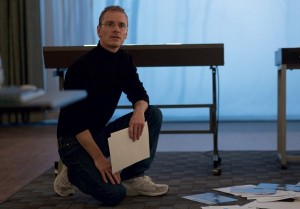 Steve Jobs is a prime example of fine screenwriting and what can result when it drives the picture. Characters have purpose, and the astute cast prove to be very potent with the material they have. Dialogue and storytelling wrap around a compelling narrative, as do filmmaking techniques. Does all this come at the cost of factual accuracy? Perhaps it does. However, does all this result in an impressive film, worth its weight in entertainment? Of course. This may just be one of the better biopics in recent memory.