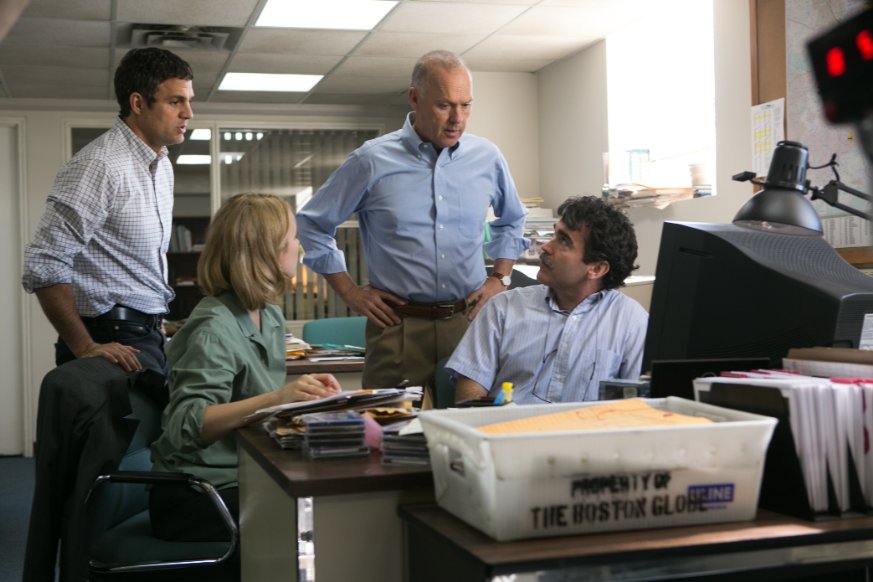 What makes Spotlight such an accomplished and incredible project? It’s one of those pictures where every single one of its parts come together seamlessly, never calling attention to themselves and working only for the purpose of making a tremendous film. It knows what kind of movie it wants to be, and sets out with that objective in its sights without ever straying from its intended path. It is, without a doubt, one of the best films of the year. 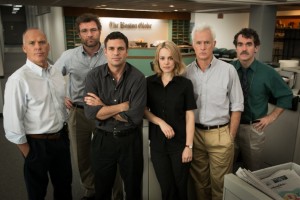 At The Boston Globe, Walter “Robby” Robinson (Michael Keaton) leads the publication’s Spotlight team, which conducts long-term investigative reporting. Recently appointed editor Martin “Marty” Baron (Liev Schreiber) suggests that the unit look further into a column regarding a priest who allegedly molested several children over a long period of time. Though wary about essentially taking on the Catholic Church, Robby accepts, and the team – consisting of reporters Michael “Mike” Rezendes (Mark Ruffalo), Sacha Pfeiffer (Rachel McAdams), and Matt Carroll (Brian d’Arcy James) – begin the process of finding victims and evidence. As the journalists dig deeper and deeper, they find that there is much more to this story than they ever would have imagined. 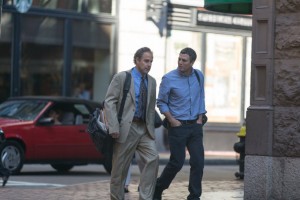 Covering the Globe‘s role in what would eventually lead to the sexual abuse scandal in the Boston archdiocese, the film handily conveys and emphasizes the weight of the team’s task and work. The Catholic church typifies the sheer obstacles that the Spotlight team face, and writer and director Tom McCarthy continually shows that, from Marty’s meeting with Cardinal Bernard Law (Len Cariou) being one of the former’s first upon arriving in Boston to the sheer number of churches scattered throughout Boston. Throw in the fact that Boston Catholics feel like a community in and of themselves, and it becomes abundantly clear that the church has a deep and far reach here. Also a consistent hurdle is the publication itself, as the team fights back impending deadlines and impulses to print what they have already. That being said, this investigation is an obviously long procedure, and the film places us on the frontlines with the team as they go about the entire city interviewing victims, searching for leads in records books, and grilling attorneys – all of which is done multiple times. Is it menial and repetitive? Yes, but that’s the point, and it also feels realistic. 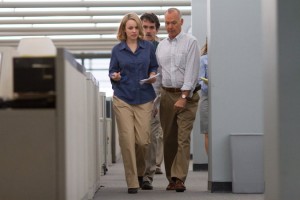 There’s no doubt that the investigation was both an emotionally draining and cathartic experience, but the film never gets overly sentimental when portraying it. Instead, it depicts the events here with cold clarity while still leaving some room for us to have empathy for the characters, specifically the victims, whose testimonies are surprisingly succinct. As for the reporters, each of them has a distinct personality and respond to their work in different ways since all come from a Catholic background, but McCarthy and co-writer Josh Singer do not delve deeply into the team’s personal lives. As far as the filmmakers are concerned, the journalists are here to just do their jobs, so there is no need to inject drama into their lives since that would distract us from the work they do as well as the victims, which is what the film is about. McCarthy and Singer are also careful not to lionize them, and they accomplish this by hanging a sense of complicity over the team’s heads, as their publication in the past received information that could have implicated several priests, but chose not to proceed with a story. This makes the Globe somewhat responsible for keeping the victims silent and goes to show that the press isn’t always guaranteed to give a voice to the minority, the oppressed, and the silenced. 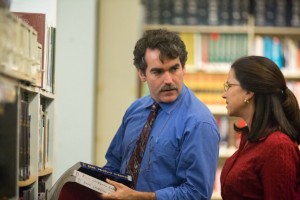 You’d think that a film would have trouble maintaining all the information that the reporters get their hands on, but Spotlight is well up to the task. McCarthy and Singer skillfully condense the team’s work into a runtime of just over two hours, hitting the breakthroughs and halts without missing a beat. It’s easy to forget a name here and there, but the film does bring most of its minor characters back into the fray and remind us of their roles in this story. This is a breezy screenplay that never fails to communicate the magnitude of the reporters’ objective, and complementing it is the stellar work of film editor Tom McArdle, who keeps the story moving, ensures that there isn’t a boring moment, and juggles the perspectives of all the reporters with ease. 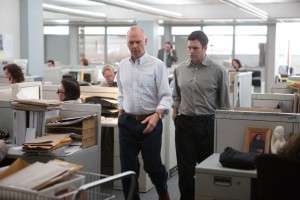 At work here is a stellar cast; they may not turn heads, but they do fulfill their parts to perfection. Keaton’s easygoing nature works to his advantage, as Robby often interacts with some of the city’s higher-ups who trust him. When Robby gets them right where he wants, Keaton brandishes a directness that turns him into a force to be reckoned with. Given that Mike is the most (expressively) passionate of the bunch, he is the audience surrogate, and Ruffalo – who has a knack for playing empathetic characters – shines in the role, often letting his emotions dictate his actions. McAdams has an earnestness about her, and it is that quality at the heart of Sacha’s engrossing and heartbreaking conversations with victims. Also impressive is Schreiber, who highlights Marty being very much a fish out of water in Boston to often humorous results. Rounding him out is his mild-mannered authority, which is what makes him such a compelling character. Like the film’s soft and understated piano score, the entire cast is rather subdued, but all of them are very much believable as their characters. 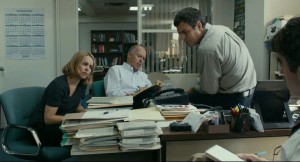 A absolute must-watch, Spotlight hardly misses a step. With an excellent cast by his side, McCarthy has turned a riveting and sprawling true story into a well-paced drama that, while stripped of embellishment and romanticism, retains the weight of the journalists’ work and – more importantly – is very respectful towards the victims of this tragedy.