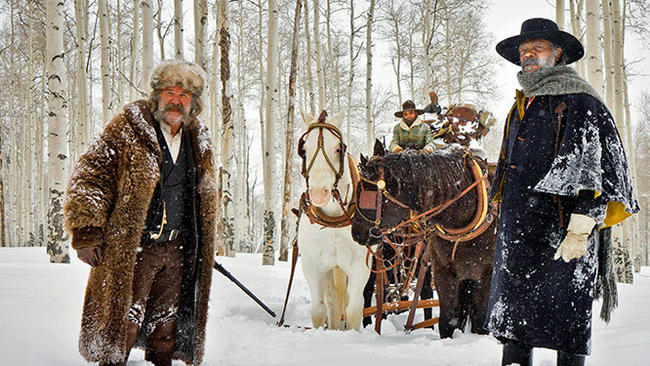 One of the opening shots of The Hateful Eight proves to be quite telling – an extreme close-up on Jesus Christ’s forlorn face, before the camera slowly pulls back to reveal a wooden crucifix alone in a snowy wasteland, with not even a visible rock to keep it company. Here, Christ’s sacrifice to remove the sins of mankind has compelled humanity to commit more evil than ever before, abounding in even greater sin. His work ultimately amounting to nothing, he is forgotten. The world he tried to save instead has hatred running amok, and mercy is nonexistent. With that shot, writer-director Quentin Tarantino draws us into the world of his latest feature film, a mean-spirited and surprisingly political piece that’s surely his most divisive film yet. 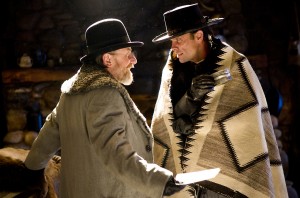 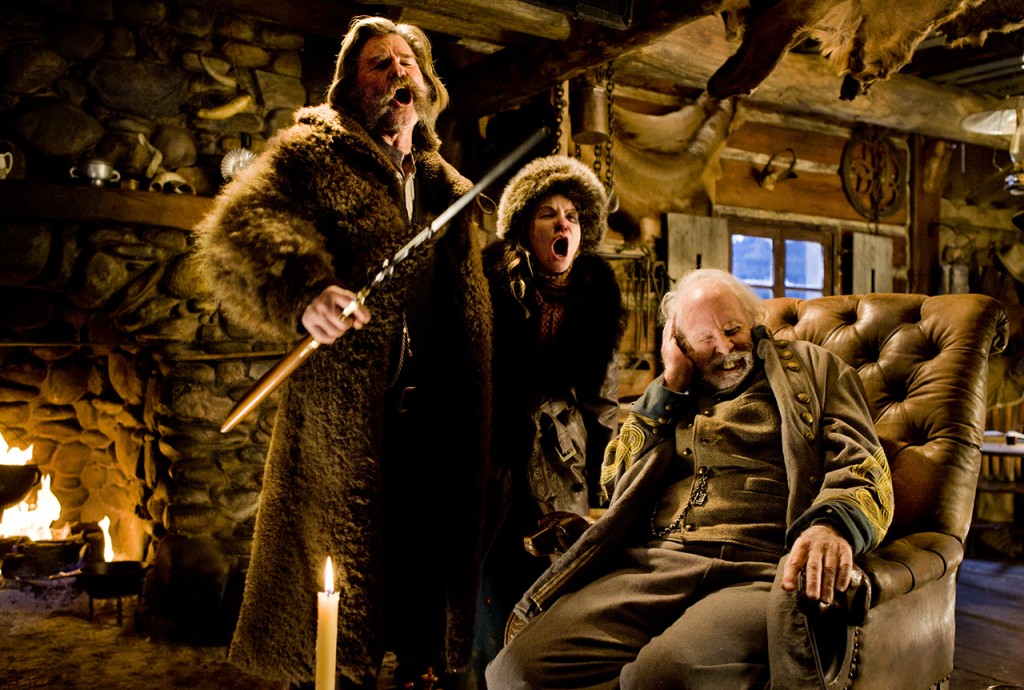 Say what you want about Tarantino, but the man is unparalleled when it comes to delivering a unique cinematic experience, and we get just that with The Hateful Eight. Audiences can watch the film in two versions: the 70mm Roadshow and the wide release. I highly recommend the former since it’s the version that Tarantino – being the film buff he is – wants his audience to watch, and what’s more, you’d be experiencing a practice that hasn’t been seen since the ’70s. With this version, there’s a three-minute overture before the start of the film, a 12-minute intermission around the halfway point, additional scenes, and you get a special program. The intermission plays a significant role here in that it helps distinguish the first half, a pressure cooker building tension, from the second half, a mystery-driven explosion of ridiculous carnage. To categorize the film into a single genre is near-impossible because of this; it feels like a suspenseful, post-apocalyptic Western at first before transforming into an amalgam of an Agatha Christie novel and John Carpenter’s The Thing. You may scratch your head, but that’s what you get from Tarantino, whose usual trademarks – long stretches of emotionally charged dialogue, dark humor, and over-the-top violence – glue everything together into a truly entertaining film that is distinctly his. 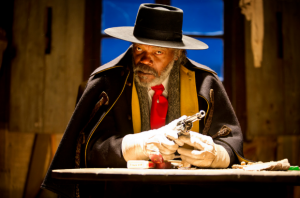 Tackling a host of very relevant ideas, The Hateful Eight is not only a different beast altogether when compared to the rest of Tarantino’s filmography, but also his most political project yet. Though the story takes place in the aftermath of the Civil War, its portrayal of racism hits a contemporary nerve, clearly implying that the war, Reconstruction, and the Civil Rights Movement didn’t do squat in quelling the issue. Racism takes many forms here, from the heated use of the N-word by Domergue, Mannix, and Smithers to the casual form assumed by Ruth. Mannix in particular calls to mind the police officers implicated in the notable deaths of blacks over the past few years, and the characters also discuss what they think must happen for whites to be safe, as well as what blacks must do in order to survive. Throw in a light touch of gun control, and Tarantino seems to suggest that the world of his film isn’t very different from ours. This makes for engrossing subject matter in the characters’ confrontations, but most of it is contained in the film’s first half, with the second half offering only a solution to the issue of racism towards the very end. It’s a tad bit unfortunate since there’s plenty of room for Tarantino to build upon this theme, but he appears to be overconfident in his storytelling this time around. To see him have a crack at such a compelling matter is exhilarating, but I can’t shake off the feeling that he only sticks a toe into this hotbed instead of plunging right in. 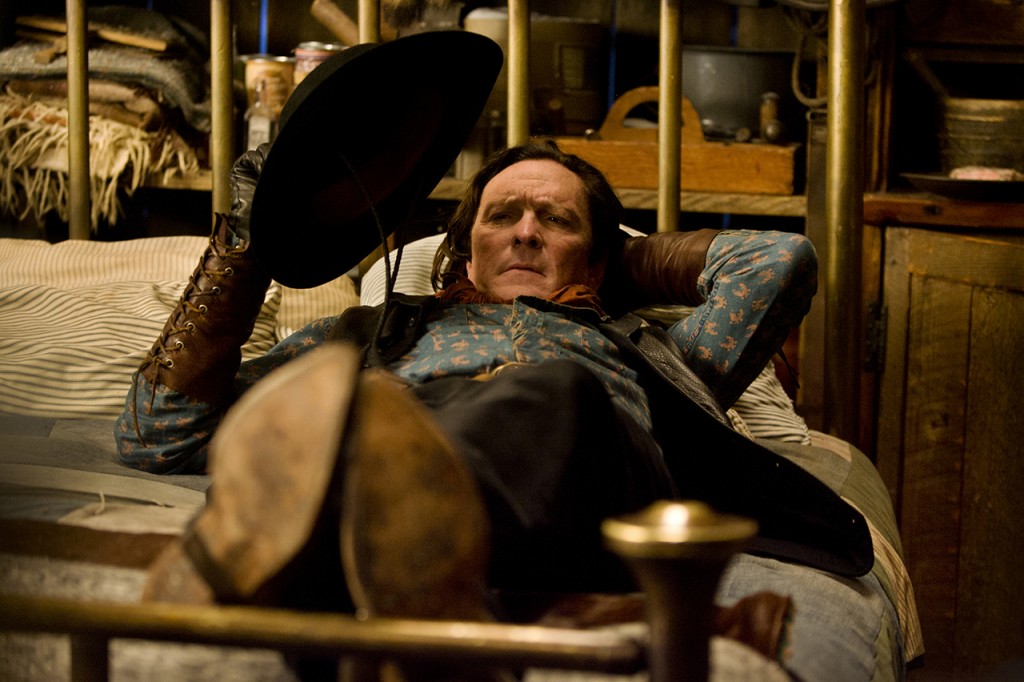 Tarantino has a knack for writing memorable, rounded characters, and they live up to the adjective in the film’s title. With the exception of O.B. and several other minor characters, the eight individuals in Minnie’s Haberdashery are despicable in their own ways. Tarantino designs these characters such that our allegiance shifts from one to another, and he pulls the rug out from under our feet in clever ways. Ruth and Warren seem like decent men at first, but we then come to find how they are really no better than those they intensely hate, with the former beating Domergue at any sign of resistance and the latter rolling out an uproarious and fucked monologue right before the intermission that’s so unpredictable. Now, only four of the eight – Domergue, Mannix, Ruth, and Warren – are richly developed since they’re in the film the longest. Smithers may seem like nothing more than a minor character at first, but Tarantino ekes out some empathy from us towards him when the reason why he’s at the lodge is revealed. While Bob, Gage, and Mobray each have their moments, the story doesn’t delve into them until midway into the second half, when we find out what makes them as hateful as their fellow lodgers – which, to me, comes too late for my liking. 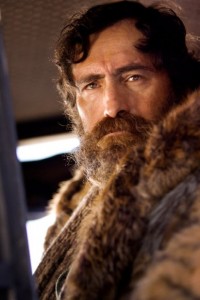 Breathing life into these characters is a marvelous ensemble cast, perhaps the best of the year. Diving into the material with great gusto, each actor is also careful not to overshadow anyone else, instead coaxing the best possible performance out of the others. Jackson is a very authoritative actor, and he uses that quality to great effect here, delivering his lines with precise comedic timing and effortlessly assuming the Hercule Poirot – Christie’s famous Belgian detective – role in the film’s second half. Sporting some gradiloquent whiskers, Russell nails Ruth’s domineering personality and swagger. Leigh is a real standout here; it would have been too easy to have sympathy for Domergue given the amount of beatings she endures, but Leigh conveys a bubbling, hidden evil through her sneers and cackling laughter that makes us hesitate. Also fantastic is Goggins, whose Southern drawl and trigger-happy temperament results in many of the film’s hilarious moments. Bichir is a man of few words, but his mutters naturally echo Bob’s irritable demeanor. Dern turns in a surprisingly physical performance, where the smallest expressions say everything about his character’s emotions and thoughts. While Roth is delightful as the foppish Mobray and Madsen slips comfortably into the laid-back and rough-sounding Gage, they don’t make as much of an impression as their co-stars. As for Parks, he proves to be quite pleasant as the mild-mannered O.B., who may just be the only character you’ll end up liking at the end. 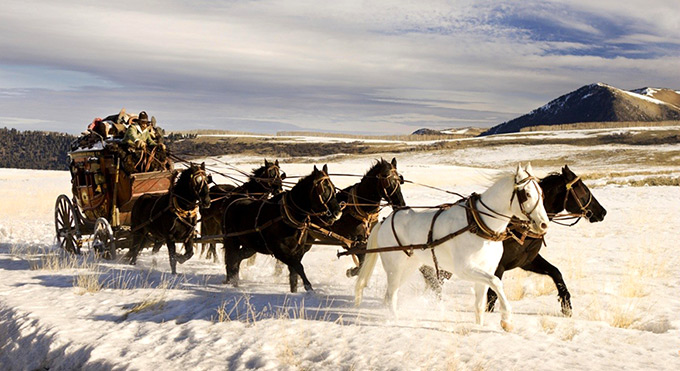 With the film mostly taking place in a single room, an immensely talented visual crew make that space as intimate as possible. Much has been made about The Hateful Eight being filmed in 70mm and the Ultra Panavision 70 lenses (the last film done this way was 1968’s Khartoum), and rightly so. I imagine a lot of moviegoers will say that the film doesn’t take advantage of this format in that it doesn’t feature enough landscapes (which, by the way, are stunning) nor scenes that are epic in scale, but that’s not why Tarantino and cinematographer Robert Richardson chose to film in that format and with these lenses. What matters here and what justifies their use is their framing. A shot with two talking heads enhances the conversation by capturing the emotions on their faces and their reactions to certain lines. When the entire torso of an individual is in frame, look to the other characters – while the focus may be on just one person, there are still others in action, and the filmmakers want the audience to take note of everyone in the frame at any given moment, allowing us to share the feelings of claustrophobia and paranoia that the characters are experiencing. Coupled with production designer Yohei Taneda’s work, in which we feel every nook and cranny of Minnie’s Haberdashery, the decision to film The Hateful Eight in 70mm makes for an incredibly immersive experience. 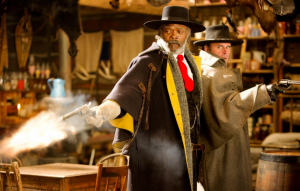 Audio too has a meaningful function in this experience, and it pairs wonderfully with what unfolds onscreen. Composer Ennio Morricone, best known for scoring Sergio Leone’s Spaghetti Westerns, returns to the Old West again for the first time since 1981. That said, it seems odd at first that he has turned in a score best fit for a horror film, but it turns out to be absolutely perfect. From the first drumbeat that accompanies the opening credits, the music instills a feeling of dread, which continually builds as the picture moves along, before a screeching of strings accompanies some very bloody deaths. Morricone’s work here is simply evocative, augmenting every scene and cuing us into the emotion we ought to feel, and it’s currently my favorite score of 2015. Also on the mark are the clear sounds of gunshots, the howls from the blizzard, and the splatter of brains and blood onto the wooden floor, as they snap us in and out of the film’s world. 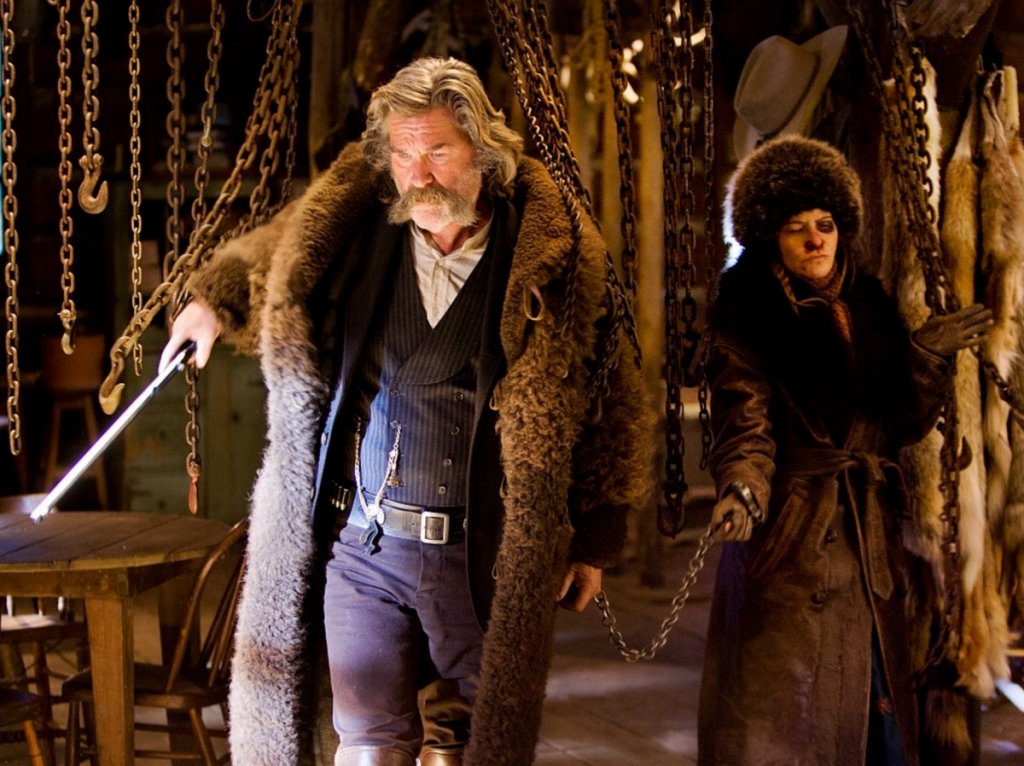 If you ask me, The Hateful Eight comes close to being Tarantino’s masterpiece, his magnum opus. All the right elements are here, from the once-in-a-lifetime theatrical experience and hot-button subject matter to the killer ensemble cast and Morricone’s vivid original score, all wrapped together in Tarantino’s signature filmmaking style. What keeps the film from grasping its reach is his storytelling, which isn’t as tight as it could be when it comes to certain characters and doesn’t fully commit to taking on the theme of racism even though it has all the confidence to do so. Nevertheless, the world that he has crafted is unlike anything you’ll ever experience. Its running time will exhaust you, its language and violence will abhor you, its subject matter will make you laugh (sometimes uncomfortably), and its ever-present cruel spirit will make you question why you’re even watching this film, but damn, is it a hell of a ride. If that’s not your cup of tea, then you can go hang out with that crucifix in the beginning – Lord knows it needs company.