As far as the Disney Revival era goes, Zootopia may just be its best film yet. 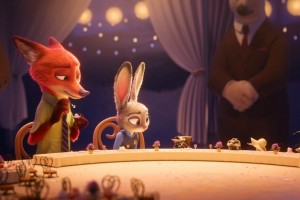 Simply put, this is a fun ride. While the film moves forward with a mystery/noir plot, it truly builds from the chemistry between Judy Hopps (Ginnifer Goodwin) and Nicholas Wilde (Jason Bateman), two characters who lie on opposite sides of the spectrum in many ways. To see their personalities clash and come to grips with each other provides the film with its heartbeats and much of its humor. Many kudos go to the superb voice acting from Bateman and Goodwin, who nail their characters’ nonchalant and energized natures respectively. The film does rush into and through its third act, which is a slight disappointment since it doesn’t feel organic. In addition, I think it’s time that the studio stops pulling major character twists like they did in Wreck-It Ralph, Frozen, and Big Hero 6. By now, I’m expecting one to occur in each of their films, and this was no different. 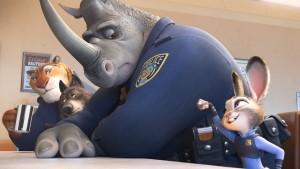 What also makes the film so engaging is its exploration of prejudice. Since the studio entered into the Disney Revival era, most of its films (at least, the ones I’ve seen) admirably delve into ideas that some may consider mature, whether it be self-acceptance in Wreck-It Ralph or grief in Big Hero 6, and I believe it is precisely that thematic content which define this era’s films. Zootopia continues this trend, as it touches upon prejudice’s many forms, including racism, sexism, and stereotyping. Certain characters may think they abide by the “Don’t judge a book by its cover” philosophy, but as the story progresses, the film reveals just how they too engage in the behavior that they claim to stand against. I have some friends who say the film’s messages are heavy-handed, but I don’t think so. It is a children’s movie (said friends are all adults), and given the current political and social climate, these themes absolutely need to be ever-clear for that particular audience.

It goes without saying that this is an absolutely gorgeous film. Bursting with color and vibrant throughout, the animation proves to be downright breathtaking when it shows off the film’s scale. Look no further than Judy’s arrival at Zootopia, as you get a sense of a bustling, diverse metropolis that’s illustrated in such wonderful detail. Districts make up the city of Zootopia, and each of the ones visited in the story has its own design and conveys its own mood. When it comes to the animals themselves, it’s hard not to notice how beautifully rendered they are, from their fur to their smooth movements.

All in all, the studio knocks it out of the park with Zootopia. There’s so much to marvel at visually, and the film boasts characters and content that any audience member will easily connect to and understand. If you ask me, this is likely the one film from the Disney Revival Era that I’ll revisit and enjoy the most.