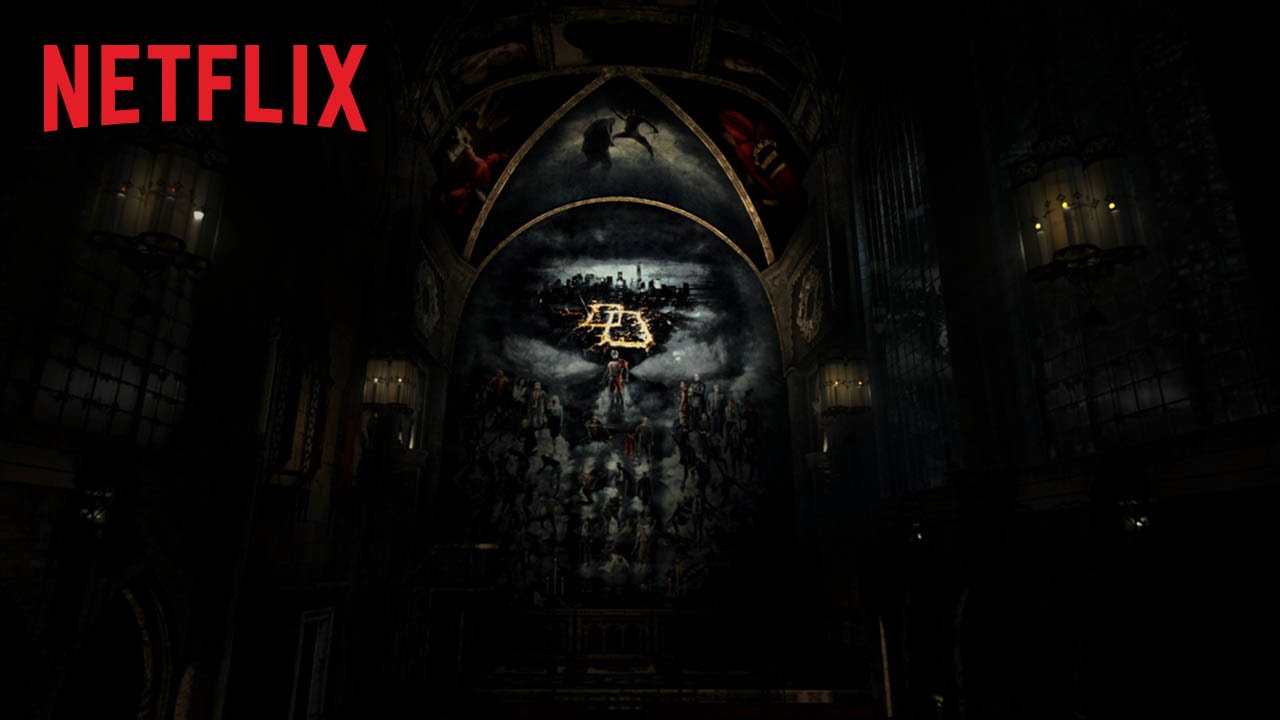 I just wrapped up Season Two of Daredevil and this quote, taken in one of the last few episodes of the season, really sums up my feelings for this season. We pick up after Wilson Fisk (Kingpin) has been thrown in jail and Daredevil is continuing his lawyer-by-day/vigilante-by-night lifestyle. Unlike Season One, the action gets started pretty quickly and we are introduced to a new vigilante on the block, The Punisher. Unlike Murdock, he has no qualms taking the lives of the evildoer. The first episode ends with a dramatic and intense Punisher vs. Daredevil battle. The final scene is The Punisher shooting Matt in the head. 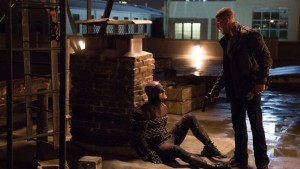 This first episode sets the tone for the entire season. The root of all conflict for Murdock is his inability to accept killing as an option for the criminals he fights. For him, everyone deserves a shot at changing themselves. In addition to the push back he receives from The Punisher, Elektra joins the cast of characters as a former flame and current assassin with similar bloodlust issues. Matt is stretched to his limit as he juggles fighting a secret Japanese organization taking over his city (that creates personal complications with Elektra), fighting The Punisher aka Frank Castle, going to trial representing Castle, and managing his budding romance with Karen Page. If it seems like there’s a lot to take in – it’s because there is. However, I feel like the writers did a respectable job introducing new and compelling characters while also leveraging the continued quality performances from Season One standouts. In particular, the cameo from Vincent D’Onofrio as Kingpin, was an intense reminder of the types of enemies Murdock has accrued along the way as Daredevil. To get a more in depth synopsis of the season, I highly recommend visiting this link for an in-depth full season recap.

So how did I feel about Season Two? I prefer it to Season One. The first Season was probably a more well-executed standalone story. But the scenes were too dark (did DC get called as a consult?) and the story moved very slowly until the introduction of Kingpin. I think Season Two is able to leverage the familiarity the audience has with older characters while also creating new storylines for both the current season and the grander Daredevil universe. But what I enjoyed the most was Matt Murdock’s struggle to impose his will – both as Murdock and Daredevil. 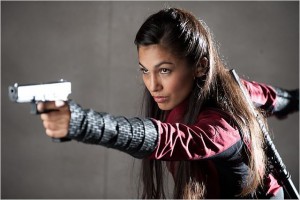 Throughout the season, you could see Murdock throwing himself forward, finding new reserves, in an attempt to maintain his sense of justice in Hell’s Kitchen. He is not only driven to protect everyone, but to also protect the souls of the other anti-heroes that, in his belief, need to understand his point of view and not go around killing the bad guys. The Punisher is ruthless and believes that Daredevil is a half measure. Jon Bernthal does an excellent job of building up sympathy through vulnerability, only to quickly take it away with a scene of brutality. As violent as Daredevil can be, he comes off as a choir boy next to Bernthal’s Punisher. Elektra lives less within the realm of “good vs. evil” and just sees things as “for her” or “against her.” Additionally, the kill provides a rush of freedom for her character and is more of a natural way of life for those who live the sort of lifestyle she has come to embrace as her world. I appreciate the Elektra/Matt Murdock relationship because I feel like it provides Matt the opportunity to have more freedom as a character. Despite his initial disdain for her presence, there is an obvious chemistry between the two (more in general rapport than romantic at times) and it gives you a look at a potentially “more fun and free” Daredevil. His inability to share this world with Foggy and Karen forces an uncomfortable tension into the firm of Nelson and Murdock. 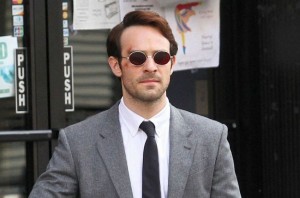 All this comes together in a not so tidy conclusion. Realistically, Murdock learns that he cannot control the actions of his vigilante brethren and learns to find ways to work with them in ways that allow each the characters to be the best versions of themselves. While this may lead to a bit of “sloppy” clean-up, it leaves the Daredevil world in hues of gray which is what I appreciate about the show and the character. By the end of the season, each of our (anti)heroes has evolved in some sense due to lessons learned from their exposure to other characters of the story. The only one who basically stays the same is Stick. Stick is still a grumpy asshole that will kick anyone’s ass if they step out of line. His crassness and don’t-give-a-shit attitude provide a nice contrast to characters who seem to have a lot of internal conflict about their actions and beliefs.

As Season Two came to a close, I find myself excited to see how the world of Daredevil would grow and evolve. You might hear people complain about a poorly executed story but I’m driven by the performances of the characters and the environments that are created for them. Daredevil Season Two makes me feel that Marvel and Netflix have big plans for Matthew Murdock and I am more excited about future seasons than I was about this one. 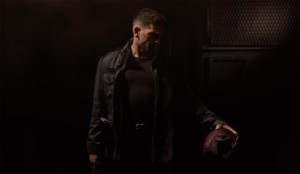 1 – The visuals. I felt that Season One was literally too dark and it’s nice to see that they’ve decided to allow us to see more details of the fight scenes and back alley hijinks.

2 – Distinct styles in choreography. Each fighting character has a look and feel to them that stands out in the way they carry themselves. Even the difference between Matthew Murdock and Stick standout as they use their canes to maneuver through their lives. Stick seems to thrust it forward with a brashness and disdain for the world while Matt is much more subdued. The best part comes from their fighting:

Daredevil – He fights with a lot of brutality while also showing restraint. The extra awareness he gets from his other senses come out in his fights and he tends to be the most connected to his surroundings.

The Punisher – Daredevil is certainly violent but the viciousness of Frank Castle cannot be matched. While Murdock tends to push the envelope in what he’s willing to do when fighting enemies, there’s a reckless, no holds-barred feeling that oozes from all scenes that involve the Punisher fighting. It’s intense and enthralling to behold.

Elektra – Unlike the other characters, Elektra comes off as more refined. Her movements seem to be less wasteful. However, she comes off as much more lethal and with a sense of coldness – killing seems almost impersonal.

Stick – Not a lot of wasted movement. Shifty and subtle. Suited for his age. Crafty and effective. 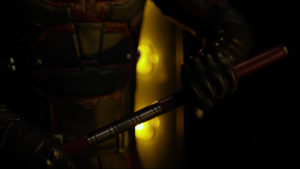 3 – Starting with Season One, Daredevil has made it a point to not play all of its cards when it comes to a character’s look. The evolution of the Daredevil costume is interesting and driven by utility. I enjoyed any scene with Melvin, Daredevil’s personal outfitter. Elektra and The Punisher both see their looks changed by the last few episodes and I hope this is a trend that continues in future seasons.

4 – Nelson and Murdock drama. At some point, this shit gets a little tired. I get it – Foggy doesn’t approve. At the same time, retreading the same issues episode after episode takes away from time I’d like to see with other character/story development. If their drama didn’t seem so tertiary I think I would be more bought in. But as of now, it’s a bit of an afterthought.

5 – Jon Bernthal. I mentioned this earlier but he did an excellent job as The Punisher. I enjoy the character more when he’s leaning more on the villain side of the spectrum. I don’t want to like him. Bernthal played that to perfection and gave us a Punisher that has a sympathetic story whose behavior leaves your feelings at odds juggling his experiences versus his actions. 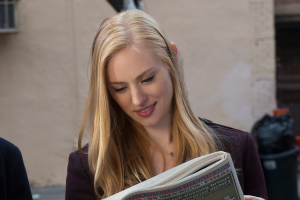 6 – Karen Page continues to grow on me as a character. She has a quiet strength that is highlighted as she interfaces with some really scary baddies. I find that many love interests tend to swing either very strong or damsel in distress and there’s a subtlety to her that makes her very likable.

7 – Crooked DAs and military personnel. I feel that it’s easy to plant corruption in these shows. However, I’d like to see something that doesn’t begin and end with some authority figure manipulating their power for evil. Let’s let the good guys be good guys for once.

8 – Marvel continuing to place other Easter Eggs in all their products. Whether it’s Hogarth from Jessica Jones or a biker gang from Agents of S.H.I.E.L.D., these subtle placements of characters and locations make the MCU more engaging and encourage you to connect more deeply with the world. I love it. 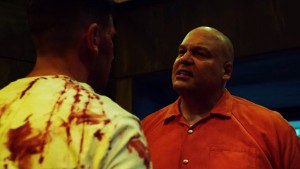 9 – The return of Fisk. Cold and calculating one moment, enraged and violent the next – Kingpin continues to be one of the greater Marvel villains and I’m looking forward to his revival in upcoming seasons. The scene in prison with Matthew Murdock was a standout.

10 – Murdock revealing his identity to Karen. I always find that the secret identity + love interest storyline places unnecessary tension on a show when extended for too long. I think the writers picked the right time for the reveal and making it the last scene of the season immediately sets you up for a dramatic return to Hell’s Kitchen for Season Three.