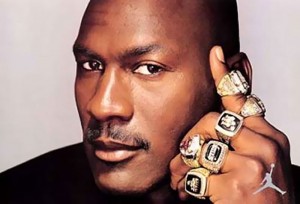 At 7:30 in the evening, two games started that would have historical implications on the league. And you can’t talk about NBA history without the GOAT (Greatest of All Time): Michael Jordan. Let me walk you through two stories that started twenty years ago and ended with the Warriors breaking the wins record and Kobe Bryant retiring from the game. 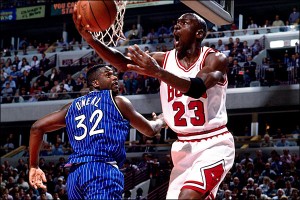 In the 1995-96 NBA season, Jordan and the Bulls tore through the league on the way to what was seemingly an unbreakable wins record, 72-10. Coming off a previous season’s playoff loss to the up and coming Orlando Magic, people were questioning MJ’s status as top dog in the game. A competitor like the game had never seen, the doubters drove Jordan to a new level of greatness. That kicked off a three-year run of dominance – but the consensus was that there would never be a season to match the Bulls’ 95-96 run. 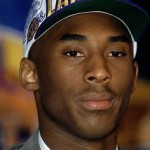 The next year a young high school prospect by the name of Kobe Bryant began his career as a Laker. Similar build, same position, and equally competitive – Kobe would be the closest thing to Jordan that the league had ever seen. For better or worse, he wanted to become the greatest by emulating the greatest. And while he never quite reached the heights that Jordan did, Kobe’s commitment to the game of basketball provided a 20-year run of excellence that had never been seen in a perimeter player. You may not like how he played, but no one can ever argue that he was constantly evolving as a player. 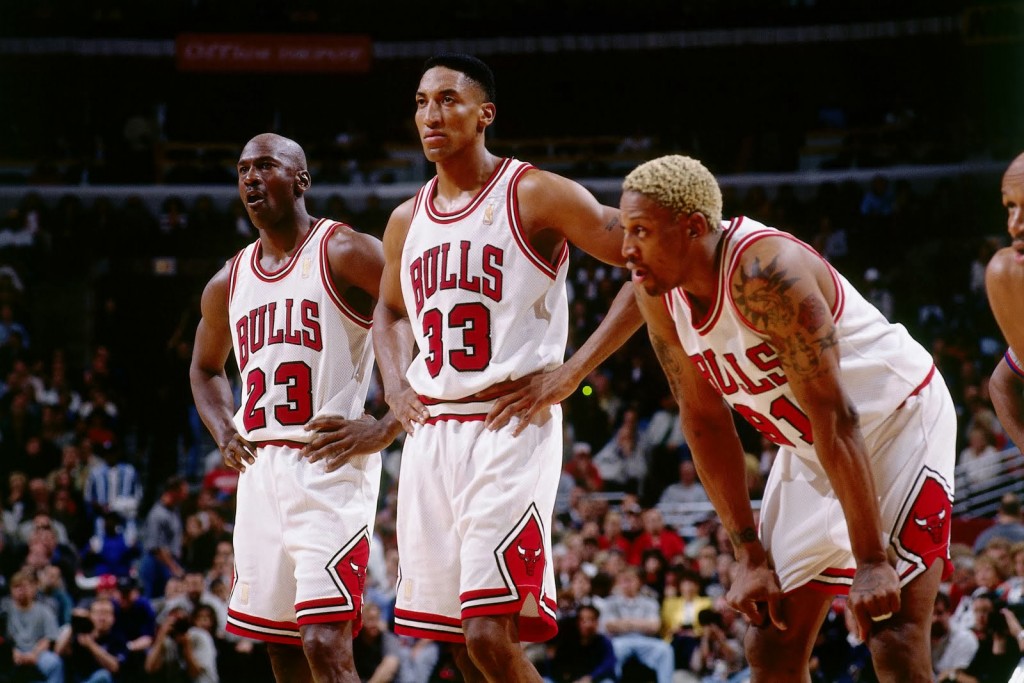 The 72-10 Bulls were the first glimpse of the future of the league. People forget that Jordan was once called soft – that he was athleticism and skill – you could beat him by being physical. Hell, they brought over Dennis Rodman to counteract this strategy. You could beat the Bulls because of the following truth: the NBA was ruled by bigs. Chicago broke that mold. Defensively, they used athleticism and an ability to switch and play smaller or bigger depending on the match up to give other teams fits. Offensively they worked the triangle offense – an unorthodox system that was built on high IQs and constant motion – let players make the reads and attack the defense when it was off balance. It was the perfect offense for an era that had not yet discovered how ruthlessly effective the three-point shot could be.

As Kobe’s career progressed, part of my personal issue with him was that visually, he was the closest thing to Jordan that we had ever seen. However, the results were not on par with MJ’s. Check out the video below – look at how closely Kobe’s moves follow those of Jordan’s.

But look at their career and peak season stats (From Backetball-Reference.com):

Keep in mind Jordan’s numbers go up significantly if you’re willing to throw out his time with the Wizards. So Kobe passed the eye test but the results were not as efficient. As a Jordan fan it drove me crazy that anyone would compare Kobe to the level of Jordan. The key difference for me being efficiency. Jordan was always known for being a tough shot maker but if you watch his game, he was great because he knew when to let the game come to him. Kobe was modeling Jordan, but he was also modeling the story of Jordan – you have to go out and get your own bucket. Kobe might be the best tough shot maker of all time but he also took more tough shots than anyone else. Additionally, off the court Jordan had a charisma that Kobe would never be able to mirror. While on the court both of them were students of the game – they both loved the game, they were both driven by a competitive drive that separated them from their peers and the public – off the court, Jordan did a good job making himself seem likable and accessible; Kobe did not. 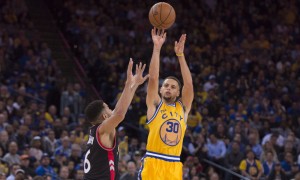 The Warriors are the next step of team evolution from that record-breaking Bulls team. With no handchecking, new illegal defense rules that allow for more mobile defenses, and the emergence of analytics, teams today have had to adjust their thinking on what is the most effective way to win. Ironically, a team that plays fast today like the Warriors, is actually slower-paced that many teams from the 80s and early 90s. But efficiency has soared and with the value of the 3-point shot being unearthed, it has led to a beautiful game of skilled passing and shooting. You watch the way the Warriors switch on defense and how quickly their defense turns to offense and you can see similar principles that drove the Bulls teams of the 90s. It helps that Steve Kerr is such an integral piece to both squads. But tell me, how dissimilar are these two line-ups:

There are no real “bigs” in either of those five-man squads. But the effectiveness stemmed from the skills and athleticism that each of those players brings to the table. If you can hold your own against the one or two big men the other team is playing, there’s no way they can keep up with you in transition and on offense. Both teams are considered more finesse – “softer” – than their rivals. They attack their opponents with speed and guile. I think people forget that about those Bulls teams. 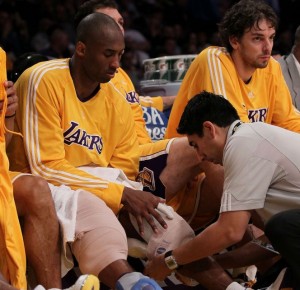 As much as I disliked young Kobe, I love old Kobe. It’s taken me years to figure out why and now I know: he’s the closest thing to Jordan that the league has today. I once hated that he was never quite at the level of Jordan. Today, I appreciate that he carries a style and personality that is phasing its way out of the league. People talk about killer instinct but there are really only two players that had it: Jordan and Kobe. There are other players that work hard – not like them. There are other players that want to win – not like them. There are other players that will impose their will on the game – not like them. Kobe’s pursuit of Jordan created its own beautiful story. He took that overwhelming competitive spirit and, as the game evolved into something different, continued to carry the torch of the guy who worked harder than everyone else. Who did things that were painful, not because it was fun, but because winning was everything. And unlike young Kobe, Old Kobe allowed his personality to come out. Jordan worked hard but was given talent and gifts Kobe never had. That’s how he was able to reach higher peaks. Kobe worked hard and because of his inhuman pursuit of basketball perfection and ability to play through pain. That’s how he survived for two decades in a league that had evolved around him.

While Jordan always talked about his love of the game, I think he was driven more by his love for winning. Today’s NBA does not have that same fire. The players grow up together today – it’s hard to stomp on the neck of an opponent when you were on the same team in high school. Rivalries are different. Different is not bad. The Warriors today excel because they play for the joy of the game. Their brand of basketball is beautiful because it is FUN. It’s good for the league if they want more fans. Purists will dissent but with something as subjective as basketball, the league is better off if the sport becomes more popular. The truth is in the cash. And this has been most watched era of the NBA since Jordan. 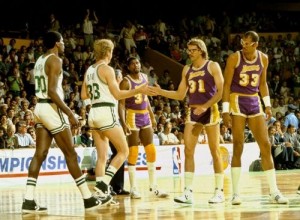 It was fitting that the Warriors beat the Grizzlies to break the Bulls record. The Grizzlies have long represented an “old school” way of playing – play physical, play big, get in the opponents heads. There are fewer and fewer teams who play that style in today’s league. The Bulls were the first team to show that you could reach the highest levels of play with athleticism and skill – without size and brutality. The 80s Lakers and Celtics were amazing teams that showed flashes of that. But hard fouls and pounding the ball inside were still the core elements of their ethos. Now twenty years later, the Warriors have shown that the concept of positionless basketball, while not the only way to win, is a key element to reaching the pinnacle of the game. With their exploitation of the three-point shot, they took it one step further than MJ and company did. But without that 72-10 Bulls team, this evolution does not happen.

It was also fitting that Kobe Bryant would play his final game the night the 72-10 record was toppled. Michael Jordan will always be a figure that hangs over the game. But with the last player who truly embodies that personality and style retiring the same night the Warriors achieved 73-9, I was emotionally moved. As the Bulls record was being tossed casually aside by the Warriors, the real beauty of the evening was happening in a game with no playoff implications.

I have watched the NBA all my life and I truly think it has changed for the better. But seeing Kobe retire was sad – he represents the last of  a type of player that, due to the ecosystem of today’s basketball, we may never see again. Today’s game is beautiful, today’s game is competitive – but the game will never have another player like Kobe Bryant. While on the court, Kobe could never best Jordan. In retirement, for one moment, he did something greater than Jordan ever did – he gave people an inside look at the precision and pain that is required to achieve that type of greatness. He allowed himself to be appreciated for his struggles. Jordan is loved for being the best. I will remember Kobe because he took the weight of Jordan and did not crumple. In his last year, he showed the NBA fans just how hard it is to be compared to MJ. Michael Jordan is my favorite player of all time. The Golden State Warriors are my favorite team. But Kobe Bryant was the key to the best evening of basketball I’ve had in my life. 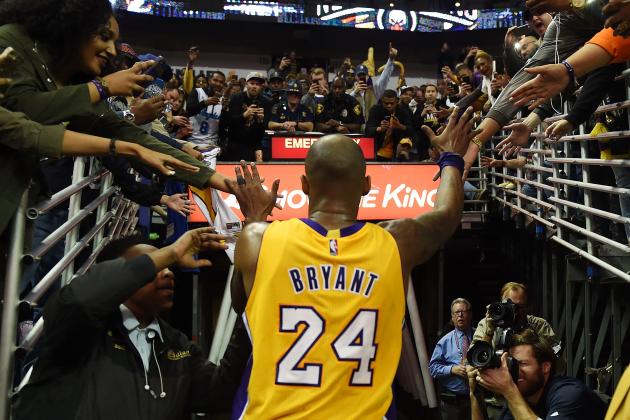