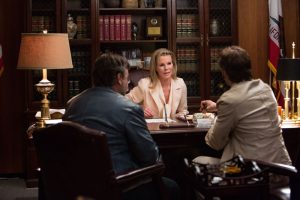 It’s 1977, and Los Angeles is losing its luster and romanticism, choked by plumes of smog. Nevertheless, it’s the world where enforcer-for-hire Jackson Healy (Russell Crowe) and private investigator Holland March (Ryan Gosling) carry out their morally objectionable work, with the former beating up people and the latter swindling money from his clients. A case involving a missing girl named Amelia Kutner (Margaret Qualley) brings these two together, though neither of them are particularly fond about the prospect of working together. With assistance from Holland’s clear-headed daughter Holly (Angourie Rice), the men search across the increasingly cynical city for clues and soon discover that Amelia’s whereabouts may be linked to a dead porn star, an environmentally conscious group, Detroit automakers, and the Department of Justice. As the scope of this odd conspiracy widens further and further, this dysfunctional trio realize that solving it may help each of them find purpose and redemption. 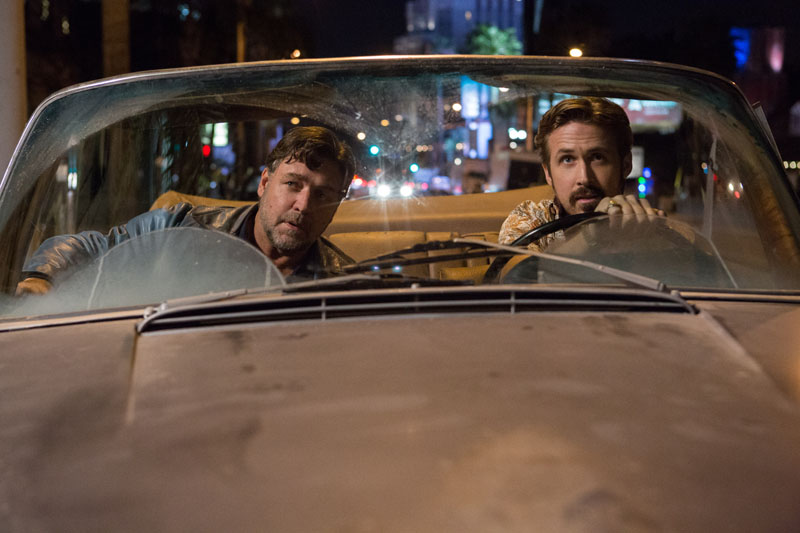 If you’re looking at plot alone, there really isn’t anything to be impressed by. It’s a familiar detective neo-noir buddy film, and the beats and tropes are easily recognizable. There are voiceovers by the lead characters, everything builds up to one big conspiracy, and a social commentary runs beneath it. Admittedly, the connective tissues that tie all these shenanigans together are rather thin, and it doesn’t quite make sense. To link one thing to another requires a bit of mental effort, which speaks to the convoluted and loose nature of the plot. In fact, the overarching narrative is more far-fetched and ridiculous than it is believable, so it’s almost difficult to believe that this plot should even work. 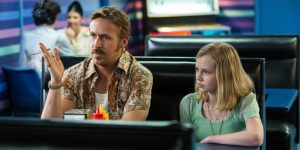 But work the plot does, because it isn’t what drives the film – the characters and their chemistry do. Black populates this morally ravaged world with utterly fascinating characters, each of whom get a sense to shine, from a porn star at a glamorous party to a random kid riding his bicycle out in the street. With the main characters, Black utilizes them intelligently, and it’s because of them that the plot works. The mystery ultimately doesn’t matter as much as they do because Black invests us in them. Wherever they go and whatever they encounter is part of their personal journeys, and it’s their growth that carries us throughout the course of the convoluted plot. Black bounces Holland and Jackson off one another to reveal their pasts and just who these characters are and why they act they way they do. He even finds a significant role for Holly to play, as she’s the smartest character here (echoing Nancy Drew) and serves as the story’s moral compass not just for these two misfit guys, but for their world. All of these interactions, both minor and major, power the story at hand. 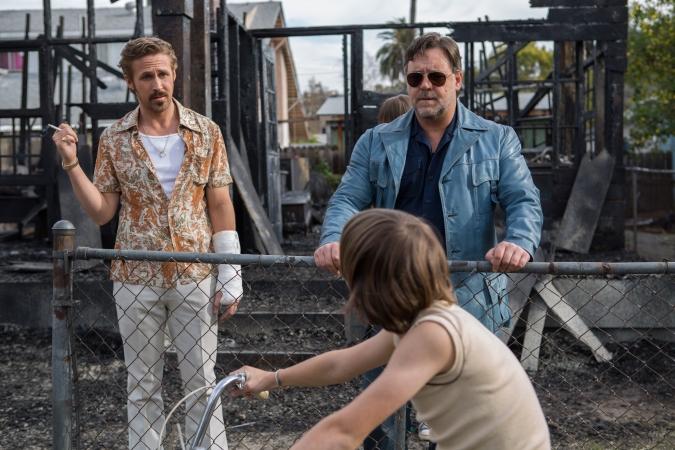 Black has a knack for comedy and witty dialogue, and they comes in spades. The film is full of wonderful zingers and hilarious conversations that come out of nowhere and strike quickly. I won’t spoil any of those here, but I’m willing to bet that you’ll have a hard time picking out a favorite moment simply because there are too many to choose from. Black sets up his humor expertly, too; the punch may come later, but when it comes, it makes the setup – already funny to begin with – stand out even more. It’s impressive how he gets so much mileage out of something that’s seemingly insignificant or one-off. There’s also plenty of slapstick humor, which plays out marvelously in spite of the nihilist tone that runs in the film’s world; who could have guessed that the breaking of arms or the splatter of bodies are capable of inducing such laughter? Believe me, this is one delightful romp. 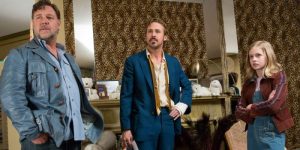 Of course, Black’s material is only going to be as good as the cast, and he has assembled the right actors and actresses for this film. Packing quite a paunch, Crowe effortlessly nails Jackson’s dry humor and weary disposition, and he shares such splendid chemistry with his fellow co-stars. Gosling is a comedic tour-de-force, bringing Holland’s bumbling personality and eccentricities to life while delivering a tremendous physical performance that’s better seen than described. Perhaps the biggest standout here is Rice, who’s more than comfortable playing off Crowe and Gosling. She’s hardly fazed when placed in adult scenarios, either – in fact, it’s her ability to be nonplussed without ever sacrificing her character’s teenage qualities that makes her performance so endearing. Also doing good work here are Qualley, Kim Basinger, and Matt Bomer, all of whom balance the comedy-heavy Crowe, Gosling, and Rice by highlighting the dramatic elements of the plot. 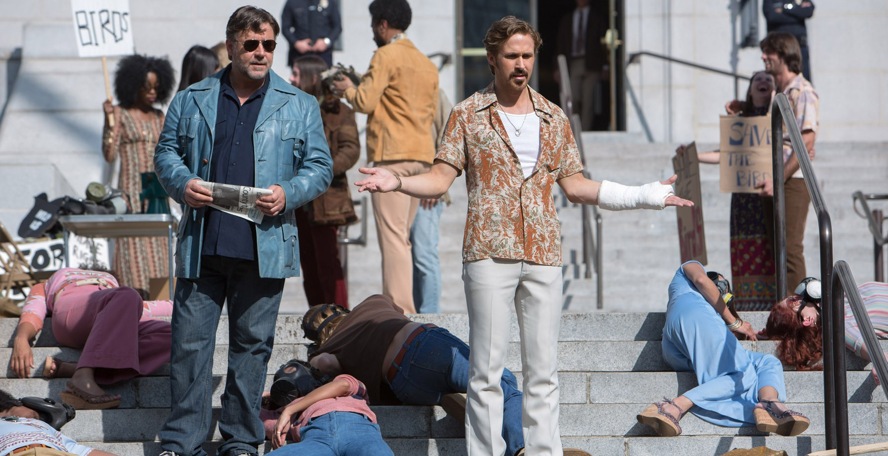 Some of it may be low-key, but the film’s craft is nothing to merely glance over. The recreation of ’70s Los Angeles is an extension of Black’s story; a battered, run-down Hollywood sign typifies the era’s moral decay, but the production and costume design burst with so much color and verve, embodying the prevalent humor. The city even feels like a character – a common trait found in many detective noir stories. Editing is key in making comedy click, and Joel Negron’s work does just that, ensuring that the humor – in its many forms here – snaps, crackles, and pops. The music also beckons the audience into this time period, bathing us in funky tunes and soothing songs to create one hell of a rhythmic atmosphere. 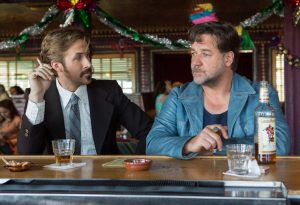 Smartly written and bursting with energy, The Nice Guys is a quintessential buddy film that does measure up to some of the classics from its genre. Though its near-nonsensical plot may confound some, it sure knows how to utilize its characters to deliver what it envisions. Black returned to the genre that he revitalized before, and by Jove, he’s done it again. If you’re in the mood for some lighthearted adult entertainment, please go check this flick out.