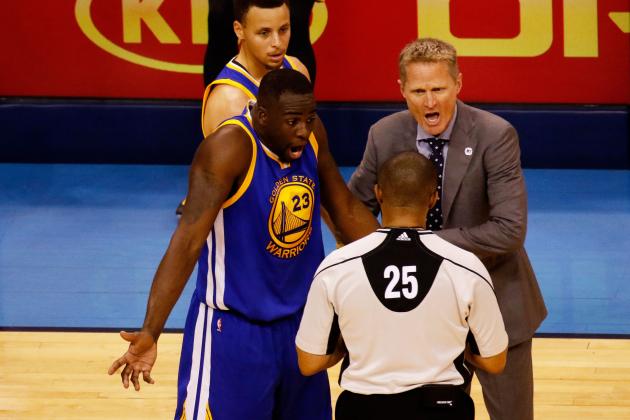 My only comment is that the high road is usually taken without declaration. I’m pretty sure that by letting people know that you’re traversing said road, you immediately get booted off by high road patrol and land on either the mid-level or low road…

People can talk about whether or not this was the right decision but based off the letter of the law in the NBA rulebook it’s certainly fair. The thing I find most interesting is that for a team that claims they’re confident they can beat the Warriors, the Cavs players and organization seemed to be doing a lot of lobbying for the punishment. This is all neither here nor there as the Warriors are now faced with the unfortunate truth of the matter: they will be playing without their (arguably) most important player.

As I mentioned previously, I don’t think the Warriors will beat the Cavs without Draymond. He is the key to their switch-happy defense; his physicality and length allow them to play “small” because he can bang with the bigs. He is also the player that makes guys like Frye and Love unplayable. He neuters them offensively and they can’t keep up with him defensively. Losing Green’s versatility basically takes the Warriors’ strategic identity away from them.

But that’s not to say they can’t win. Here are some things the Warriors can do to beat the Cavs without their vocal, emotional, and spiritual leader:

Without Draymond to anchor the defense, I see this as being more of a shootout. The Warriors can probably score with the Cavs but it will take a lot of strong individual performances. The space they get when Draymond is on the court will disappear. Also, be prepared to see Love and Frye on the court more because they can now hide on GSW’s centers on defense. I also wouldn’t be surprised to see the Warriors play super small with Barnes at center – a high risk/high reward strategy they may need to pull out to try to throw the Cavs off their game. He just can’t handle defensive rebounding the way Draymond can.

As much as my head tells me not to, my heart will say the Warriors win this game. I have real concerns with Lue and his ability to take advantage of Draymond being out. I haven’t been a fan of the way he’s coached so far in the series. I also think the Warriors play best when they are facing adversity and it doesn’t get much tougher than this. I think Steph goes off for another 30+ point game and you’ll see lots of perimeter guys with 4-6 rebounds to help make up for Dray’s absence. They’ll come out swinging and the Cavs won’t be able to deal with the intensity within the Roaracle. Finals MVP goes to Steph.