If you missed it while it was airing on AMC I’d very quickly hop on Amazon and pay the $15 to purchase this six episode mini-series. With an incredible cast, a well-paced story, and beautiful backdrops, The Night Manager has been one of the more engaging television experiences I’ve had in quite some time. It has also further solidified my love for the magnificent Hugh Laurie and further strengthened Tom Hiddleston’s case for being one of the most talented actors currently on screen. MILD SPOILERS AHEAD. 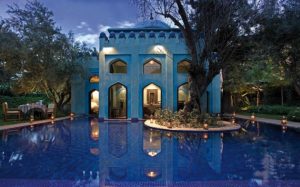 The Night Manager starts us off by introducing us to Richard Roper (Hugh Laurie). For those of you who correlate Laurie with the ubiquitous Dr. House, it will be jarring to see him play a charismatic and generally likable businessman turned philanthropist. The first look shows him discussing the importance of business in philanthropy and it gives us our first glimpse of the antagonist of the show. A quick transition to Cairo and you meet Jonathan Pine (Tom Hiddleston), the night manager of Cairo’s swanky Hotel Nefertiti. Within minutes you learn that he is charismatic, observant, and highly intelligent strictly based on his deft handling all potential conflicts that arise within the hotel’s walls. On top of all these traits, he displays a warmth that has thus far been elusive in Hiddleston’s previous roles. But it does not come out all at once. You see glimpses of it as he interacts with the characters he cares about, particularly Youssef, a young sous-chef on the hotel’s cooking staff. In all other cases, he is disciplined and stoic – a reflection of his time spent in the army. 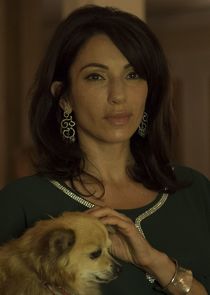 Trouble brews as he befriends the beautiful Sophie Alekan (Aure Atika) who is the mistress to the local mob boss’s son, Freddie Hamid (David Avery). She is drawn to the fleeting warmth that Pine shows and uses Pine to copy incriminating weapons sale documents and asks him to turn them over to the government if “something should happen to [her].” In them, it shows that it is none other than everyone’s favorite philanthropist, Richard Roper, who is providing the weapons to Freddie. Pine immediately turns over said documents to a friend in the British government. Despite Pine’s efforts, Roper’s inside men at high levels of the government cover up this little act of gunrunning and in turn, Freddie Hamid beats the hell out of Sophie because he knows she is the only person who would have that info. She confronts Jonathan and instead of being angry states that if she were brave enough, she would have done the same. And now they get… intimate. Jonathan promises to take her away from this life but it turns out, Roper really does have friends in high places and she cannot go home with him to Britain for fear of her life. She asks him to take her back to the hotel and shortly after, he receives a call from Angela Burr (Olivia Cohlman), who warns him that Sophie’s life is in danger and he needs to get her out of their now. All too predictability, he runs to the room and is too late – he finds her dead in a pool of her own blood. He alerts the authorities and as they make up some story about a burglar, he tries to protest. They threaten him, “Maybe you killed her” the cop says and the truth of the situation finally hits home for our unfortunate hero. 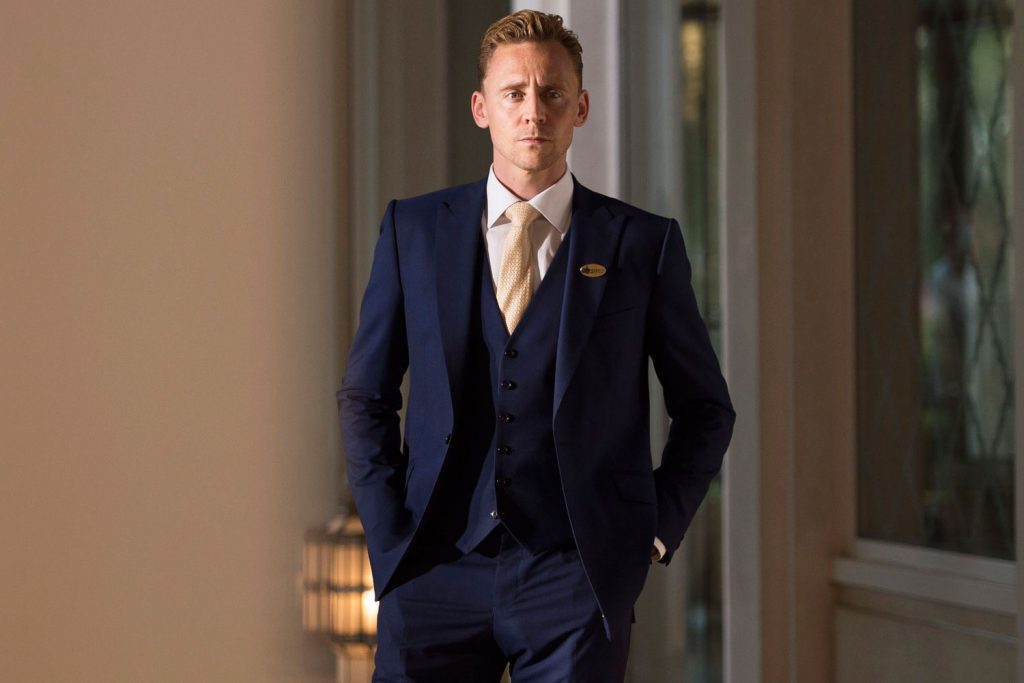 And there you have the base of your mini-series. 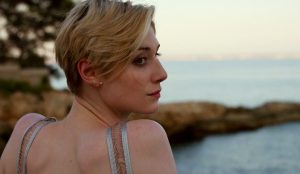 What follows is a classic revenge story with Jonathan Pine dedicating his life to hunting down Richard Roper, the man he ultimately holds responsible for Sophie’s death. Through a partnership with Angela Burr, Pine infiltrates Roper’s inner circle through good timing, guile, and severe personal injury. Although the first episode is a seriously slow burn, the rest of the series is fast-paced and filled with high pressure moments. The intensity of the moments are driven by a quality script and incredible performances from an all-star cast. Outside of the two male leads, Elizabeth Debicki plays the role of our leading lady, Jed. She does a wonderful job keeping the audience guessing at what her true intentions are during the course of the series. Standing at 6’3”, she is physically just as imposing as Laurie and Hiddleston and looks at home trading barbs with both characters as the stakes increase. While I initially felt indifferent about the character of Jed, the writing gave Debicki all the necessary opportunities to turn her into one of the more sympathetic characters in the show and by the end of the series, I felt as equally invested in her ending as I did Pine’s. 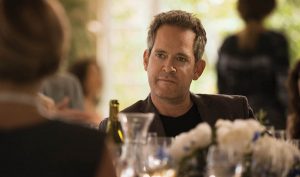 Tom Hollander turns in a wonderful performance as the ever-skeptical, perma-drunk Corky and his cruel and reckless drunkenness is balanced by a ruthless, coldblooded drive that gives one of the smaller men on the screen a very intimidating presence. The brick-a-brack of talented actors playing the various government agents, corrupt or not, all bring unique flavors to their roles whether they be pretentious, earnest, smarmy, or brash – every individual has their own role to play that balances the group. The frumpy Cohlman is particularly effective as she is quite clearly a high-level agent but presents herself as an unassuming housewife if not for her decisive words and actions.

And Mr. Hiddleston. The more I watch, the more I enjoy his performances. I’m not ready to call him a leading man, he’s almost too interesting to be your typical hero. There is a subtlety to his actions – he is built to be a character. This role shows him as a model of self-restraint plagued by inopportune moments of emotion and heart. His execution of playing a man playing someone else was sublime and while most films will often show the infiltrator learning to love their target, The Night Manager flips the script and forces our main character to temper his hatred in lieu of patience for the despicable “Dicky” Roper. The torture he endures is evident and Hiddleston’s performance show a man carrying tremendous guilt and wrath in his heart. But there is a goodness that is not often seen in his more popular roles and the beauty of the 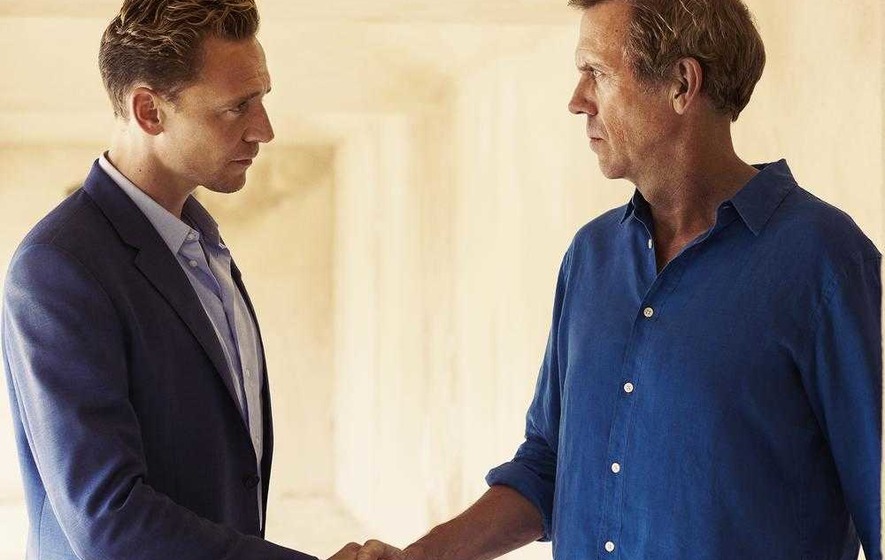 contrast makes those moments shine all the brighter.

Having put together such an amazing slew of performances, one would think that would be enough. But Hugh Laurie, he is what makes the series go. Much like House, the character he plays is frighteningly intelligent. But unlike House, he is charismatic and driven. He knows what he wants and he takes it. The scariest thing about Roper is not that he is ruthless. It’s his indifference in his cruelty. He is the villain that watches you slowly burn to death – and then enjoys a nice steak with a bold red. His chemistry with Hiddleston is amazing and he quite clearly likes the man – but always makes it clear that he is watching him very closely and would have no qualms removing him from the equation should Pine cross him. He is endlessly charming and is completely in control. Everything he does is calculated. It’s a chilling performance and cements Mr. Laurie as one of my favorite actors I’ve come to enjoy. Even in his final exchange with Pine, his glibness in the face of his potential ruin was so masterfully pulled off with a wink and a smile – incredible stuff.

The Night Manager is an exciting revenge story with amazing performances from some wonderful BBC regulars. The shows pace is not driven by action but smart storytelling and well-delivered dialogue – the performances keep you engaged and keep your blood pressure up in high-tension moments. Separated into a very manageable six episodes of one-hour apiece, it’s an excellent show to take in during a relaxing weekend at home.