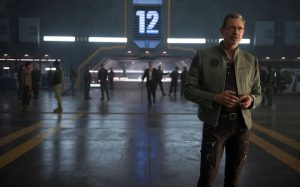 The film doesn’t breathe comfortably as much as it rasps due to a limp story. The structure and story beats are quite familiar here since they seem to be lifted straight from the first film. If anything, this feels like a refurbished feature, but there’s hardly anything fresh and new to be offered, making this a rather predictable affair. It’s interesting to see how humanity has progressed since the aliens invaded 20 years ago, but the film never allows us to settle into this world since all these developments – all jumbled together – go by in a breeze. The pacing problems don’t stop there, unfortunately – despite clocking in at a fair two hours, the film rushes and drags frequently, which doesn’t help the characters at all (more on them shortly). It even drops the ball on the aliens since they simply aren’t threatening in the slightest. Yes, we already know what they’re capable of and what they look like from the original film, but it’s frustrating how the film doesn’t really bother doing anything new with them. Sure, the ship is bigger, and sure, there’s a new type of alien, but neither instills awe and fear, so there’s truly nothing to build off of nor build up to with them. 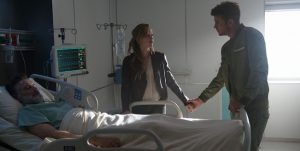 Perhaps the film’s biggest offense is how it’s bereft of good characters that you can emotionally invest in. Independence Day is full of them and builds from them, and they make up its heart, which is why it’s so enjoyable. The sequel seems to be aware of this too, and writer-director Roland Emmerich – as well as the four other writers who worked on this film – packs in a host of characters but doesn’t bother to build them up so they can breathe, leaving the cast to make do with slim pickings. There are too many to accommodate, and it certainly doesn’t help that a number of them are pointless and feel shoehorned in, like Julius Levinson (Judd Hirsch) and the pack of kids in tow. The majority of the new characters tend to either lack charisma or end up being as pointless as Julius. Jake Morrison (Liam Hemsworth), Patricia Whitmore (Maika Monroe), and Dylan Dubrow-Hiller (Jessie Usher) never rise above being generic and share non-existent chemistry with one another, while President Lanford (Sela Ward) and Catherine Marceaux (Charlotte Gainsbourg) honestly have no bearing on the plot, so they wouldn’t be missed if they weren’t here in the first place. Jeff Goldblum as back as David Levinson, but he’s handed a passive character who has no agency, so he’s merely sleepwalking through the entire picture. The only interesting characters here are former President Whitmore (Bill Pullman), Dr. Okun (Brent Spiner), and African warlord Dikembe Umbutu (Deobia Oparei), all of whom actually have scenes to milk.

At the very least, a film like this should have eye-popping visuals going for it, but if you ask me, it’s shockingly boring to look at. Scenes of mass destruction – which Emmerich specializes in – are surprisingly in very short supply. Even then, they’re dull to see unfold since Emmerich and cinematographer Markus Förderer opt to shoot them with predominantly wide shots in order to emphasize scale. We rarely see such sequences from a person’s point of view on the ground, so the terror and thrill that should be driving them is notably absent. They ultimately come across as just stuff made on a computer. That sentiment applies to the action scenes as well, and I couldn’t help but realize how hollow everything is, which goes to show that emotional investment in characters – not visual effects – are what power set pieces.

At a time when Hollywood is revisiting popular ’90s IP (Intellectual Property), you’d think that for a film as significant as Independence Day, Fox and the filmmakers would treat Independence Day: Resurgence with care and respect. Nope. To say that this is a competent sequel means to believe that the original film is a shitty movie, which it isn’t. I shouldn’t be this apathetic towards a movie, but that’s what happens when I’m watching a soulless feature with all the fun sucked out of it.