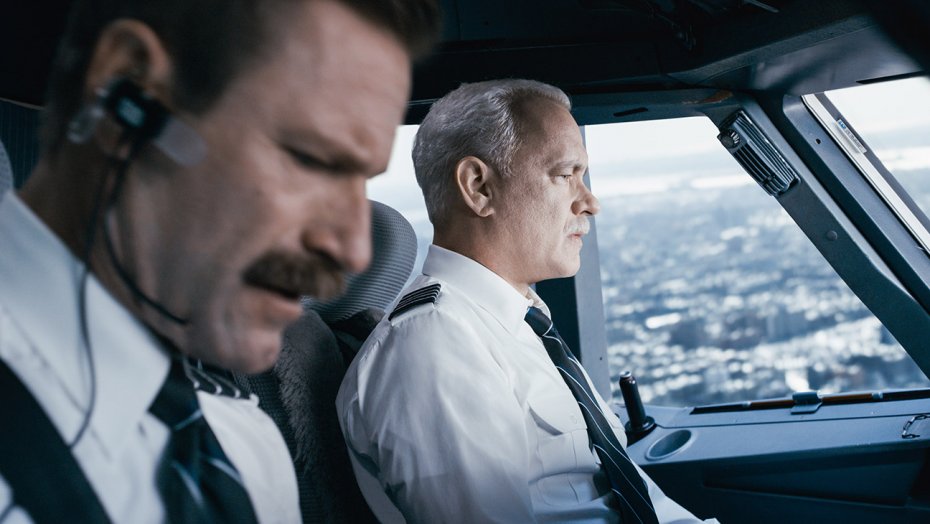 Not all amazing true stories translate into amazing films. In most cases, that comes down to the filmmakers’ storytelling decisions; think of how Lone Survivor and American Sniper respectively replaces and excises the most compelling parts of their material, or how The Walk stifles its narrative flow with jarring narration and breaks in the fourth wall. In some cases, the story is by design not fit to be made into a feature film. That just may be the case with Sully, which covers the 2009 emergency landing of US Airways Flight 1549 in the Hudson River. Clint Eastwood’s latest film clumsily attempts to build out from the Miracle on the Hudson and is unable to justify its own existence. 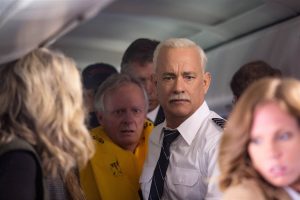 The film’s fundamental flaw is that it cannot tell a coherent, well-rounded story. It focuses particularly on the decisions made by Captain Chesley “Sully” Sullenberger (Tom Hanks) over a period of 208 seconds during the flight, which simply isn’t enough to craft an entire film out of. Sure, there are sequences prior to the plane’s takeoff, the rescue efforts, and the NTSB (National Transportation Safety Board) inquiries that Sully and First Officer Jeffrey Skiles (Aaron Eckhart) must attend, but they don’t come together as a comfortable whole because Eastwood and screenwriter Todd Komarnicki can’t settle on a throughline. They stuff in extraneous flashbacks to Sully’s past experiences on planes as well as nightmares that touch upon fears of plane-related disasters evoking 9/11, but these are clumsily implemented and just come across as attempts to lengthen the runtime. In the end, the film – with good intentions – tries to frame itself around New York’s finest, who came together and rescued the passengers on the flight, but that doesn’t ring true since none of them register as characters who breathe like Skiles and Sully, holding us at a distance from their actions. It certainly doesn’t help the climax, which reeks of pointlessness; there’s hardly any dramatic tension in the buildup to it, and it resolves in such a bland manner. 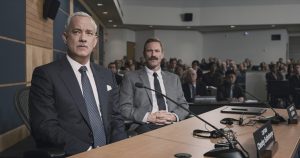 There are only three characters of any significance here, and the trio of performers who play them do low-key yet admirable work. Being the Jimmy Stewart of our time, Hanks fits very comfortably in his role as Sully, and he’s utterly convincing in his doubt, humility, and resolve without ever needing to be dramatic. Skiles is a man of few words, but Eckhart’s carefully controlled charisma allows the character’s good-natured humor and bubbling indignation to clearly shine through. Though she doesn’t share the frame with Eckhart and Hanks, Laura Linney delivers an emotionally charged and effective performance as Lorraine, Sully’s supportive yet worried wife. While she does talk into a phone every time she’s on screen, she puts her heart into it, and as a result, the Sullenbergers’ relationship feels authentic. 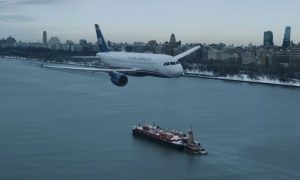 On a technical level, the film is adequately crafted and looks like a typical Eastwood pic nowadays, bearing the same blue-gray color scheme. The plane’s double engine failure and forced landing is obviously the highlight, but it’s surprising how nonvisceral it is since the interior sequences are filmed with a steady hand by cinematographer Tom Stern. Perhaps this style is meant to mirror Sully’s determination to stay calm, but there’s no immediacy since it doesn’t impart the feeling of terror from the souls on board. We revisit this incident several times over the course of the film either in pieces or from different perspectives, but what’s interesting about editor Blu Murray’s work is how he keeps it fresh as it plays every time. The score by Christian Jacob and the Tierney Sutton Band is nice, but it is cued in rather awkwardly.

The Miracle on the Hudson is by itself an amazing story, but in trying to build out from it without a proper throughline, Sully ends up being an aimless and muddled picture. One could argue that this true story can indeed translate into a feature film, but if this is the best that can be offered, then it should have been left alone.