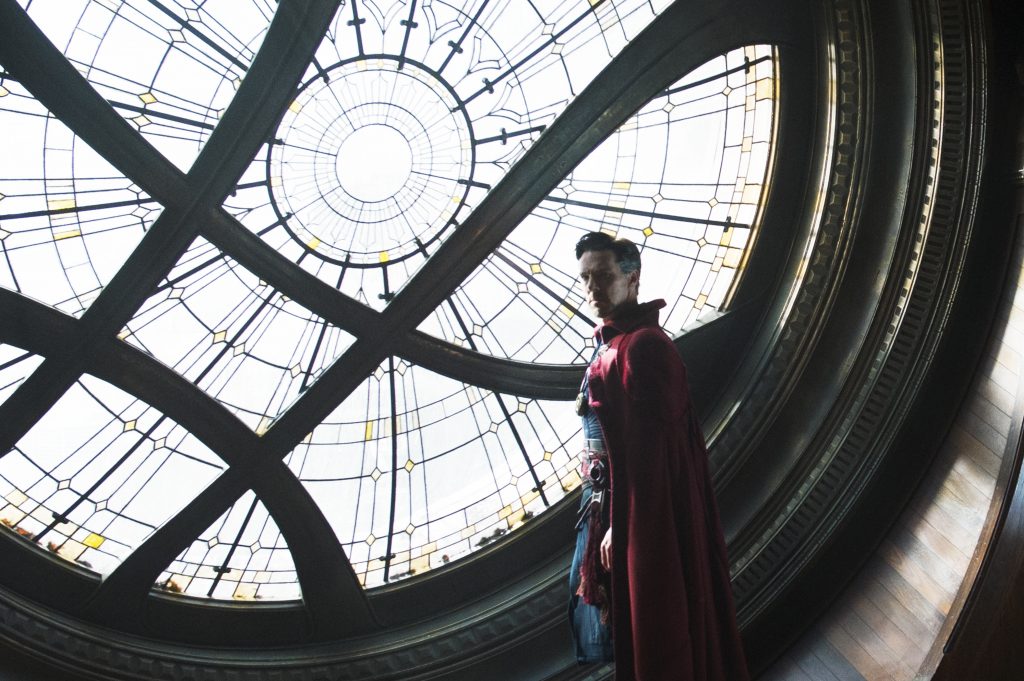 Eight years have passed since 2008’s Iron Man, and the MCU (Marvel Cinematic Universe) has brought forth a whopping 14 films featuring God knows how many characters. That’s quite an achievement, but honestly, all this isn’t even the tip of the iceberg. The MCU is called a universe for a reason, and anyone who grew up reading the comics knows that there’s a wealth of potential superheroes and supervillains to bring to the big screen. Will that lead to the long-foretold superhero movie fatigue? Perhaps, though it would be a certainty if all the films feel the same – a predicament Marvel Studios would like to avoid. As we enter a whole new world with Doctor Strange, the filmmakers make this journey as unique as possible without ever losing the MCU’s sense of fun, even though they can’t fully escape the pitfalls of telling a familiar story. 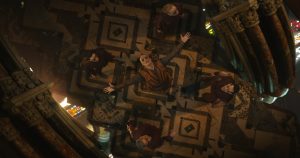 After the brilliant yet arrogant neurosurgeon Stephen Strange (Benedict Cumberbatch) loses the use of his hands in a car accident, he aggressively pursues experimental and new healing methods. Having spent the last of his resources, he finds himself in Nepal, where he stumbles upon a mysterious group of sorcerers in the secret compound of Kamar-Taj. Under the tutelage of the Ancient One (Tilda Swinton), her faithful confidante Mordo (Chiwetel Ejiofor), and Kamar-Taj librarian Wong (Benedict Wong), Strange begins to learn the ways of the mystic arts, soon proving himself to be an advanced and committed student. However, it isn’t long before he is dragged into a conflict between the Ancient One and her former student Kaecilius (Mads Mikkelsen), who has become disillusioned and has already put his dark and nefarious plans into action. 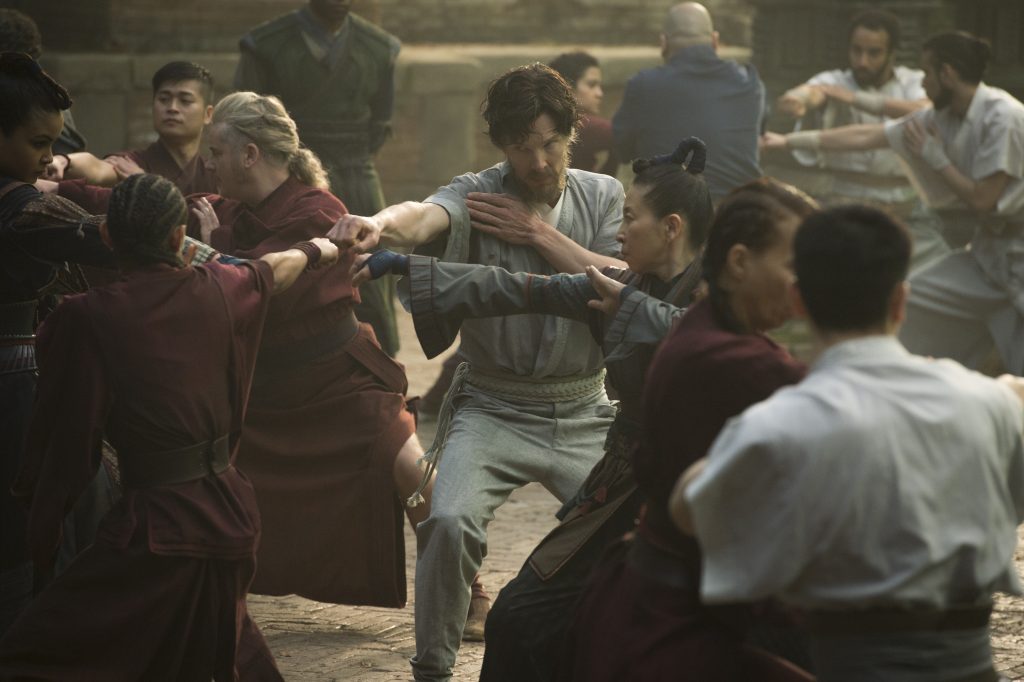 If you think that Doctor Strange is a cookie-cutter story, you’re not exactly wrong. It is, after all, an origin story, which tends to be the studio’s preferred route when introducing a new leading superhero. However, if you so happen to be someone who has seen a majority of the MCU films, you’ll notice that a lot of the beats are similar to those in other films. Many comparisons will be drawn between this and the first Iron Man, as Strange’s arc is nearly identical to Tony Stark’s, right down to their very personalities and the lessons they learn over the course of their journeys. In a worst-case scenario, some will argue that the film is bland, perhaps even boring. 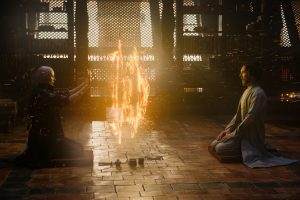 The film is certainly operating with a familiar narrative, but writer-director Scott Derrickson, along with co-writers Jon Spaihts and C. Robert Cargill, infuse it with plenty of interesting flavors to craft a unique experience. The fact that the world of Doctor Strange involves the mystic arts means that a new dimension has been exposed in the MCU, and to understand what this entails (the astral plane, altering reality, etc.) demands our full, undivided attention since there’s so much to take in. Watching it unfold is exciting, especially when we consider the countless possibilities that open up as a result of the characters’ actions; Strange too is learning about all this for the first time, and his emotions more often than not reflect ours. Admittedly, the worldbuilding process can be a bit clunky and muddled, and not helping matters is how the film relies heavily on exposition in order to move along. And move along it does, which owes a lot to Strange picking up the mystic arts rather quickly, though the film provides ample reason for that. What’s quite nice is how this can be considered a stand-alone film, as Derrickson, Spaihts, and Cargill hardly emphasize its ties to the rest of the MCU aside from a comment or two. 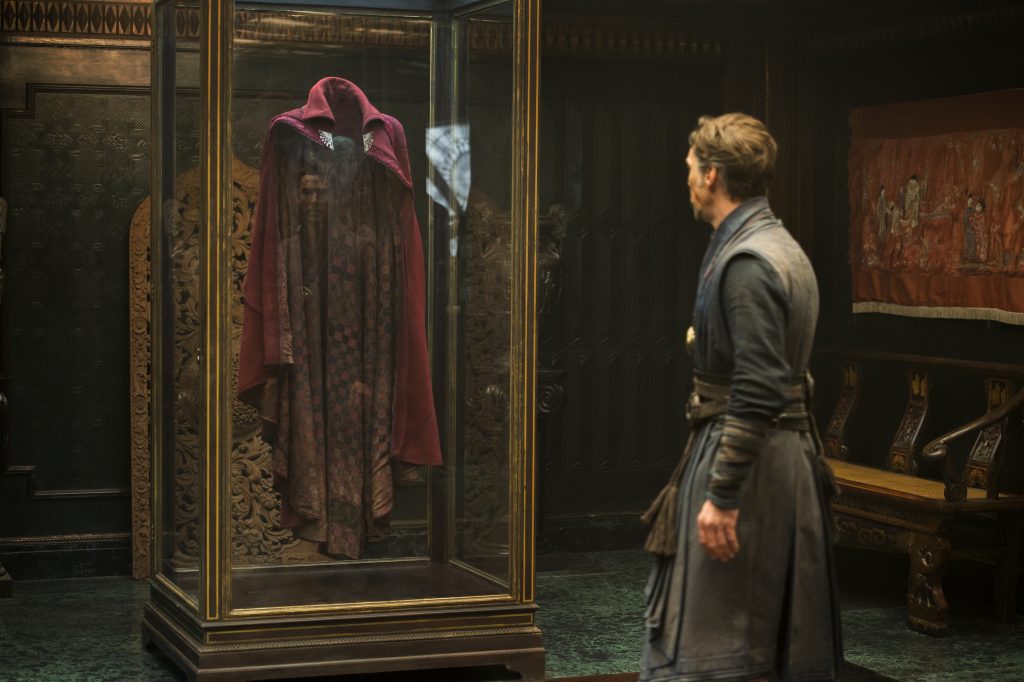 While Doctor Strange isn’t the first film in the MCU to venture into dark territory, it’s one of the very few where the ideas truly resonate while still being an overall fun affair. The characters regularly touch upon the themes of selfishness, fear of death, pursuit of immortality, and time as the enemy of all. These are some pretty philosophical ideas, and not only does the film use them to effectively build up the stakes, it handles them with great care and sensitivity, culminating in one of the most melancholy and tender scenes so far in the MCU. Of course, all of the entries in the MCU generally share a consistent fun tone, and the film dispenses much humor between the drama. This is a funny film, and select comedic beats – from Wong’s seeming lack of humor to the Cloak of Levitation, which joyfully has a personality of its own – have arcs, meaning that it gets progressively hilarious as it pops up time and time again. 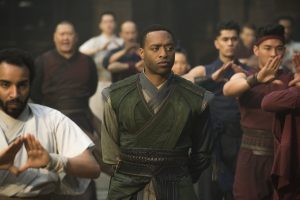 An interesting motley of characters populate this world, and for a non-ensemble film, it has some downright compelling major supporting characters. While Strange himself can’t shake off the Stark comparisons, he somewhat manages to stand apart due to his medical background as well as the way his arrogance plays out in the story. The most fascinating characters lie in the three sorcerors who are his allies: the Ancient One, Mordo, and Wong. Each is captivating in his or her own way, like the Ancient One’s mysteriousness, Mordo’s rigid morality, and Wong’s knowledge, and the three of them flesh out this world very well. The same can’t be said for Kaecilius; while he serves as an intriguing foil to Strange, he is basically a one-dimensional villain whose ultimate plan isn’t all that dissimilar to those of other MCU villains, which goes to show that Marvel hasn’t exactly shed itself of the villain issues that plagued it in Phases One and Two. The character of Christine Palmer (Rachel McAdams) – friend, fellow surgeon, and ex-lover to Strange – doesn’t play out in the way that one would expect, though the role does seem rather extraneous. 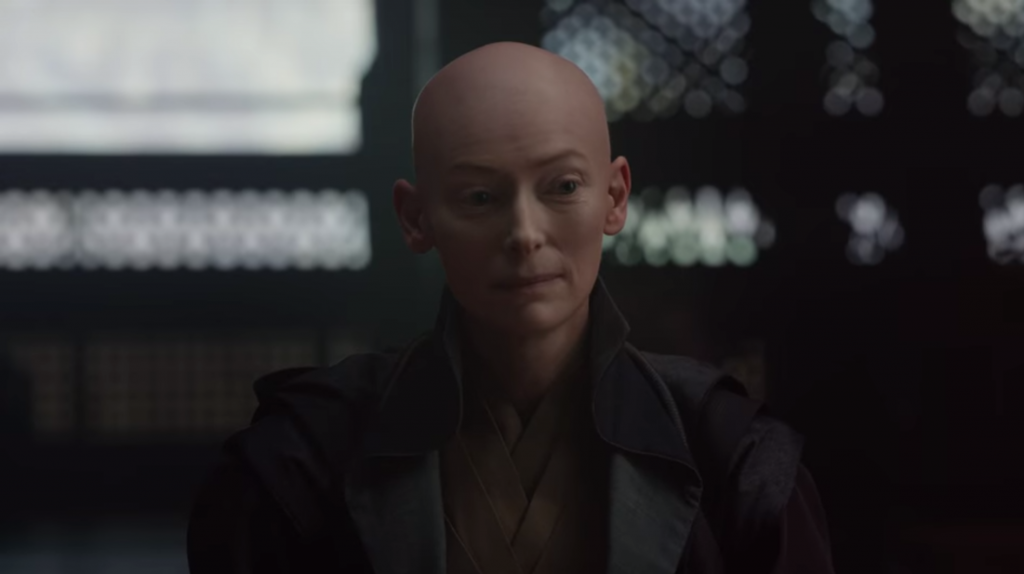 Doctor Strange holds the unenviable distinction of being the most controversial entry in the MCU so far, and it comes down to the fact that the filmmakers whitewashed the Ancient One. In the comics, the character is portrayed as an Asian man, and when you take it at face value, making the character white certainly seems like a racist casting decision. However, having now seen the Ancient One’s purpose and role in the film and having read Derrickson’s comments on the matter, I believe that by bringing the Doctor Strange story to the big screen, the filmmakers were in a lose-lose situation where the Asian American community (or at least subsects of it) would be offended regardless of whatever decision was made. I think it’s good that Derrickson owns up to whitewashing the Ancient One, and if anything, I do like how their approach to the character results in one of the more compelling female characters in the MCU. That said, I’m personally not too bothered by the controversy, though I do sympathize with those who are angry about it. Ironically enough, the film is arguably the most diverse one in the MCU, where we see characters of all races populating this world. 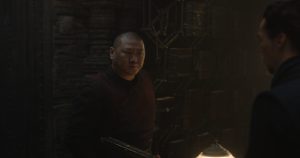 Marvel’s go-to casting director Sarah Halley Finn has once again knocked it out of the park by assembling a marvelous cast, and while not everyone has a great character to work with, no one puts a foot wrong in terms of performances. Cumberbatch – bearing an American accent – is terrific in the titular role, stretching arrogance to a T and showcasing his sardonic wit. Ejiofor adopts a steely demeanor to impart Mordo’s strong sense of morality, lending him an authoritarian edge and thereby making him a force to be reckoned with. An androgynous-looking and graceful Swinton nails the Ancient One’s otherworldly aspect, and she gets many laughs out of her sly and teasing personality. Also fantastic is Wong as, well, Wong; his serious disposition goes a long way in achieving humorous effects, and he shares a wonderful chemistry with Cumberbatch (the other Benedict, if you will). Mikkelsen is certainly threatening as Kaecilius, but given the character’s lack of depth, it’s a role he can play in his sleep, rendering the actor unfortunately underserved. Ditto for McAdams, Michael Stuhlbarg, and Benjamin Bratt, with the latter two portraying rival surgeon Nicodemus West and former paraplegic Jonathan Pangborn respectively. All three are fine in the roles they have, but being talented performers, why saddle them with what are ultimately thankless characters? 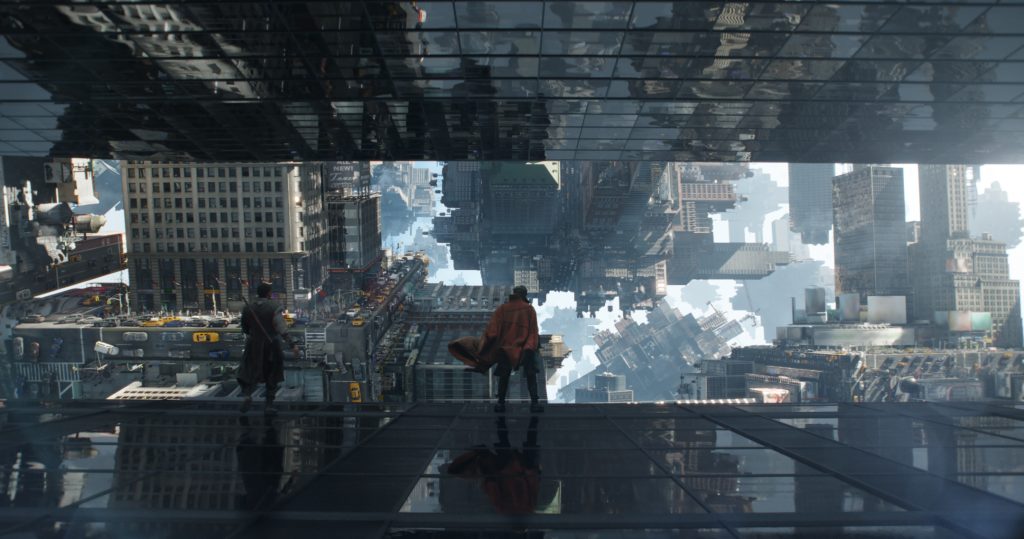 I mentioned earlier how the film is a unique experience, and the visuals play a huge role in it. Simply put, this is a must-watch in IMAX 3-D. Though it wasn’t filmed in 3-D, the converted 3-D in post-production is quite impressive, especially when we zip through some kaleidoscopic and psychedelic sequences – think of the city-folding and hallway-rolling moments from Inception, and multiply by 10 – that not only are just mind-bending and irresistible. Though the image can get murky during the night scenes or whenever the subjects are shrouded in heavy shadows, the colors from the characters’ spellcasting lend a liveliness to such moments. I would even go so far to say that this is the most colorful film in the MCU since Guardians of the Galaxy. The fact that the film was filmed using large format lenses highlights the sheer scale and endless possibilites of the film’s world. 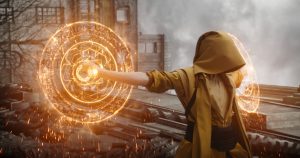 Indeed, the film ensures that we’re in for a visual and audial treat throughout. The fight choreography, which consists of both hand-to-hand combat and spellcasting, is utterly creative and lively, ranging from frantic when Strange and Mordo face off against Kaecilius and his zealots to tranquil when the Ancient One enters the fray. Also impressive is the sound design for the spells, as conjuring them results in crackles and teasing hums. Lately, the MCU has come under criticism for having forgettable scores (a position I disagree with), and whoever agrees with that sentiment may find a great rebuttal with Michael Giacchino’s dynamic and pulsating score. While certain tracks do seem reminiscent of his work on the recent Star Trek films, the music – complete with chants, electric guitar strums, and harpsichord inserts – is an absolute perfect fit for the film’s trippiness and spirituality. 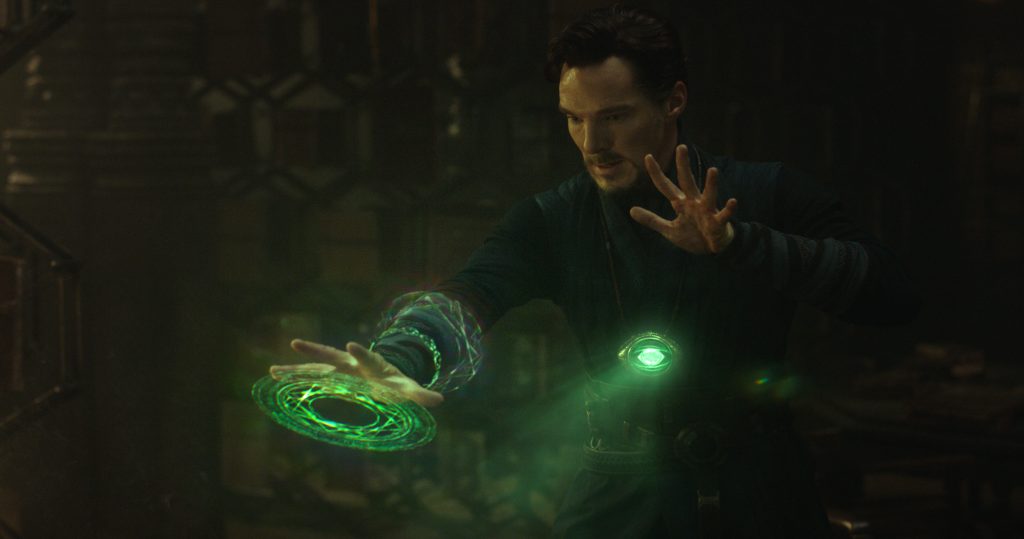 Following the excellent Captain America: Civil War from earlier this year is no easy feat, but Doctor Strange stands apart by building its themes and emphasizing its psychedelic splendor, ensuring that Phase Three for Marvel is off to a strong start. There’s no doubt that the familiar storyline and whitewashing controversy are black marks against it, but it does manage to move forward in spite of them, and I can only hope that Marvel will right the ship in the future and continue onward. In any case, Marvel’s future is quite bright. Superhero fatigue? Not for Marvel, that’s for sure.

I suppose an updated ranking of the MCU films is in order: