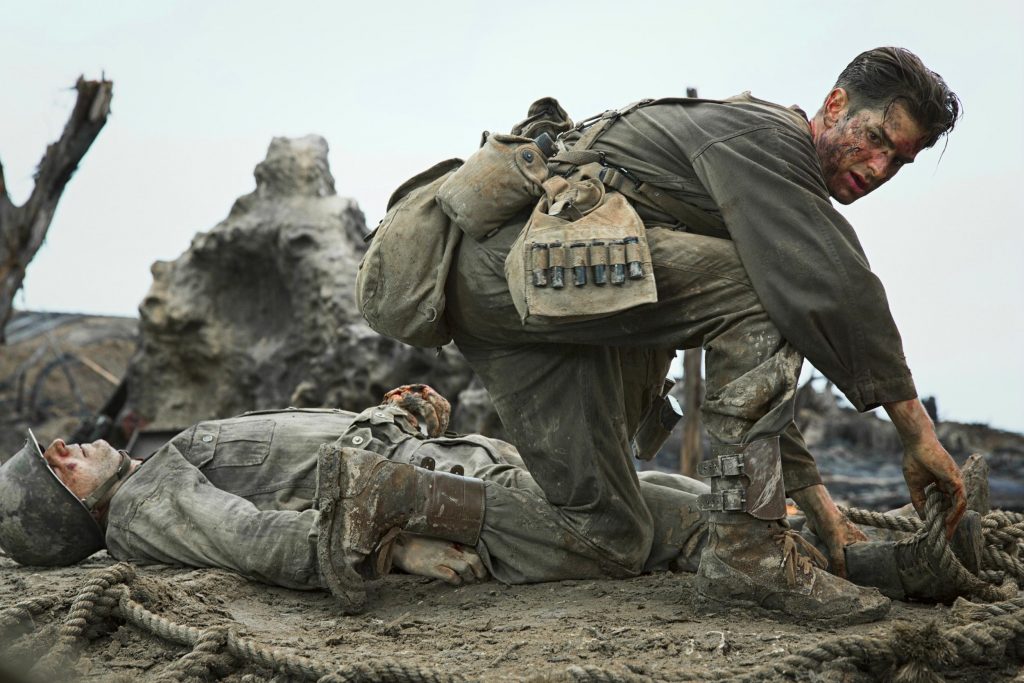 Say what you want about Mel Gibson, but he was born to make movies. Hollywood and the general public have treated the formerly well-regarded filmmaker and star as a pariah for over a decade, and while he has appeared in a handful of films recently, he has been absent from the director’s chair until now. With his previous projects, he tackled William Wallace, the Crucifixion, and the Mayans, demonstrating a desire to venture into waters that studios dare not tread as well as a keen sense of visual storytelling. His first film in 12 years takes him to the incredible true story of Desmond Doss, the only conscientious objector and combat medic who was awarded the Congressional Medal of Honor in World War II. While Gibson is no stranger to violence, he approaches it differently this time around, as instead of just reveling in it, he uses it to clearly reinforce Doss’ heroic pacifism. Hacksaw Ridge can be clumsy and heavy-handed, but Gibson’s appreciation for his subject comes through in a tremendous cinematic manner. 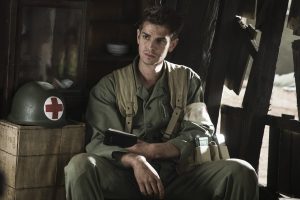 The story, written by Andrew Knight and Robert Schenkkan, isn’t particularly refined, though it does keep us emotionally invested in Doss (Andrew Garfield) and the proceedings. There are no less than four stories being told in the film – a coming-of-age story, a love story, a courtroom drama, and a war drama – and the middle two are stuffed with almost every single cliché imaginable, some of which are almost unbearable. Thankfully, Gibson absolutely knocks the war drama aspect out of the park, and despite the rather hackneyed nature of the first half of the film, he does clearly chart Doss’ arc and definitely establishes him as a character to empathize with, which in turn makes his eventual heroics all the more stirring. He can’t help but include plenty of biblical allegory and imagery, and some are too on the nose, like when the child Desmond (Darcy Bryce) stares at an image of Cain murdering Abel just moments after hitting his brother Hal (Roman Guerriero) in the head with a brick. It’s almost hilarious how the film takes a moment to introduce a number of Doss’ fellow soldiers, considering how we only get to really know one and that all of them end up being cannon fodder. The film ends rather suddenly, too, which is odd considering how one would expect characters like Doss’ father Tom (Hugo Weaving) and wife Dorothy (Teresa Palmer) to show up, but they are relegated to the film’s first half. 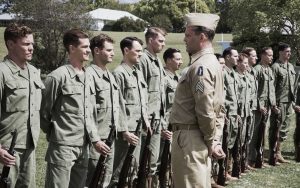 Gibson has assembled a solid cast, and for the most part, the performances service the story quite well. While Garfield’s tendency to crack a smile at inopportune times is odd at first, it’s meant to set the character apart from everyone else, and the actor gives it his all in doing just that. Balance that with his seemingly endless charisma and earnest, and what he delivers is a compelling performance unfolding on screen. As committed as Vince Vaughn is, his scenes as Sergeant Howell don’t seem to achieve their desired effect since they tend to turn out funny in spite of him being serious (he’s the company’s drill sergeant, so he yells a lot); it appears that he unfortunately may have been miscast. Armed with scenes where they slowly reveal their charaters’ humanity, Sam Worthington and Luke Bracey turn in good shifts as Captain Glover and Doss’ fellow soldier Smitty respectively. Weaving is terrific, nailing his emotional scenes with great use of body language. Palmer is charming, and it’s to her credit that she injects life into what is ultimately a one-dimensional and thankless role. 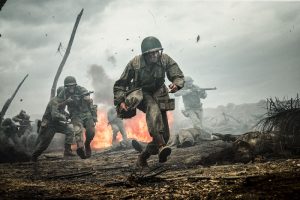 The film really comes into its own when it becomes a war drama, and Gibson pulls no punches in making the experience downright visceral. Needless to say, this is a extremely bloody and violent film. When bullets hit men, it doesn’t so much hit them as it does tear into them or blow off chunks of flesh. Indeed, soldiers get decapitated, get their limbs ripped off, and explode into crimson-gray mist. Even in death, the film doesn’t shy away from destruction, as we see guts strewn out in mud and maggots and rats feasting on rotting corpses. Whether it be deep in tunnels or out on the open battlefield, danger always lurks, and at times, it feels like we’re watching a horror film. Gibson effortlessly imparts the sheer carnage and the terror of warfare, and witnessing Doss stay true to his beliefs and grow in his conviction amidst the chaos and terror is nothing short of affecting. Not only does the director build up to the violence effectively, he also choreographs and frames it creatively, and we always know what to focus on. His crew are on the top of their game here, from Simon Duggan’s striking cinematography and John Gilbert’s sharp editing to the gory makeup effects and the cacophonous sound design and mixing.

With Hacksaw Ridge, Gibson demonstrates that his abilities and talents as a filmmaker have not waned during his long-term absence, and he puts them to good use in showing why Doss is considered to be such a hero. While it’s decidedly not a great film per say from a storytelling perspective, it certainly delivers when it matters most. Love him or hate him, Gibson is back, and he’s here to stay.