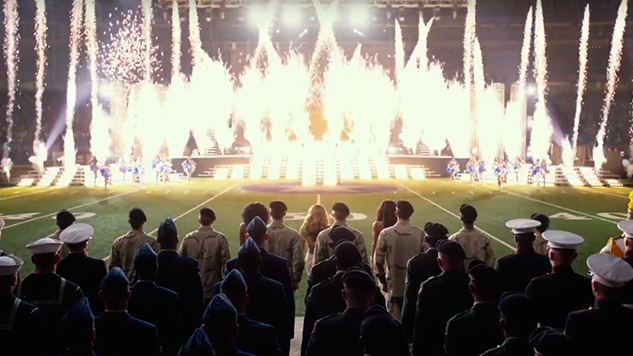 With the exception of perhaps westerns, no other films are as maligned these days as those about the Iraq War. To explain the rather tepid reception that meets these pictures, some will point to the disillusionment that many Americans have toward the conflict. While there is legitimacy in that, I think it also has to do with the stories they tell. Case in point: almost every single one of them are about soldiers returning home, having trouble adjusting, and suffering from PTSD. Ang Lee’s latest film, Billy Lynn’s Long Halftime Walk, seems no different on its surface, which could be why the renown filmmaker chose to shoot the film in 3-D at 120 frames per second at 4K resolution – to enhance the characters’ emotional and harrowing experiences. Alas, this technique proves to be nothing more than an interesting experiment at best, and it doesn’t help that the story isn’t as engaging as it presents itself to be. 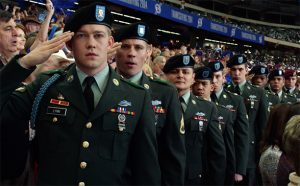 Jean Christophe-Castelli’s script, adapted from Ben Fountain’s novel of the same name (which I haven’t read), is a haphazard affair. It feels cobbled together, where the scenes in a sequence rarely complement, resulting in a picture that can’t breathe comfortably. The film meanders from scene to scene, and while there certainly are some good moments to be found, it goes to show that the film works only in fits and starts. That said, it’s difficult to truly invest in the proceedings, although Billy (Joe Alwyn) is a sympathetic figure whose emotional arc is clear, and the chemistry within his squad feels geuine. One way the picture tries to stand apart from other Iraq War films is how it explores how the American public misunderstands and manipulates its veterans for its own ideologies and purposes, and while this manifests in interesting ways, the theme is heavy-handed in its presentation. The awkward dialogue is proof of this, as the characters are content with spilling everything up front instead of progressively revealing their feelings and thoughts. The film also tries to wink at the audience when it comes to the some of the humor, but not only does it not feel earned, it’s plain distracting. 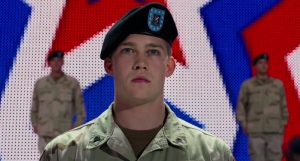 Lee has assembled a solid cast, though only a handful are well equipped to bring their characters to life. Alwyn’s big-screen debut goes incredibly well, and his performance suggests that he has a good career ahead of him. Not only does he stand his own opposite his more experienced co-stars, he also displays charm and nails his quieter moments, where his facial expressions say more than his words. Vin Diesel and Garrett Hedlund – playing the leaders of Billy’s Bravo Squad – meet the demands of their roles with ease, and each plays off of Alwyn well. While featured in only a few scenes, Kristen Stewart does some serious emotional lifting and provides a welcome break whenever she’s on screen as Billy’s sister Kathryn. Though Chris Tucker and Makenzie Leigh are probably giving it their all as Hollywood agent Albert and Dallas Cowboy cheerleader Faison respectively, they are saddled with characters that, frankly, are terribly written caricatures. While Steve Martin fares better in the sense that he has a decently written character in Cowboys owner Norm Oglesby, his performance is unconvincing. 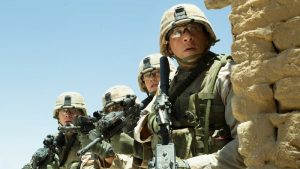 As bold as Lee may be with his decision to shoot in 3-D at 120 FPS at 4K resolution, the payoff from this technique unfortunately amounts to little. With Peter Jackson being the only other filmmaker who shot his films at a higher frame rate (his Hobbit trilogy was shot at 48 FPS), it’s definitely an abnormal practice, especially when considering the rather mixed reactions. Several criticisms of a higher frame rate still stand here, even if one’s eyes do adjust to it (mine did in the opening 10 minutes, much like they did when I saw the 48 FPS version of The Hobbit: The Desolation of Smaug years ago). The character’s smooth movements can feel unnatural when sudden, and the same goes for quick, jarring camera movements. Combined with the greater amount of pixels that comes with the 4K resolution, the higher frame rate brings out an astonishing amount of clarity and detail, seen whenever Lee and veteran cinematographer John Toll turn the camera on the football stadium, which is abound with activity given the sheer number of people present. Such scenes, along with those depicting heart-pounding combat in Iraq, are the only ones that warrant these filmmaking techniques, but even then, there are only so many times we can be content with watching characters watch football. The 3-D is extraneous; there are a few moments where it utilizes the “coming out at you” illusion, and it rarely enhances depth perception. The film is unusually bright – to compensate for the 3-D – as well, and at times, it does seem like we’re watching an expensively produced TV movie. Only five theaters worldwide (two of which are in the U.S., from the present looks of things) are capable of showing the film in its intended format and projection, so most audiences will likely end up watching the film at a standard 24 FPS in 2-D or 3-D.

Despite all the talent involved, Billy Lynn’s Long Halftime Walk turns out to be another casualty in the line of Iraq War films. Lee’s filmmaking techniques contribute little to a hamfisted story that doesn’t breathe as well as it should, and that’s where the film itself falls flat. No performance, no higher frame rate, no 4K resolution, and no 3-D can save that. Soldier on, these films must…