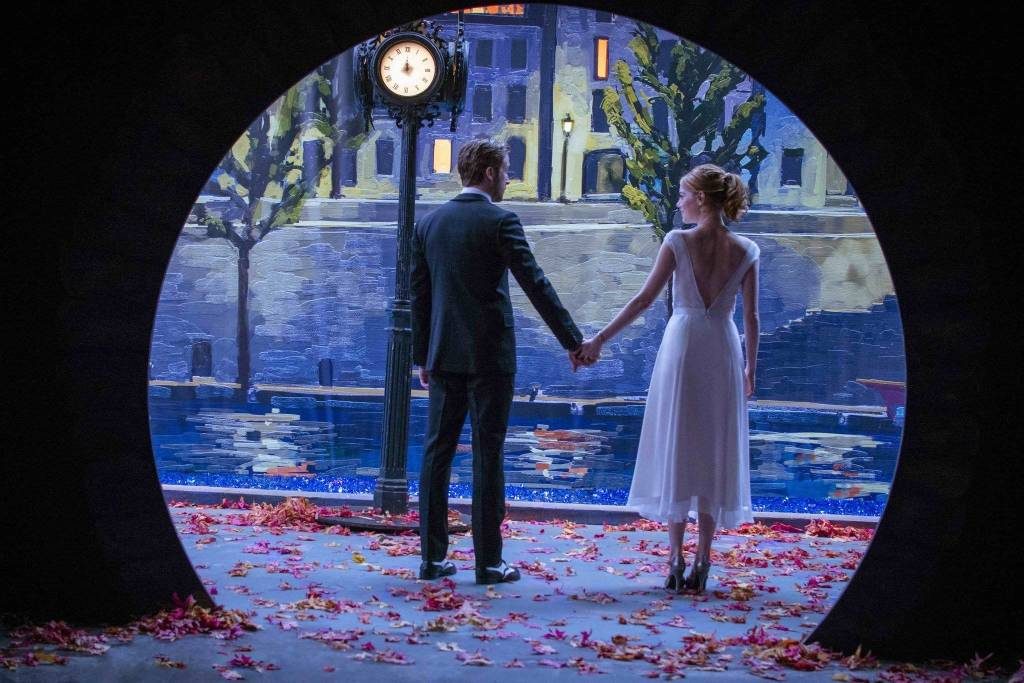 It’s too easy to be a cynic and a pessimist these days. Look at all that has happened this past year on a worldwide, national, local, or personal level; chances are, you’ll find reason aplenty to feel angry, discouraged, and numb about the world, humanity, life, or yourself. We’ve seen better times, and we need something that can inspire us to get back on our feet. Art – particularly the cinema – has long done that for us, but this time, it must be more than just an escapade. We need a film that doesn’t ignore the fact there’s a reality we must return to after the credits roll. And yet, that very film should continue to engage and ultimately galvanize us long after it ends. Answering this call is the impeccably crafted and irresistible romantic musical comedy-drama La La Land.

Los Angeles is a city of and for dreamers, and it has two in aspiring actress Mia (Emma Stone) and jazz pianist Sebastian (Ryan Gosling). When she’s not serving coffee as a barista on the Warner Bros. lot, Mia religiously auditions for roles, though she’s consistently demoralized by interruptions or a lack of interest in her. Fueled by a desire to open his own jazz bar, Sebastian takes on thankless gigs, often playing pieces that are clearly beneath his desires and talents. Initially encountering each other in a moment of road rage, the pair find themselves crossing paths several times, and they inevitably fall for each other. Their romance flourishes, but it’s put to the test as Mia and Sebastian discover that there’s more to pursuing dreams than just conflict and compromise – eventually, it requires sacrifice. 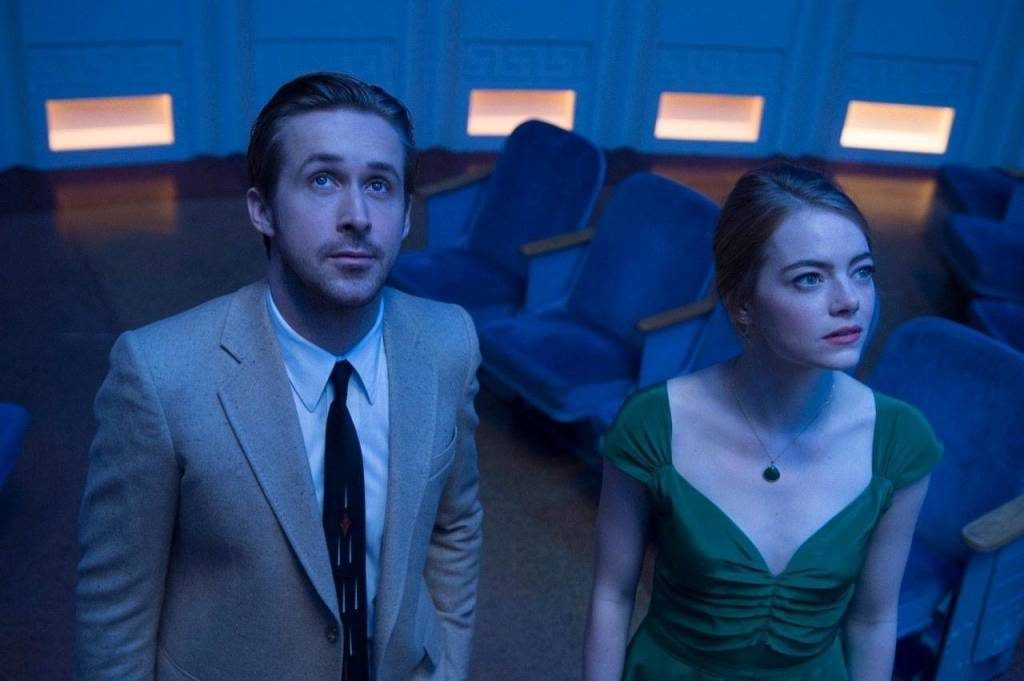 Mostly told over the course of four seasons, the story follows Mia and Sebastian, who boast compelling arcs. It’s fair to say they’re both struggling artists, but each has a unique background and deals with specific obstacles. Mia, a college dropout who traveled to the City of Angels, is caught in a frustrating cycle of opportunities and rejections, and that – along with Sebastian’s encouragement – drives her to seek other methods that showcase her creativity and talents. As for Sebastian, he stubbornly sticks to his ideals despite the ever-growing pile of unpaid bills, which causes him to butt heads with his sister Laura (Rosemarie DeWitt) and any employer willing to pay for his abilities on the keyboard – until he’s presented with an opportunity too good to turn down. Mia provides the heart, and Sebastian the mind. While their journeys have an unnecessary embellishment or two like the presence of Mia’s boyfriend Greg (Finn Wittrock), watching them play out is engaging from beginning to end. As Sebastian himself says, “It’s conflict, and it’s compromise, and it’s very, very exciting!” 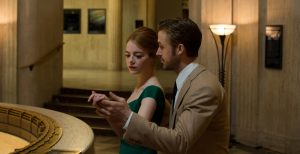 A pair of winning performances by Stone and Gosling bring Mia and Sebastian to life. Considering that La La Land is essentially Mia’s story, Stone does quite a bit of heavy lifting here, and she pulls the role off spectacularly. Combining a classical Hollywood look with a modern attitude and personality, she commands the screen; she injects the character with plenty of spark and hits every emotional note with ease, even when she doesn’t say anything at all. This is, without a doubt, a multifaceted and fully realized performance – one that will be remembered for a long time. While decidedly less showy than his counterpart, Gosling’s charm and uncompromising temperament go a long way, and the actor can play the hell out of the keyboard, which he learned for the role. Audiences know this isn’t Stone and Gosling’s first time on screen together (they previously appeared as a pairing in Crazy Stupid Love and Gangster Squad), so it’s expected that they have a crackling chemistry. Indeed they do, and watching them play off of each other is a tremendous joy, especially when they sing and dance with each other. 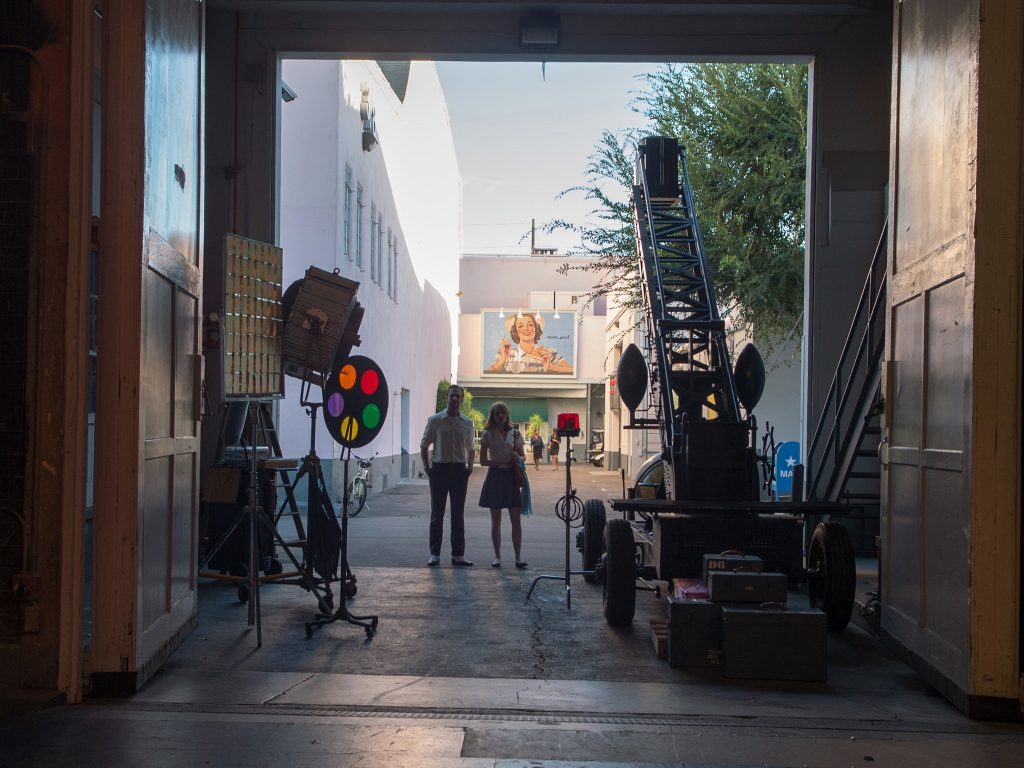 Walking a fine line between optimism and pessimism, La La Land proudly wears its heart on its sleeve. Though it’s intended for all ages (a few curse words notwithstanding), I imagine it will resonate among young adults, especially those in creative fields. The film doesn’t ignore nor diminish the frustration and heartbreak that can come from pursuing one’s dreams in reality, yet it always provides a beacon of hope that we can look for and toward. There’s a lesson to be found at the end of it, and while it’s not necessarily easy to stomach, it’s one that the audience can both be satisfied and galvanized by, much like that in Jacques Demy’s 1964 musical The Umbrellas of Cherbourg – a clear influence for this film (and a personal favorite of mine, I must add). It must be said that the film is quite funny, and much of its humor lies in not just the relationship between Mia and Sebastian, but also how it winks at the audience. It playfully pokes fun at the tenet of “It’s not about who you know, but who knows you,” the attitude of fighting against life until it wears out, and the state of creativity in Hollywood these days. This contributes much to the film’s overall sense of good cheer, which keeps spirits high but thankfully never gets sappy. That said, it’s hard to not get swept up in it. Really, that the film works this well on a reflexive, thematic, and tonal level is almost a miracle in itself. 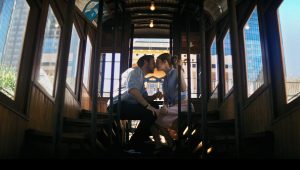 As noted by its title’s double meaning, the film is an affectionate love letter to Los Angeles. Writer/director Damien Chazelle (Whiplash) sweeps his audience across the city to visit its landmarks, from the Griffith Observatory and Hermosa Beach Pier to the Rialto Theatre and Angels Flight. As beautiful as these locations are, he’s careful to never make them the focus of the story – the characters are, after all. Regardless, they burst with tremendous color and personality, and the film looks at each one with a sense of adoration and idealism. Indeed, it’s safe to say that they’ll see plenty of activity over the next few months as moviegoers watch the film and flock to them afterward. It’s not always dreamy, though – Chazelle doesn’t forget the annoyances that come with living in the city, whether it be traffic on the 101 Freeway or the aggravating parking enforcement, which reflect the film’s dichotomy between dream and reality. Of course, the locations alone don’t make the city; the people contribute heavily to its identity, and the film highlights its diversity – a nice touch, especially when you consider its importance in today’s political climate. 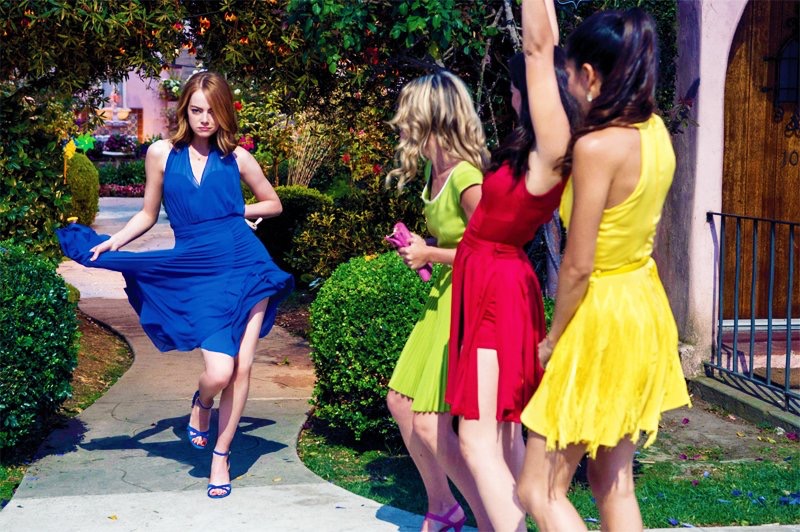 Under Chazelle’s direction, this becomes a breathlessly kinetic film full of boisterous, infectious energy. The camera, dictated by cinematographer Linus Sandgren, always moves – it spins, jerks back and forth, and maneuvers around activity. The use of long takes here is absolutely stunning, and they make their mark quite early, as the film’s first 15 minutes or so consist of just them (granted, they may have been edited in post-production, and if that’s the case, they are incredibly effective and fluid illusions). Shot and presented in the wide frame of CinemaScope, the film showcases not just the scale of the long takes, but also the commitment of the cast who perform for such great periods of time. Just as it’s a love letter to Los Angeles, the picture is also a love letter to the movies of old as well as classical filmmaking techniques, which editor Tom Cross expresses in his work. Dissolves, fades, irises, montages, and wipes – put to good use for terrific storytelling economy – link everything together and lend the film a dreamlike quality, which suits the film’s motifs of dreams and dreamers. He also ensures that the film moves along at a breezy and comfortable pace. 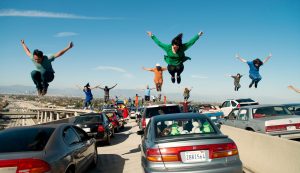 As a musical, the film is a resounding and wild success. Not only do the musical sequences sweep across a spectrum of emotions, they’re simply fun to watch. The disciplined and lively choreography – combined with Mary Zophres’ colorful costumes, the eclectic locations (as well as several exquisite sound stages, which are a nod to the making of classic Hollywood musicals), and some compelling low key lighting – makes for a series of breathtaking and dazzling sequences. Furthermore, each is distinct from the others, and a few even pay tribute to particular films, from tap dancing for Singin’ in the Rain to the composition of frame for Rebel Without a Cause. The multifaceted original songs being featured are just marvelous. “Another Day of Sun” and “Someone in the Crowd” are dizzying and soaring concoctions, Stone’s solo “Audition (the Fools Who Dream)” is a show-stopper, and “City of Stars” – sung by both Stone and Gosling – proves to be resonant. Stone and Gosling aren’t the best singers, but the emotions they convey feel authentic, and that’s what sells their songs. Playing over the course of the film is Justin Hurwitz’s lovely and poignant score, and his leitmotif is one for the ages. 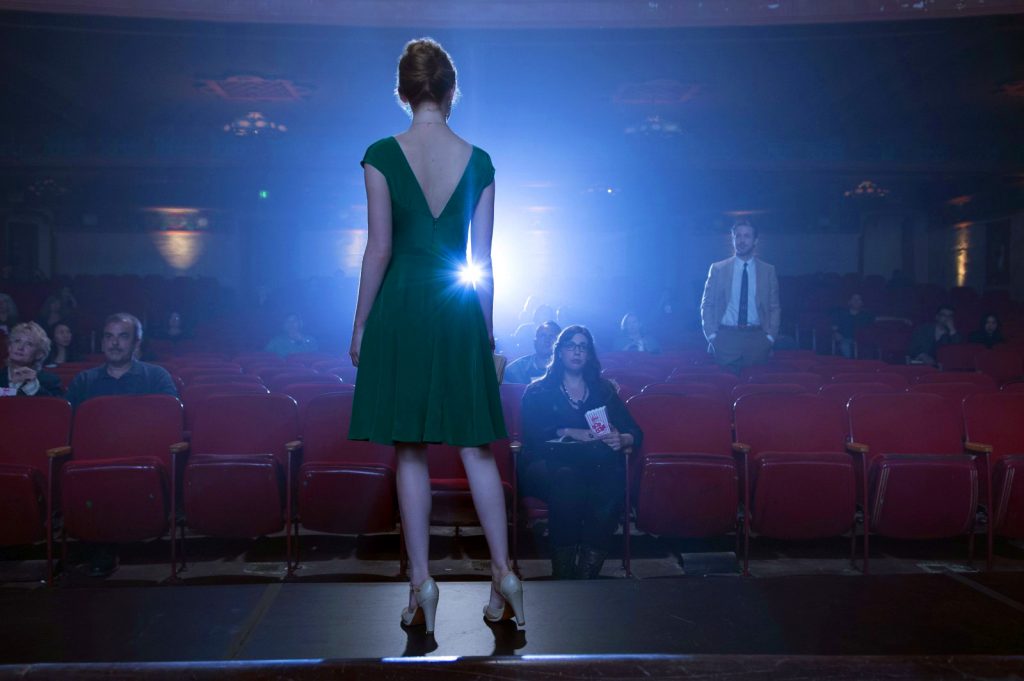 La La Land is a near-perfect film that, despite being such a well crafted film, feels more than just the sum of its parts. We don’t really see movies like this being produced anymore, so the fact that this is playing in theaters provides not just a welcome breath of fresh air, but also a compelling reason for audiences to go to the movies. What’s more, a film as reflexive as this is needed. 2016 has seen more than its fair share of terrible occurrences that have discouraged many a soul, so audiences need art reminding us that despite life’s relentless apathy, there’s always a light in the darkness worth chasing. La La Land does just that and more. How necessary is it, you ask? I need to see it again, stat.