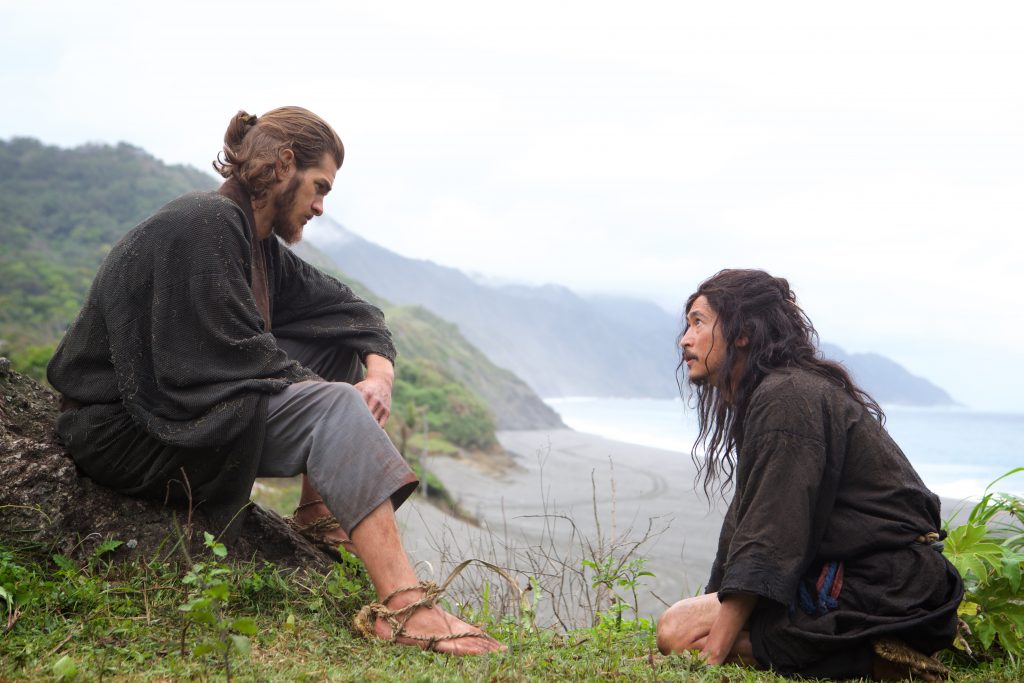 How do you make a film about the Christian faith? Certainly many have tried, and many still try. Some – particularly many modern Christian filmmakers – paint non-believers as the enemy or point to belief in God as an answer that magically fixes just about every problem. While such films do make considerable money at the box office, they seem self-congratulatory and delight in providing answers that reinforce spiritual identity. This is, in my opinion, an elementary treatment and understanding of faith which glosses over the fact that faith is a process, shaped by a constant and often painful struggle between what one sees and a loving God’s promises. Belief and doubt go hand in hand, and that juxtaposition lies at heart of Silence, Martin Scorsese’s complex and delicate adaptation of Shūsaku Endō’s celebrated novel. 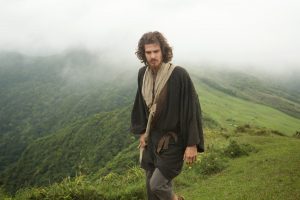 Two young Portuguese Jesuit priests, Father Sebastião Rodrigues (Andrew Garfield) and Father Francisco Garupe (Adam Driver) hear that their mentor, Father Cristóvão Ferreira (Liam Neeson) has apostatized while performing missionary work in feudal Japan. Shocked, the duo resolve to enter the country to not only find out the truth regarding Ferreira, but also aid the Japanese Christians, who practice their faith underground since Christianity is outlawed. Led by the cowardly and guilt-ridden Kichijirō (Yōsuke Kubozuka), the missionaries steal into Japan in 1639 and begin ministering to the hidden Christians in secret. Their joy from serving the Lord is short-lived, however, as they soon witness firsthand the shogunate’s brutal and callous persecution of their flock. As Japanese Christians lay down their lives for their faith, Rodrigues helplessly wonders why God is silent while His children suffer. 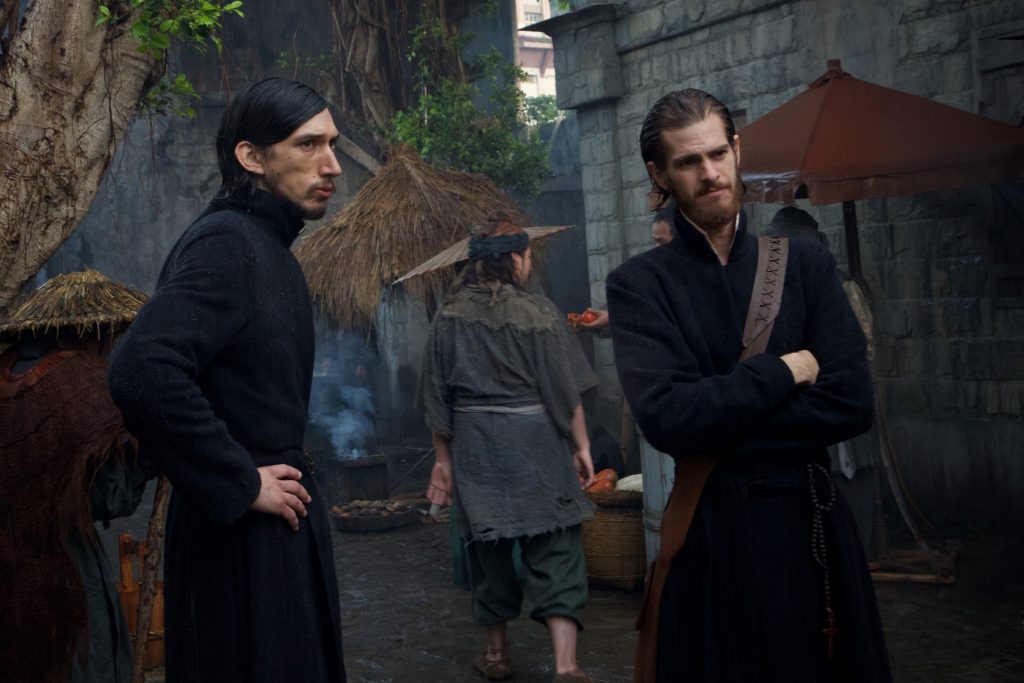 Before I continue with this review, I must admit to being compromised. I read Endō’s novel many years ago upon hearing that Scorsese was preparing to adapt the material for the big screen. As a longtime admirer of the filmmaker, I was already excited for the film, but what I wasn’t prepared for was the profound effect the novel would have on me as a believer. Endō’s words not only compelled me to wrestle with my faith, but also put both my practice and upbringing into perspective. It remains one of the finest books I’ve ever read, and upon finishing (and re-reading) it, I anticipated Scorsese’s film – described as a 28-year-long passion project – all the more. I’ve been following the production for several years now and remember many of its highlights, from the news that Gael García Bernal, Daniel Day-Lewis, and Benicio del Toro were being lined up for the picture to the speculation over whether it would premiere at last year’s Cannes Film Festival. I sought and watched Masahiro Shinoda’s 1971 adaptation of Silence (which is available to stream for paid subscribers at FilmStruck). I write all this to say I was emotionally attached to Scorsese’s film long before its release, and that – for better or for worse – does influence my assessment of it. 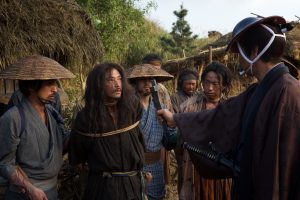 This is a tremendous adaptation, and one can easily sense Scorsese’s affinity for the material. Endō’s novel is difficult to adapt into a narrative film since much of it is told in Rodrigues’ mind (the first half is written in the form of a journal, with the second in the third person as well as a few letters). Scorsese, who co-wrote the screenplay with Jay Cocks, imparts the character’s spiritual struggle by having him narrate his feelings and thoughts over the course of the film. The practice may sound clunky on paper, but it works incredibly well here since it’s used not so much as exposition as it is a prayer to God. The filmmaker does excise a few key elements from the novel; gone are Rodrigues’ troubling thoughts about the role of Judas in God’s plan as well as the relationship with Christianity that both the inquisitor Inoue (Issey Ogata) and the unnamed interpreter (Tadanobu Asano) have. Of these, the latter arguably should have been included since it adds another facet to those two characters, and its absence points to how Scorsese clearly identifies with the priests’ point of view more than that of the Japanese shogunate (which sets his adaptation apart from Shinoda’s). The film isn’t a perfect adaptation, as seen by its unfortunately rushed climax, but there’s much to appreciate here, like the way Scorsese captures heinous violence with such clarity and impassivity to illustrate God’s silence. The writer-director may be at the peak of his powers, and it feels appropriate for him to tackle his longtime passion project at this stage of his career. 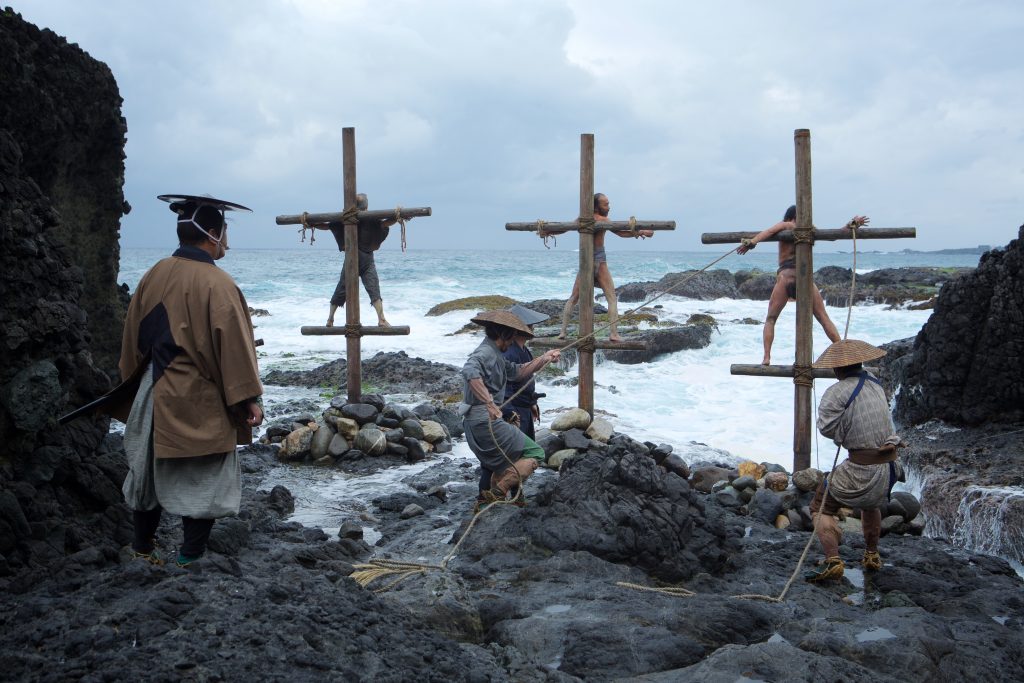 Endō’s thematically rich novel brims with thought-provoking ideas, and many of them are realized in Scorsese’s adaptation. These ideas drive the picture, and – much like the book – its power rests in how they engage us, both during the film and long after the credits have rolled. God’s silence not only begs the question of whether He exists, but also points to a more terrifying implication that He has abandoned His children. That, paired with the Christians’ suffering, is sure to bring up thoughts of how much God leaves to the ways of the world and what exactly His love entails. There’s the issue of pride and the pursuit of personal glory in missionary work (which we can connect to a white savior complex), particularly how it can cloud faith as well as the fundamental tenets of the Gospel. The fact that the Portuguese are sneaking into Japan brings up a contrast between the East and the West. The spread of Christianity correlates with imperialism and economic trade, which can be threatening for countries like Japan that want to preserve their national identity. Even if it does spread, can Western Christianity sprout and thrive in a completely different environment and people? The fact that the hidden Christians tend to be impoverished farmers and fishermen and that the shogunate is well off suggests a divide between the poor and the rich, which can lead to a Marxist reading of Christianity. Some of these ideas are inferred and others explicitly introduced, yet all are handled with tact and the intention of putting the nature of faith in perspective. 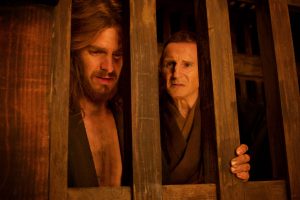 Each of the non-Japanese actors have a firm grasp of both his character and role in the story, and the resulting performance reflects that. Garfield’s transformation from an eager and soft-spoken priest to a hardened and weary man is nothing short of incredible, and his body language demonstrate the relentless battering that his faith takes. Though he isn’t in the film all that much, Driver understands that the resolute Garupe mainly acts as a foil to the sensitive Rodrigues, so his actions, attitude, and diction serve to highlight the contrast between the two. Even his distinct, sharp face juxtaposes Garfield’s boyish own, which illustrates and even foreshadows the differences in how the two characters live by faith. While not even attempting a Portuguese accent (Garfield and Driver, to their credit, try and generally maintain theirs), the usually gruff Neeson is surprisingly and effectively understated, as he assumes the demeanor of a defeated, lonely, and perhaps ashamed man. 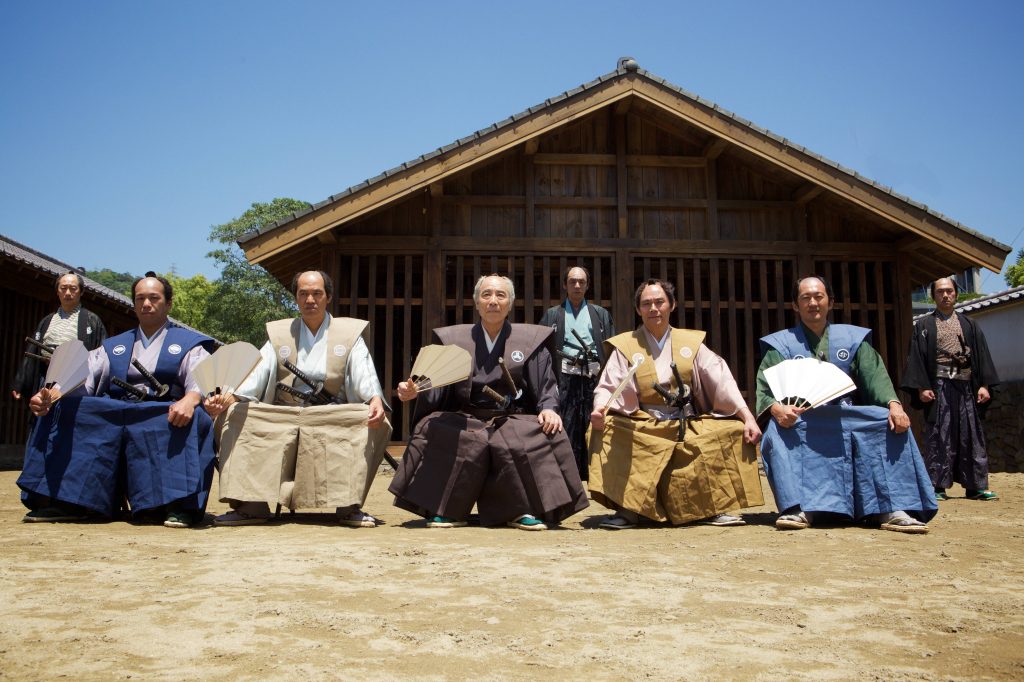 Scorsese has assembled a talented Japanese cast, and he gives them ample room to grow into their characters and deliver tremendous performances. The character of Kichijirō will undoubtedly come up in many analyses about the film, and Kubozuka brings him to life by imbuing him with incredible humanity and vigor. He can be heartfelt one moment and hilarious in another, but no matter what he tries to elicit from the audience, he clicks every moment when he’s onscreen. Ogata is a real joy to watch; as the high-pitched Inoue, he finds a crackling balance between mischief and ruthlessness, and the result is akin to Christoph Waltz’s Hans Landa from Inglourious Basterds. His physicality in particular proves to be quite handy – perhaps most exemplified in a scene where his whole body deflates for as he lets out an exasperated sigh. Also putting in a terrific shift is the silver-tongued Asano, whose ability to keep a cheerful disposition even in the most dramatic moments is evidence of the actor’s charisma. Of course, enough can’t be said about the determined Shin’ya Tsukamoto and steely Yoshi Oïda as villagers Mokichi and Ichizo respectively, as these two actors more than hold their own and seize their individual moments to shine. 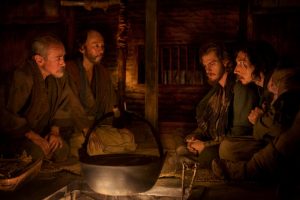 That the film is lovingly crafted from top to bottom shouldn’t be surprising at all, but the results from Scorsese’s crew is nothing short of astounding. Despite a gargantuan runtime of nearly three hours, the picture is paced very well, thanks to the filmmaker’s longtime editor Thelma Schoonmaker. Cinematographer Rodrigo Prieto captures breathtaking images and sequences by creating chiaroscuro lighting, restraining his camera movements, and using weather conditions like fog to build dread and tension. Dante Ferretti pulls double duty as production designer and costume designer, and his work – from the villagers’ grimy loincloths and run-down shacks to the shogunate’s lavish robes and spotless temple – not only feels tangible, but also emphasizes the dichotomy between the poor and the rich. The makeup effects are on point, as they illustrate in detail the effects of torture on the human body and also make Rodrigues look more and more like Jesus (which calls to mind the phrase, “What would Jesus do?”) as the story progresses. Though sparsely featured, the minimalist score by Karen Kluge and Kim Allen Kluge effectively reflects the theme of God’s silence, often relying on sounds from nature like cicada songs and waves. 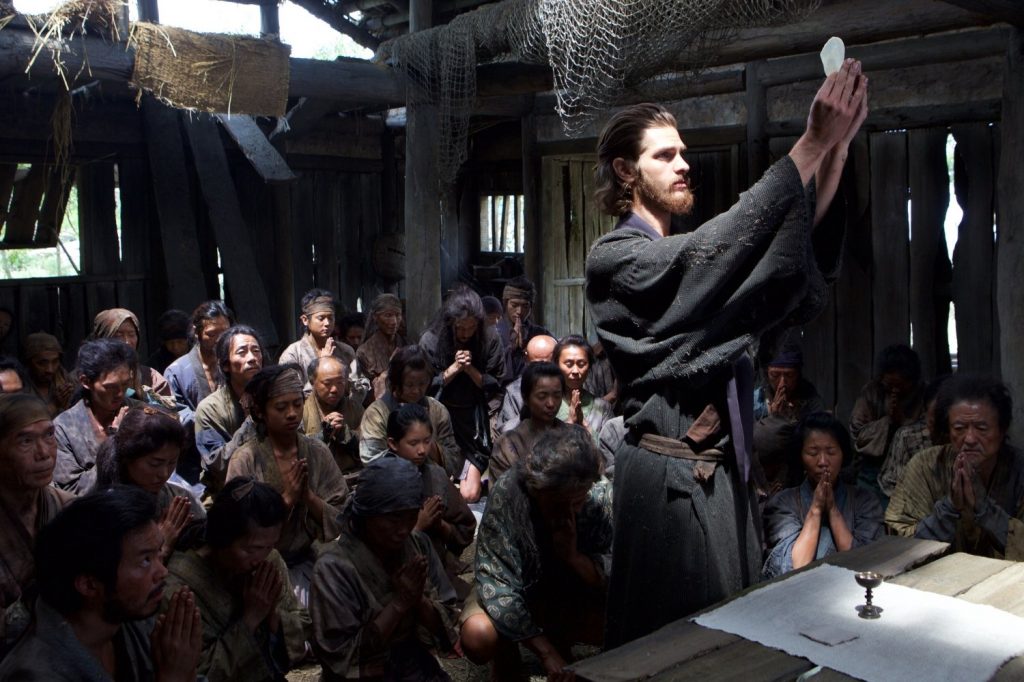 Silence provides no easy answer, instead gently and keenly exploring and prodding the often paradoxical intricacies of the Christian faith. Given its subject matter and runtime, I can’t say that it’s for everyone, but for those who choose to watch it with an open mind, the hope is that it will engage you and grow on you. Certain to spark many a discussion among moviegoers and compel believers to wrestle with their faith, this is a masterfully crafted and mature film of great power. Just as Jesus’ turmoil in Scorsese’s The Last Temptation of Christ may have moved you, may Rodrigues’ turmoil do the same.