Just like last year, this list comes a month late, so you can call me a straggler. Then again, just like last year, MediaBrewPub isn’t a full-time paid commitment, so you can call me a victim of circumstance. I’d love to publish these lists at year’s end, but since I’m not a member of a critics’ group or guild (which would grant me access to screenings and screeners), I spend my Januaries catching up on the movies that I either missed or need to check out – and even then, there are always a few that I fail to watch. I could postpone this for the sake of being comprehensive, but given that this is already February of 2017, now is the time to reflect on a year gone bye.

Ah, 2016. It was a year of tremendous change. No doubt many will think of last year’s political messes when I mention the word “change,” but the “change” that I think of is more personal. For me, last year saw a tremendous change in the way that I consume, process, and value cinema. My entertainment news fix changed when Devin Faraci and Drew McWeeny, two of my go-to movie bloggers/critics, respectively left the web and was fired by his publication. Their sudden departures (thankfully, McWeeny has turned to self-publishing) left me seeking others in the entertainment blogosphere, which led me to writers whose experiences and identities (typically pertaining to gender and race) affect how they interact with cinema. This idea of seeking voices extended to filmmakers as well. I sought out more films helmed by and featuring women, people of color, and members of the LGBTQ community. When watching last year’s movies, I thought about how the filmmakers’ own experiences and identities influence or even permeate throughout their works, which I sought to understand and came to value. That compelled me to want a film like the Ghostbusters reboot to succeed, led me to observe the discussion regarding a gay character in Star Trek Beyond with great interest, and also challenged my longstanding belief in separating art from the artist, as was the case with The Birth of a Nation. In a year of much change, I came out of it a different cinephile than I was before.

Regardless of whatever went down in 2016, it was a consistent and very strong showing for cinema. Normally I wouldn’t be excited about the first three or four months of any given year because they tend to be the studios’ dumping ground for crappy movies, but I was taken aback by the presence of great and memorable films during this period. I imagine some are disappointed with last year based on the number of underwhelming or just plain terrible blockbusters (especially during the summer), but had they chosen to spend their money on independent or medium-budget fare throughout the course of the year, I’d bet they would be singing a different tune. Honestly, 2016 had a lion’s share of tremendous films – many of which affected me greatly. What follows now is a list of such films: an amalgam of astounding craft, innovative filmmaking, pure entertainment, and moving stories. 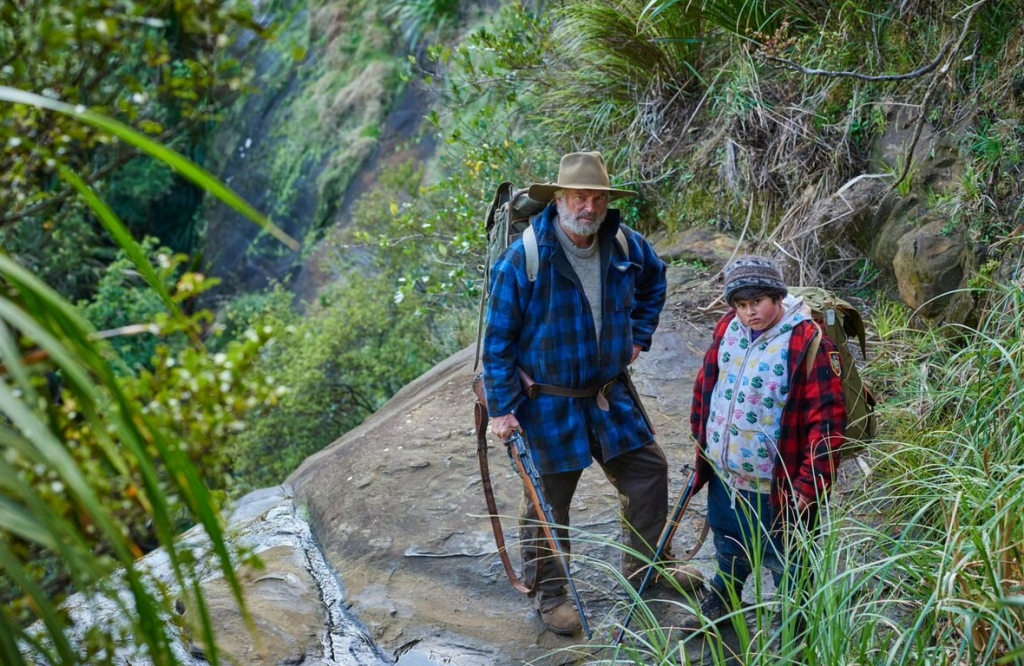 Photo courtesy of The Orchard

Before I proceed to reveal my top 10, I want to recognize my honorable mentions. I was transfixed by the sheer storytelling craft of Arrival and the way that The Handmaiden navigates through its themes of female empowerment and the male gaze. The irresistible charm at the heart of Hunt for the Wilderpeople, The Nice Guys, and Sing Street* had me grinning from ear to ear throughout. I was moved by the tender love between Mildred and Richard Loving in the gentle Loving, the quirky father-daughter relationship in the fun Toni Erdmann, and the sight of Jackie Kennedy grappling with the idea of legacy in the audacious Jackie. The bloody Green Room had me on the edge of my seat, while the splendid Hidden Figures filled me with joy. 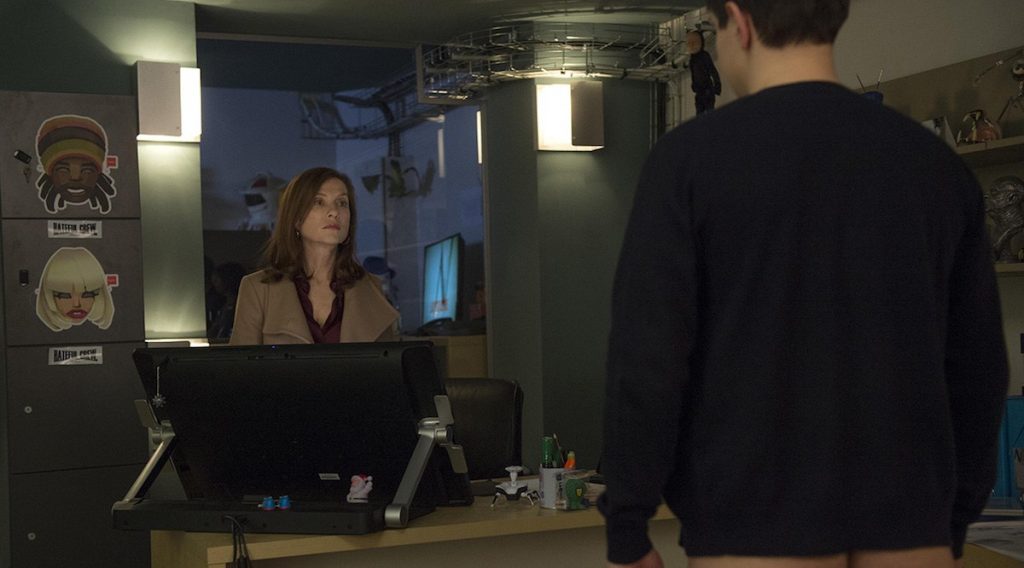 Paul Verhoeven’s sly Elle asks difficult and disturbing questions, and it provides no easy answers. Seeing that it opens with the rape of Isabelle Huppert’s Michèle, one would think that the film is about her coming to grips with it, but the fact that she calmly and rather nonchalantly carries on with her life mere minutes after the attack is the first of the picture’s many surprises and turns. It gleefully subverts gender dynamics and places Michèle in a place of immense clout, yet isn’t shy about showing that she’s no saint. No doubt this is a precarious balance, but that’s what makes the film so engrossing from beginning to end. 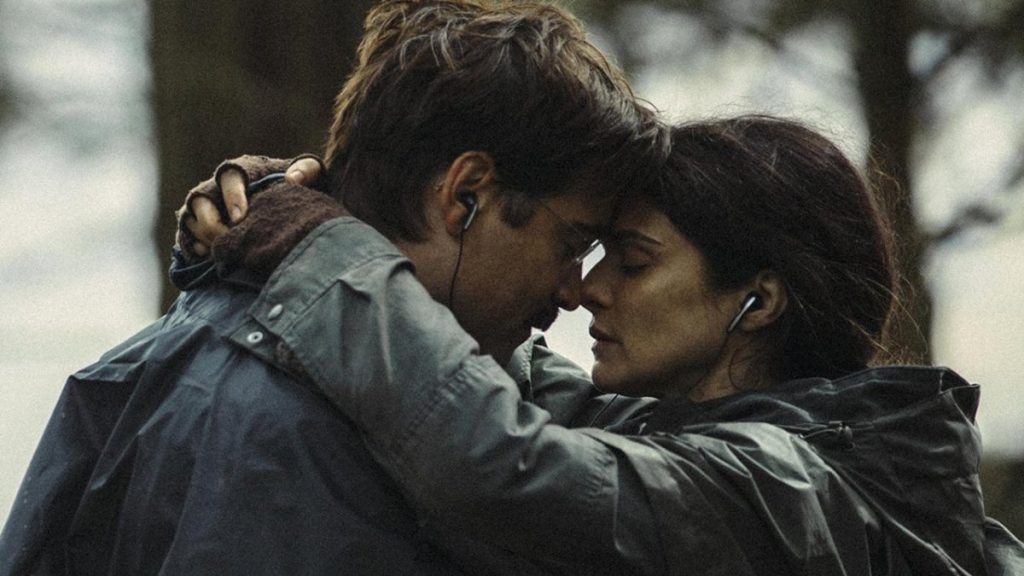 You’re either single or in a committed relationship. Director Yorgos Lanthimos takes this common dichotomy and stretches both ends of the spectrum to their most extreme in his dystopian black comedy The Lobster. It achingly captures the desperation from being single as well as the contentment from a relationship, all the while poking fun at how ridiculous society’s values of these relationship statuses can be. In an age where many people turn to dating apps and sites to hopefully find their match, it reminds us that we don’t need to try too hard or fully compromise ourselves in the process. Is it absurd? Yes, but what a delight it is. 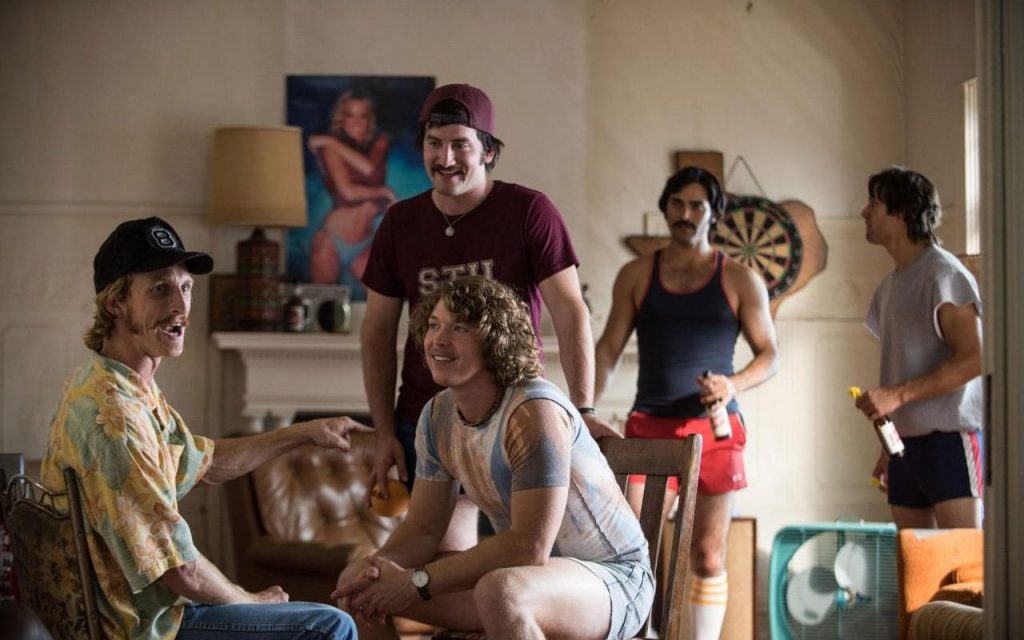 When the characters of Everybody Wants Some!! initially appear on screen and reveal their relationships with one another, it’s easy to dismiss them as frat bros. However, filmmaker Richard Linklater wants us to spend time with them, and over time he brings their histories and personalities to the surface so that we understand that they are like us: trying to find the meaning of life and preparing for whatever life brings their way. For them, they believe that their masculinity and ability to woo women are what secure their stock. And yet, they also seem to understand how cyclical and unstable that foundation may really be.  [Quick Take] 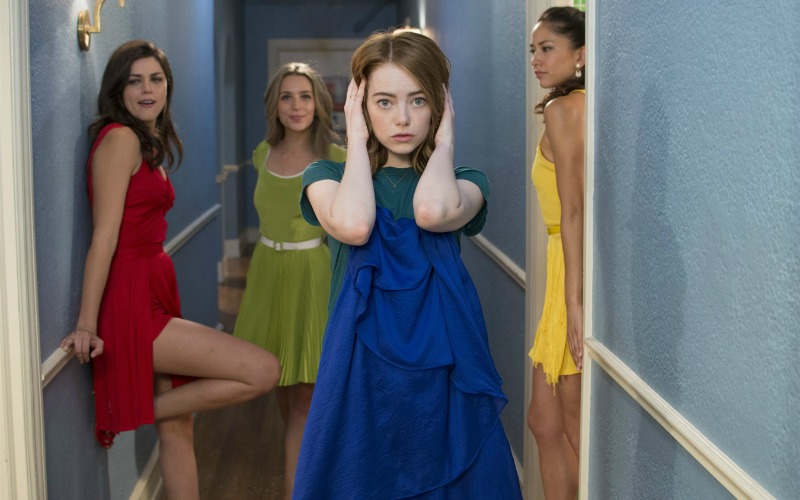 La La Land features terrific songs, poignant music, and a charming chemistry between Emma Stone and Ryan Gosling – all of which I’m sure are what many moviegoers will find most memorable about this impeccable musical. However, what will make it stand the test of time is its depiction of the supposed dichotomy between dreams and reality, specifically how it demands sacrifice to transform the former into the latter. The film explores this theme with an infectious glimmer of hope, but even that hope doesn’t ignore the bittersweet feeling. It’s a healthy dose of reality, yet there still remains a dream that we can chase.  [Review]

Faith is rarely stagnant. It – for lack of a better word – evolves, and that evolution requires doubt. This conflict between what one sees and a loving God’s promises lies at the heart of Martin Scorsese’s Silence, the filmmaker’s passion project. As Andrew Garfield’s Father Sebastião Rodrigues is given every reason to believe that God either doesn’t exist or doesn’t care about his flock, his struggle with what Christianity really means points to thought-provoking ideas meant to engage us long after the film ends. This is a profoundly mature picture about the nature of faith, and the fact that it’s a box office flop saddens me.  [Review] 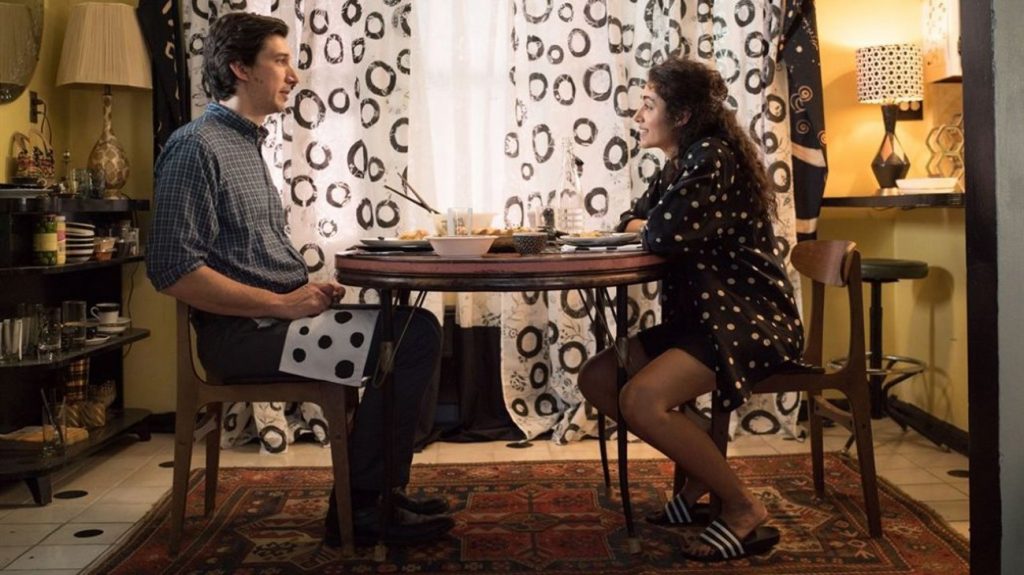 Jim Jarmusch’s Paterson, a modest film about a bus driver who writes poetry, unfolds like a poem. Taking place over the course of seven days, we follow Adam Driver’s Paterson as he navigates through the unassuming mundanity of his life. But each day brings with it something slightly different to vary the meter and tone, and the film suggests that even in the midst of monotony, there is a beauty worth extracting. We can be inspired by it, and that beauty can certainly reverberate throughout the rest of our lives. Mundanity may not be the trap that some make it out to be; perhaps we just need to look just a little closer. 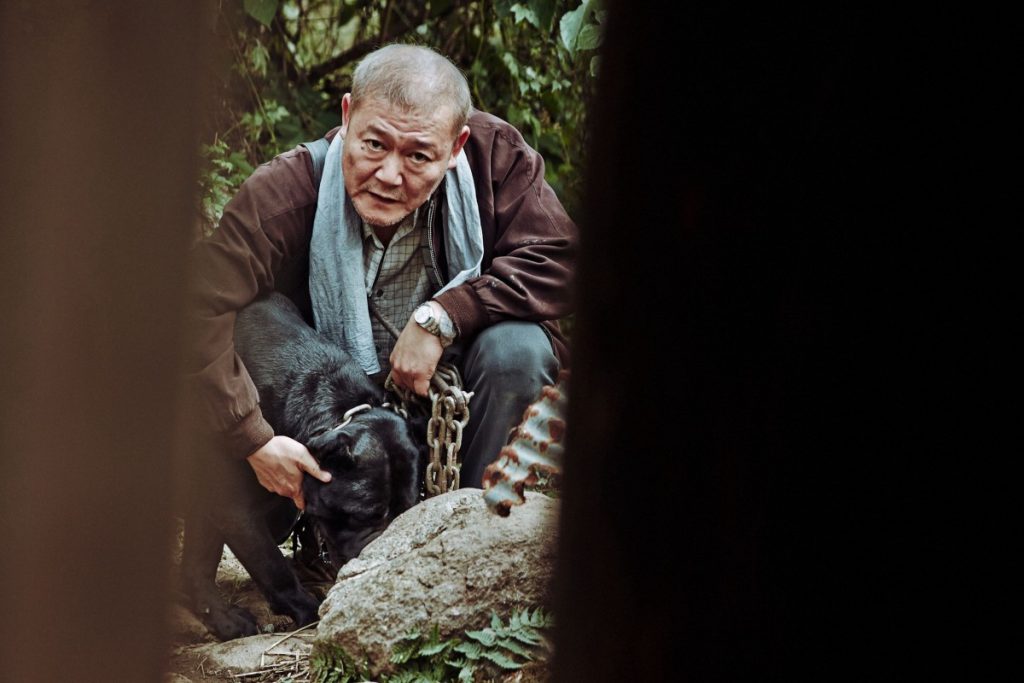 I’ll be honest: it’s been over half a year since I saw Na Hong-jin’s The Wailing, and even now, I still can’t fully grasp the film. And that’s okay. More than okay, actually. Of all the films that I watched in 2016, this disturbing occult thriller has stayed with me the longest, and for good reason. There’s so much to unravel, and really, each new detail and explanation that I come across only make the film that much more compelling and its theme of what is ultimately human helplessness in the face of evil that much more unsettling. It isn’t just the best South Korean film of last year; it’s one of the best South Korean films in years.  [Quick Take]

Captain America: Civil War would not be what it is without the films that came before it. Now, it isn’t the best standalone superhero film. If you ask me, it rarely comes out on top on any “best of” categories for superhero flicks. What makes it a compelling picture, though, is how everything we see on screen serves the characters, whom we have seen grow over the course of the MCU (Marvel Cinematic Universe). When it builds up its characters, their emotions and turmoil are believable. Because of that, the film earns its moments and then some. Not only does that make for terrific entertainment, it’s also evidence of heart.  [Review]

Before I continue on to the remaining two films, I just want to say that these are the two that have been vying for the top spot for the past two months. I kept going back and forth between the two as I thought more and more about each one, and even now, I can’t say that the results are definitive. I fully expect them to shuffle back and forth as I revisit this list again and again in the future, and that goes to show that these two are – without a doubt – timeless masterpieces. 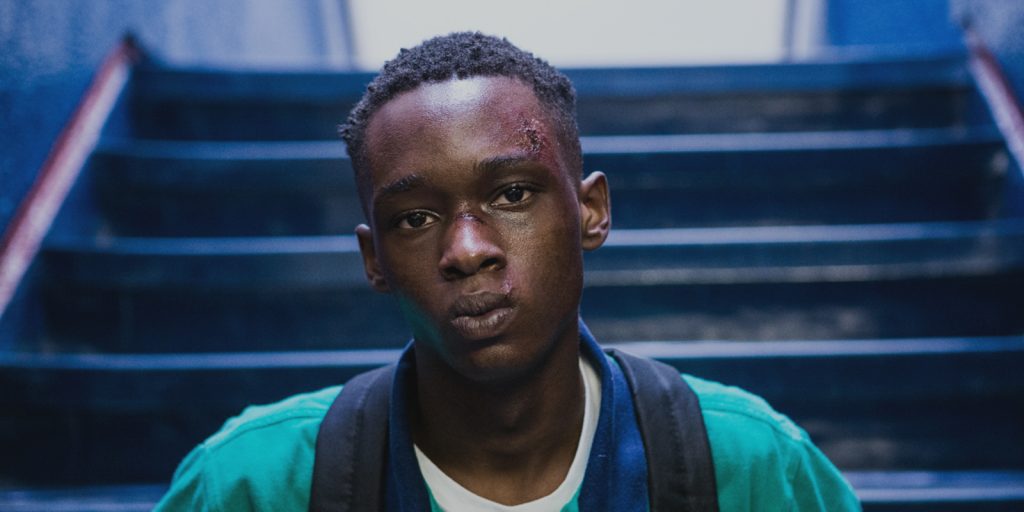 This is a film of breathtaking and extraordinary empathy. With Moonlight, writer-director Barry Jenkins has crafted a coming-of-age story about a young gay black man, but he has also done more than just that. He has made a universal film about identity, masculinity, and coming to terms with reality – experiences and processes that just about any human being is familiar with. That’s our window into the mind and soul of Chiron, and the beats of his journey strike with absolute precision. This wonderful film is about the general and the particular, one that asks us to see a bit of ourselves in our fellow man and woman.  [Review] 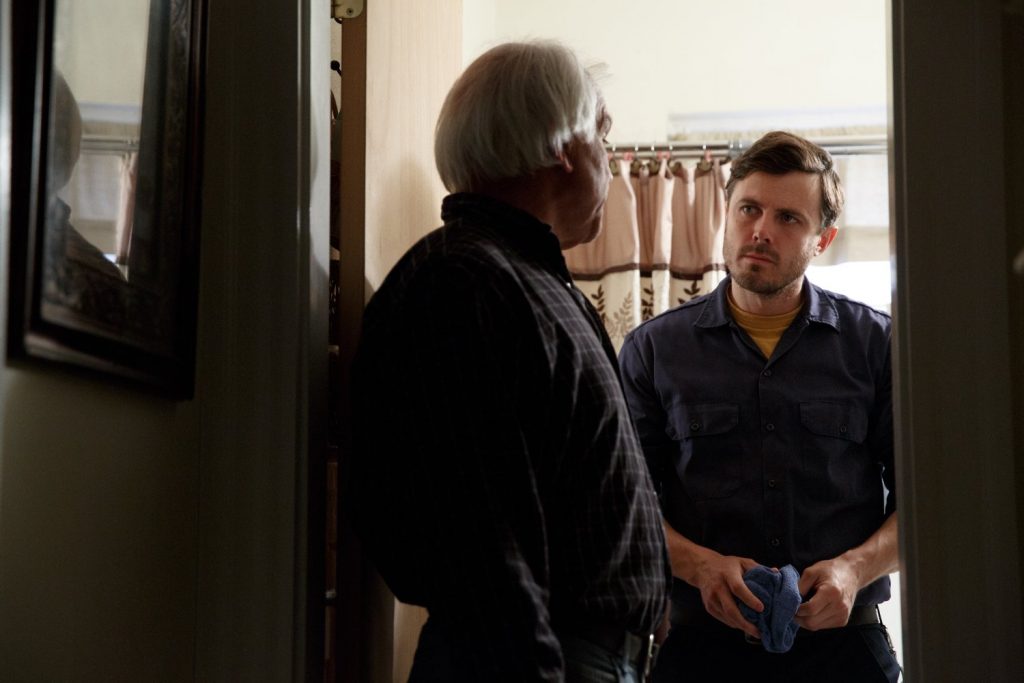 Manchester by the Sea

At one point in Kenneth Lonergan’s brutally honest and operatic drama, Casey Affleck’s Lee utters, “I can’t beat it.” And we believe him. By having us carefully observe the way its characters process a loss so overwhelming, the film shows that sometimes, grief – whether it stems from tragedy or one’s own sins – can be too much to bear. We can’t always be happy or stay positive; every now and then, we need to retreat and mourn. There’s no shame in it, and that doesn’t mean we’re broken beyond repair. Manchester by the Sea suggests that if we have the right people around us, we can put the pieces back together and hopefully heal. Leading us across a vast emotional landscape, this is the best film of 2016.  [Quick Take]

* Available to stream on Netflix.

That wraps up the year of 2016! No matter what 2017 brings us, let’s hope that at the very least, cinema will be there to challenge us, engage us, and provide catharsis, just like it did last year.

I regret to inform you that I won’t be publishing on MediaBrewPub as regularly this year. While I’ll definitely be at the movies, I’ve decided to take on some personal projects that will limit the time I put to writing reviews and quick takes. In my reduced presence, may you always seek out cinema in its many forms and voices!

As we move further forward into 2017, I’ve decided to share my 10 most anticipated films this year: