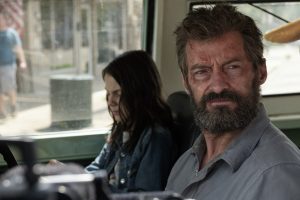 The story certainly bears its share of shortcomings, but they don’t detract from the film’s sheer emotional power. It has pacing issues that mostly manifest in the second act’s quieter moments (which introduce a trio of characters who ultimately contribute little), so it does tend to drag there. The villains – including the relentless Donald Pierce (Boyd Holbrook) and the calculating Zander Rice (Richard E. Grant) – feel like an afterthought, and it doesn’t help that they’re underdeveloped and thus not very compelling. Some moviegoers may find themselves annoyed by how writer/director James Mangold, along with co-writers Scott Frank and Michael Green, is content to either tease or withhold information regarding Charles and Logan instead of providing clear answers, but personally, I think it’s smart storytelling which seeks to keep us engaged both during the film and long after it ends. It should go without saying that viewers should watch the other X-Men films to have an understanding of not just Logan as a character, but also the dynamic between him and Charles; like it or not, Logan wouldn’t be as intimate and poignant if it weren’t for the other films (yes, even the crappy ones) that build up to it. That said, this is an emotionally smart film that rests completely on the relationships between the main characters and their individual arcs. It wants us to feel every ounce of their emotions, and by having us empathize with them so deeply, it earns its biggest moments and then some. 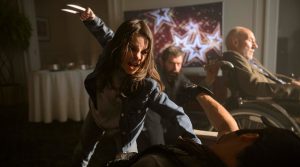 A performance’s effectiveness very much depends on how developed the character is, and here, the ones that matter soar. In his ninth outing as the titular superhero, Jackman strips bare the man’s heart and soul like never before. Logan is still angry and restless, but his regrets and vulnerability render him a quiet shell of his former self now struggling with a lack of purpose. Jackman captures the helplessness and rage to a T, and he can do no better than his incredibly nuanced work here. Ditto for Stewart, who marks his seventh appearance as Charles. The usually composed and refined great mind is no more, and in his place is someone who makes his feelings quite known in a bitter and brutally honest manner. Stewart clearly enjoys this newfound quality, and he’s very funny while still able to tug at the heartstrings with the character’s sentimentality. Newcomer Dafne Keen thoroughly impresses with her turn as Laura / X-23. Capable of saying so much with just a mere glance, she carries a strangeness that draws us in, and from there, she surprises us with her sharpness and volatility. The chemistry that these three share is nothing short of dynamic, and it’s amazing how heartfelt and organic it is. There are a few highlights among the supporting cast; Stephen Merchant is appropriately blunt as the mutant Caliban, and Holbrook perfectly nails the role of a total scumbag. 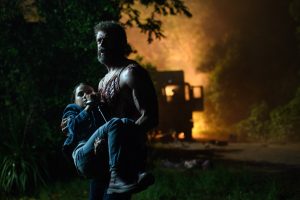 The film knows exactly what it wants to be, and its craft reflects that. It’s almost incredible how scaled back the film is in comparison with most modern superhero films; the lack of mass destruction and “the world is in danger”-like stakes points to how personal it is, yet because of how much we empathize with the characters, the seemingly low stakes here feel much bigger than they are. Much has been made of the film’s copious blood and brutal violence, and for good reason. It was always odd how the other films in the franchise that featured Logan and his adamantium claws were fairly bloodless (with the exceptions being the unrated version of The Wolverine and X-Men: Apocalypse), and given the success of last year’s R-rated Deadpool, fans were excited to see the character’s ruthlessness in all its glory following the confirmation that Logan too would receive the same rating. The film more than satiates that appetite, as Logan and Laura rip, slash, and stab bodies, and what’s great is that the carnage is neither celebrated nor excessive. Their abilities are first and foremost a means of survival, the narrow divide between life and death that takes its toll on the soul with every kill, and Mangold highlights that fact whenever the two draw their claws. The film’s bleak outlook and settings lend the film a very suitable neo-western feel, and that sets it apart from its peers.

Driven by marvelous empathy and a brooding thoughtfulness, Logan is the fond farewell that Jackman and Stewart thoroughly deserve. Mangold has certainly crafted an entertaining flick, but he takes it a step further by building it around Logan, Charles, and Laura – thus ensuring that it has a beating heart.

With the release of Logan, I believe a new ranking of the X-Men films is in order: