There’s Kong, and there are humans, but it doesn’t take a genius to realize which of the two the film focuses on. Whereas director Gareth Edwards chose to painstakingly tease his titular kaiju in Godzilla, director Jordan Vogt-Roberts reveals Kong in all his glory early on, unleashing the ape’s might in a stunning sequence that lays the groundwork for all the proceedings that take place on Skull Island. What’s neat about the film is that Kong is not merely a dangerous beast for us to marvel at and cheer on for the sake of spectacle; writers Dan Gilroy, Max Borenstein, and Derek Connolly bestow on him a backstory and even develop Skull Island around him, thus making him the central character that everything else revolves around. This film very much belongs to him, and he dominates the screen whenever he appears. While there’s some room for the humans to register, only a few of them do. If anything, there are too many, and it says a lot when you can’t remember most of their names, much less care about them; perhaps it would have been better to create composite characters from a handful of them. Only two of the humans – the vengeful Packard (Samuel L. Jackson) and the eccentric Marlow (John C. Reilly) – are remotely interesting, and anyone else who isn’t cannon fodder is paper-thin. The shortage of compelling human characters emphasizes the mixtape-like nature of the plot, which is essentially a series of monster scenes until Marlow steps in. 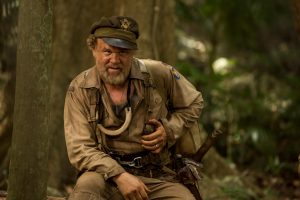 The cast is stacked, yet it’s almost mind-boggling how many of the actors are simply wasted here. Tom Hiddleston and Brie Larson receive top billing, but since their characters hardly develop, their performances remain flat (which leads one to wonder whether many of their scenes were cut). A gravelly John Goodman fares slightly better as the determined and secretive Randa, who benefits from some tension with Packard. Armed with a brash and commanding personality, Jackson is quite the delight here with his larger-than-life turn as the Captain Ahab-like Packard. Though he initially comes across as cartoonish, Reilly steals his scenes by bringing heart and a zaniness to the proceedings, and his presence alone makes the film perk up. Toby Kebbell, Corey Hawkins, Jing Tian, John Ortiz, Thomas Mann, Jason Mitchell, and Shea Whigham – many of whom are quite talented – round out the cast, and while a few like Mann and Mitchell score some comedic beats, none of them are able to make an impression because they have neither the room nor time to breathe. This points to the sheer number of human characters, as the film can only do so much to accommodate them all.

It must be said that this is a visually stunning film, and considerable thought went into its craft. Admittedly, Kong himself is not as expressive as his counterpart in the 2005 King Kong since he rarely interacts face-to-face with the humans, but he looks great, is incredibly textured (take note of how water clings to his hairs), and his sweeping movements – especially in the exhilarating fight sequences – are a sight to behold. He’s not the only creature on Skull Island worth marveling at; from the lumbering yak-like behemoths to the nasty two-armed Skull Crawlers, Vogt-Roberts highlights their scale in proportion to the humans, combining a sense of awe with their beauty or terror. Cinematographer Larry Fong captures a number of downright breathtaking images, especially where warm orange light or silhouettes are in frame. Production designer Stefan Dechant’s work is terrific, like a small clearing surrounded by barren trees and an Iwi village full of jaw-dropping details. Films like Apocalypse Now and Cannibal Holocaust are clear influences here, as demonstrated by deliberate color schemes and image compositions.

Big, loud, and stylish, Kong: Skull Island is mindless, unadulterated fun. Given that Kong will appear again in future MonsterVerse installments, the film sets him up pretty well while delivering on entertainment value. Sure, the humans draw the short end of the stick here to some detriment, but for better or for worse, this isn’t their picture to claim. This is Kong’s show from beginning to end, and needless to say, he runs it with chest-thumping pride.