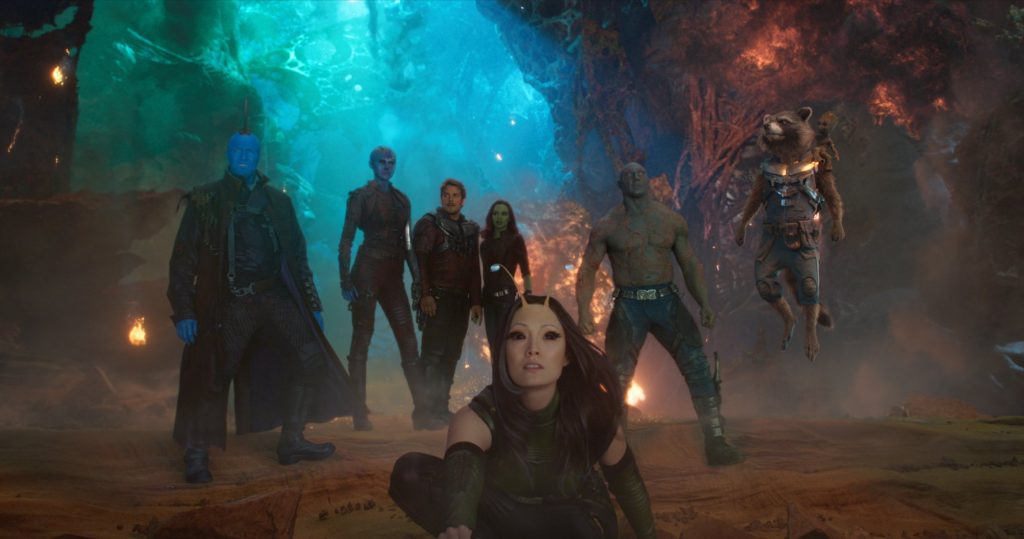 Like it or not, you can’t deny that the first Guardians of the Galaxy is lightning in a bottle. When I ask my peers what their favorite films in the MCU (Marvel Cinematic Universe) are, GotG tends to pop up quite often, and it’s easy to see why. There’s so much to like about it, from the lovable characters and the eclectic cast to the spirited soundtrack and the zaniness of it all, and they come together so brightly and confidently. The fact that it grossed over three-quarters of a billion dollars worldwide in its theatrical run is a testament to how well people responded to it. Considering that few people even knew about the Guardians of the Galaxy before the film came out, it’s nothing short of a rip-roaring and surprising success. This begs the question, can writer-director James Gunn top that with Guardians of the Galaxy Vol. 2? I’d say he has – he takes this beloved gang of misfits to stirring heights, resulting in a film that feels much more emotional and mature, all the while delivering upon its promise of fun. 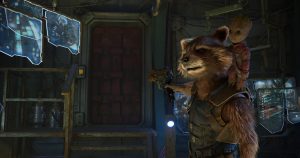 The Guardians of the Galaxy – consisting of Peter Quill / Star-Lord (Chris Pratt), Gamora (Zoe Saldana), Drax (Dave Bautista), Rocket (Bradley Cooper), and Baby Groot (Vin Diesel) – successfully protect powerful batteries owned by the Sovereign race from an large, tentacled creature. In exchange, Sovereign leader Ayesha (Elizabeth Debicki) hands them none other than Gamora’s estranged sister Nebula (Karen Gillan). However, Rocket steals several batteries in the process, and the pissed off Sovereign relentlessly attack the group not long after they leave. They are rescued by the mysterious Ego (Kurt Russell) and shy Mantis (Pom Klementieff), with the former revealing himself to be Peter’s father. With Ego inviting them to visit his home, the Guardians split, with Peter, Gamora, and Drax joining Ego and Mantis while Rocket and Baby Groot repair their damaged ship and guard Nebula. Meanwhile, Ayesha hires Peter’s former mentor Yondu (Michael Rooker) and his gang of Ravagers to capture the Guardians so she can enact her revenge. 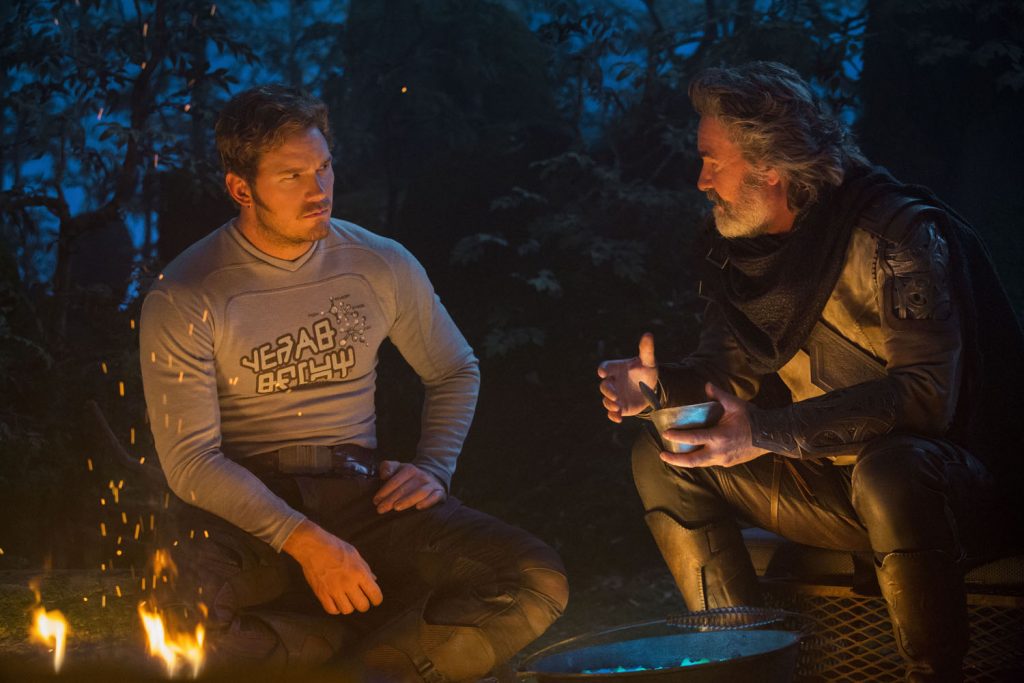 Perhaps the best thing that Gunn does with Vol. 2 is making it a self-contained, standalone story. It’s not really connected at all to the “greater” goings on in the MCU, nor does it seem to build up to or lead into Avengers: Infinity War (which, by the way, comes out in less than a year). If that disappoints you, then you’ll have to deal with it. I’ve seen several reviews describe the film as aimless, and while I can see where they’re coming from, I argue that Gunn isn’t so much concerned with plot as he is with the characters and the relationships they share – which is great. He delves into them here with aplomb, and considering that both GotG films are ultimately about these characters and relationships grow, it’s very fitting. Granted, the story that he crafts isn’t flawless. What we have here is a balancing act between multiple characters, and at times, that balance bends in favor in certain characters at the expense of others, so certain scenes and sequences do drag. The villain is clearly designed to have personal, small stakes when confronting the Guardians, yet big, galaxy-threatening stakes are also slapped onto said villain’s plans. This leads to a dissonance that’s felt whenever the camera turns away from the Guardians’ direct conflict to show how the galaxy is in danger since we clearly care about the former and hardly at all about the latter. 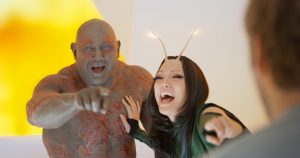 The theme of family still runs strong, and the character arcs revolve around it. If the first GotG is about a family coming together, then Vol. 2 is about what keeps that family together. Each of the Guardians has a compelling arc with the exception of Baby Groot (for the most part, he dances and finds things while looking adorable, which he wildly succeeds at), and how it plays out is nothing short of delightful. These arcs are realized through pairings, and Gunn pairs each Guardian with a new character: Peter with Ego, Gamora with Nebula, Drax with Mantis, and Rocket with Yondu. Not only is this a smart way of bringing the new characters into the fold, that at the core of these pairings is a connection or shared trait between the characters opens up the opportunity to explore aspects of the Guardians we know little about. We see how the death of Peter’s mother Meredith (Laura Haddock) and Ego’s absence affected their son’s upbringing, how Gamora deals with the fact that her sister openly despises her, Drax’s past concerning his family, and what drives Rocket to commit certain actions that put him at odds with the other Guardians. Needless to say, this is a profoundly affecting film that boasts incredible heart. 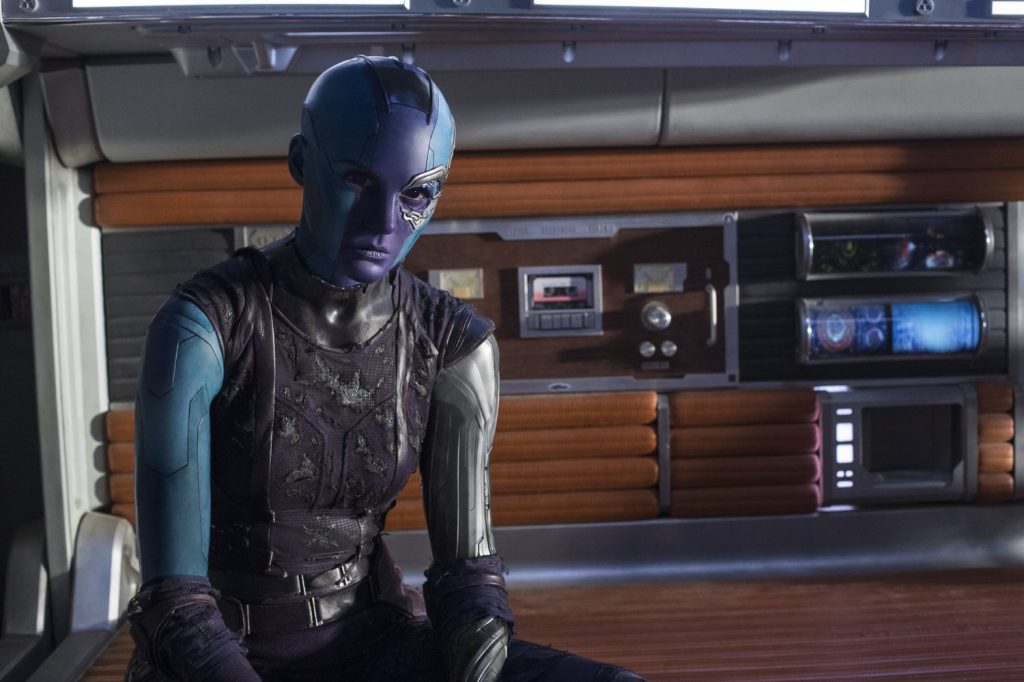 The themes of family and a sense of belonging extend to the new characters as well, and Gunn gives them a welcome dose of humanity that we can attach to. Yes, Ego is a asshole for not being present in Peter’s life as well as Meredith’s death, but he accepts that judgment without hesitation and expresses deep regret at what he missed. Gunn peels away Nebula’s cold exterior and reveals details of her past to paint her as a tragic figure deserving of our sympathy – as a bonus, this gives us an idea of the threat that Thanos will pose in future MCU films. Through Mantis’ awkward and hilarious interactions with Drax, we feel her loneliness and desire to connect with others. Yondu proves to be one of the film’s most potent weapons; we already know that he didn’t deliver Peter to Ego all those years ago, and here we see how that choice has influenced the relationships he shares with the Ravagers and many other characters. Each of these characters feel organic and are thoroughly interesting, and that’s – combined with the performances – enough for me to overlook how their backstories are told instead of shown. 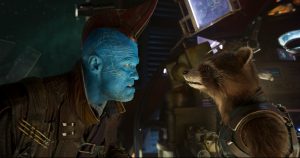 The film’s dynamism and zaniness are realized through the enthusiastic and tremendous cast. Pratt is in his element here, pulling off obnoxious and suave with ease. Saldana excels at playing the voice of reason, and it’s amusing to see the friction between her desire for professionalism with the other Guardians’ personalities. Bautista is an absolute riot, as he constantly wrings hilarity from Drax’s lack of tact. Cooper and Diesel are terrific as expected, and they have fun tackling their characters’ added nuances and the challenge of being a baby respectively. The casting of Russell is genius; the fact that the actor is an ’80s (which the film opens in) movie star amplify the sense of cool surrounding Ego, and he brings ample warmth to the role. Benefiting from an increased screen time, Gillan effectively leaves her mark and imbues her biggest moment with great pain. Klementieff brings much poise to Mantis, and her ability to change emotions so quickly and convincingly makes her stand out. Balancing a gruff disposition with a sensitive heart, Rooker knocks it out of the park and delivers the film’s best performance. Debicki’s allure and stiffness augment Ayesha’s haughtiness and regality that you can’t take your eyes off of her. Enough can’t be said about the chemistry that these actors share; they clearly enjoy playing these characters and exchanging Gunn’s snappy dialogue with one another, which allow the film’s humor to soar. 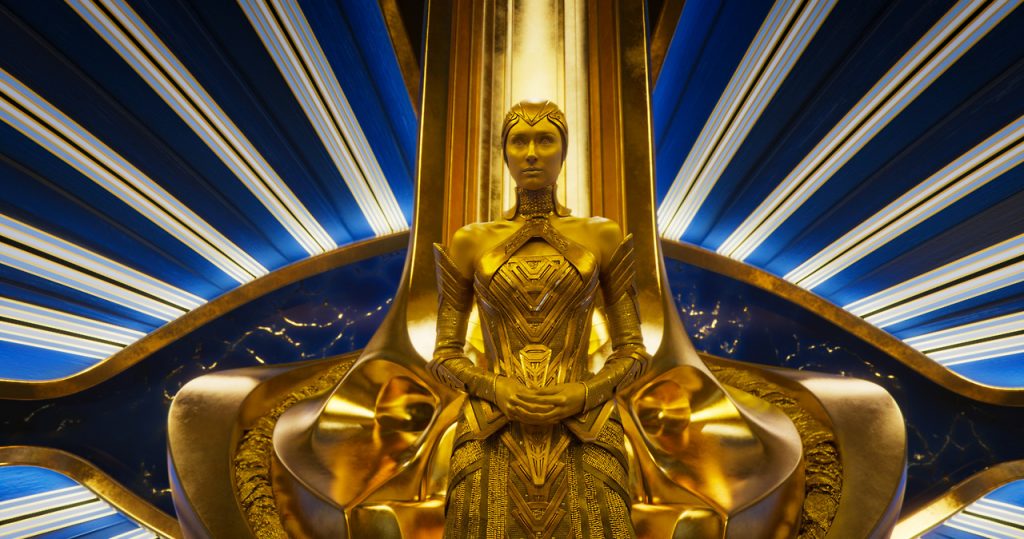 Key to the film’s liveliness are the audial and visual craft on full display. Henry Braham’s cinematography, Scott Chambliss’ production design, and the sheer volume of visual effects exploit every shade of bold, bright color as well as every contour of the galaxy’s architecture, design, and environment. In doing so, not only do they make this universe feel tangible, but the film also comes closest out of all the MCU entries to capturing the experience of reading a comic book. The makeup and hairstyling work is top notch, as each character that requires makeup – from Drax and Nebula to Ravagers Taserface (Chris Sullivan) and Kraglin (Sean Gunn) – is distinctive from the others, and that in turn serves to highlight the diversity found in the galaxy. Just as the first GotG boasted an impressive soundtrack that was Guardians of the Galaxy: Awesome Mix Vol. 1, so does this one, as included in the film are a vigorous collection of songs that make up Guardians of the Glaxy: Awesome Mix Vol. 2. The songs here are understated in that they rarely overwhelm the image (thankfully), and highlights include Electric Light Orchestra’s “Mr. Blue Sky” and Fleetwood Mac’s “The Chain.” Plus, it’s definitely worth mentioning that the original song “Guardians Inferno,” featuring David Hasselhoff, is a treat. 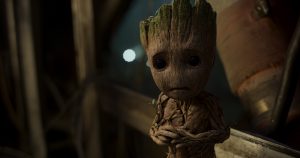 Honestly, I didn’t expect myself to enjoy Guardians of the Galaxy Vol. 2 to the point where I prefer it over the first film, but here we are. By opting to focus solely on his characters and their relationships and shun the bigger canvas that is the MCU, Gunn has crafted a heartfelt picture where the Guardians can further cement in our memories and hearts. It deservedly claims a place among the best entries of the MCU, and I can’t wait to see where Gunn goes with the third film.

As is tradition with every review of an MCU film, here are my latest rankings for all the installments: