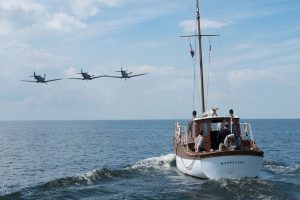 The film is a triptych, where three perspectives of the Dunkirk evacuation (code-named Operation Dynamo) are interwoven in a non-linear narrative. Covering one week, “The Mole” focuses on young British Army private Tommy (Fionn Whitehead) and several of his fellow soldiers as they await evacuation on the beach, all the while being terrorized by the Germans, who have surrounded the Allied forces and regularly pick them off with bombing runs. Covering one day, “The Sea” follows the civilian boat Moonstone, which is commandeered by Mr. Dawson (Mark Rylance), his son Peter (Tom Glynn-Carney), and their teenage hand George (Barry Keoghan), as it participates in the evacuation. Covering one hour, “The Air” takes place in the skies, where Royal Air Force pilots Collins (Jack Lowden) and Farrier (Tom Hardy) provide air support to the evacuating Allied forces.

In some ways, Dunkirk feels like a departure for Nolan, though it is very much his project through and through. The non-linear narrative will have his fans harkening back to Memento (which to me remains his best film) and highlights not only his storytelling tendency to play around with time, but also his hallmark of cross-cutting (done effortlessly in the hands of editor and frequent collaborator Lee Smith). While jarring at first, it works quite well here as we’re eased into each of the perspectives (which play out in the order of “The Mole” to “The Sea” to “The Sky” and repeat), though I was able to see the convergence point coming a mile away. This is about as minimalist as Nolan gets; the straightforward plot and extremely limited dialogue feel like his rebuttal to the oft-levied criticism that he relies heavily on exposition in his films. These, combined with the relatively short runtime, impart the sense that he really is trying something new with this film. Like the rest of his previous blockbusters, the film is rated PG-13, and Nolan once again pushes the envelope as far as he can by heightening the intensity and terror to stunning results, which make up for the unusual lack of blood and gore. 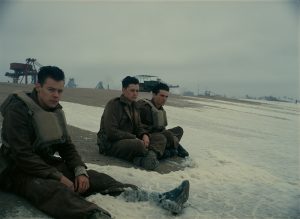 What also sets this film apart from Nolan’s other works is its coldness, particularly in regard to its characters. Sure, his past films are noted by some to be emotionally distant, but at least they feature distinct and memorable characters for audiences to familiarize with and emotionally invest in. The same can’t necessarily be said for Dunkirk, which exhibits a host of characters but keeps them at a distance. Perhaps this is by design; the film is meant to be an experiential piece of filmmaking first and foremost, so in a way, it makes sense that character work isn’t a top priority here. Still, that the film seems to adopt an indifference toward its characters’ personalities and fates makes for an odd exercise in empathy, particularly when it comes to “The Mole.” Names are rarely uttered in that storyline (I had to look up the cast list afterward to find out the characters’ names), and during its chaotic sequences, many of the soldiers honestly look the same given their uniforms and gear, so it’s difficult to keep track of them. In contrast, the characters in “The Sea” and “The Sky” fare better because they actually call each other by their names, they’re easier to distinguish, and there are less of them to work with. Even then, the film quickly introduces them, and very little (if any) of their backstories are given. 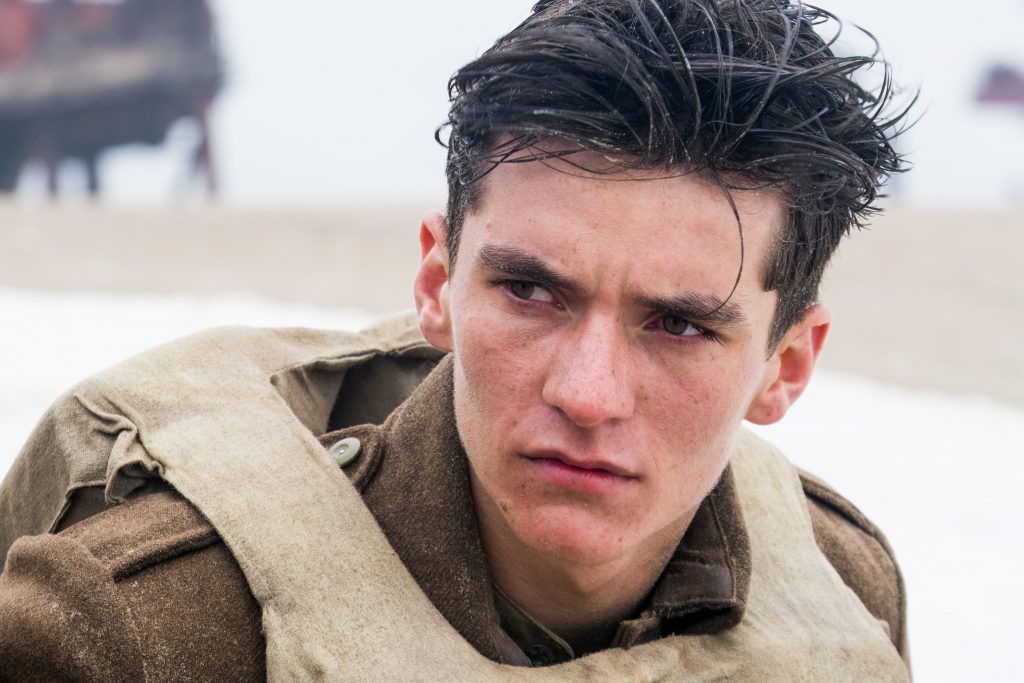 Character designs aside, the cast deliver reliable and solid – if not excellent – performances. The younger cast members carry their roles with confidence, and they react quite convincingly to the horrors both seen and unseen around them. Whitehead is terrific, and another actor who impresses here is Harry Styles, who plays a soldier named Alex. Among the older cast members, there are a number who stand out. Playing Commander Bolton in “The Mole,” Kenneth Branagh effortlessly conveys despair and determination regarding his troops’ situation with mere looks. In “The Sea,” Rylance uses his calm and gentle demeanor to great effect, and Cillian Murphy lays bare the psychological toll of war in his role as a shell-shocked soldier with conviction. Hardy and Lowden shine when expressing their characters’ moral conflicts and struggles for survival. 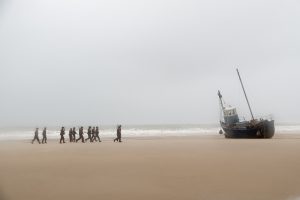 I cannot emphasize enough the importance of watching Dunkirk in IMAX 70mm (which is limited to a small number of theaters across the U.S.) if you wish to experience the film at its true potential. Not only would you be watching the film the way that Nolan wants you to, the format makes for an incredibly immersive experience. An estimated 75 percent of the film was shot on IMAX film, so when combined with the rich amount of detail that 70mm film captures, the result is an enormous and stunning image that pulls you into the film’s world and elevates Hoyte van Hoytema’s remarkable cinematography. The negative space in select frames – particularly ones depicting the Allied forces on the beach – emphasizes the desolation and isolation that their situation presents. For the dogfight sequences in “The Air,” we truly get to comprehend just how expansive the skies are as well as the sheer difficulty of shooting down planes. While the image can be out of focus at times for the flight sequences, the fact that Nolan and Hoytema managed to get such footage by placing IMAX cameras on the planes is a remarkable achievement. What does get annoying about the IMAX 70mm format is the frequent aspect ratio change from IMAX to 70mm, especially when it occurs in a single scene – the image suddenly becomes darker and takes on a blue-gray hue, leading to aesthetic inconsistencies.

Also enhancing this experience are the superb audial elements at play. The sound design and editing are simply impeccable, as they place us right in the characters’ boots. Fear operates by escalating, and that’s what the shrieks of planes and the explosions from bombs do here. It’s one thing to see the faces of soldiers turn from gloom to terror, but to also hear the impending doom they’re hearing is something else. Hans Zimmer’s experimental and relentless score seeks to unsettle us and have our hearts racing from beginning to end, and the implementation of a ticking clock as well as sounds of warfare in his music achieves just that. The mixing of all these sounds is top-notch, with my only criticisms of it being that it occasionally does get overwhelming to the point where dialogue is extremely difficult to hear. 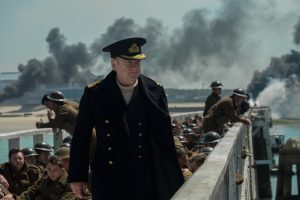 In the IMAX 70mm format, Dunkirk makes a trip to the theater an event and a memorable experience that cannot be missed by any self-respecting cinephile. Despite its coldness (which not may bother some) and a few gaffes in its craft, there’s no denying that Nolan wildly succeeds at offering an exceptional theatrical experience. Now, the question you may ask is, is this the best depiction of Dunkirk in film? I don’t know – that tremendous tracking shot in Joe Wright’s Atonement is pretty hard to beat.