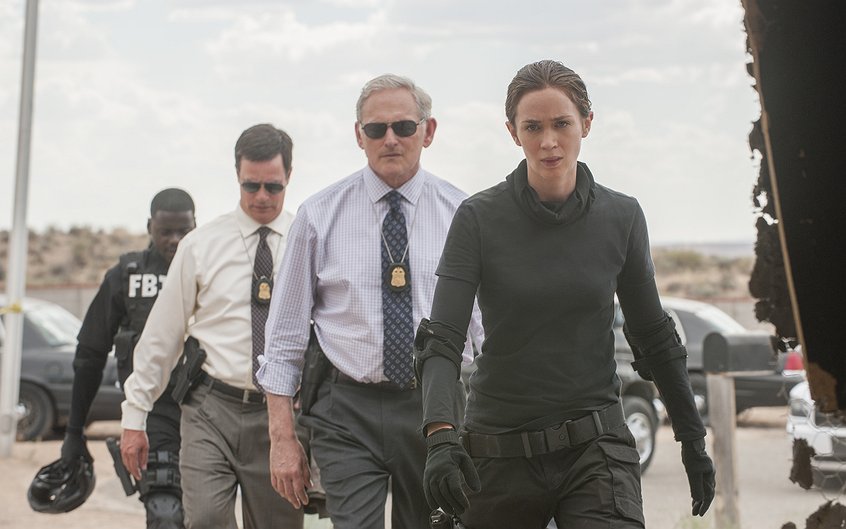 Sicario is a film that doesn’t beat around the bush. From this, you may get the impression that it’s a film raring to get in our faces and show us what it’s got, but that’s not exactly the case. Yes, it’s direct and possesses a thrilling story, but what’s so striking about this picture is its calculated, restrained approach. Before it detonates, it hints and teases, and in doing so, it uses every element and tool it has in its arsenal. It’s a controlled, disciplined film, and to watch it unfold is marvelous. 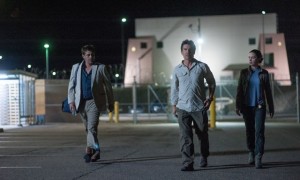 After a raid uncovers gruesome results, idealistic FBI agent Kate Macer (Emily Blunt) is enlisted by government task force official Matt Graver (Josh Brolin) to assist in the escalating conflict against the Mexican cartels, whose sprawling network of drugs and violence stems from Mexico and already seeps well into the U.S. side of the border. Upon joining the team, Kate becomes acquainted with Alejandro (Benicio del Toro), a mysterious consultant with a questionable past, and plunges into a clandestine operation that progressively makes her doubt the laws and values that she espouses and believes in. 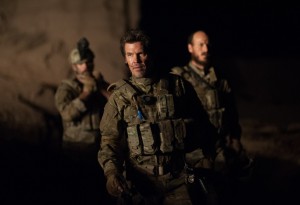 Director Denis Villeneuve (Prisoners) and screenwriter Taylor Sheridan (writing his first feature film here) keenly tell a story about the use of violence and how far its ripples extend, and in doing so, they twist the notions behind its perpetrators and victims. From its first frame, Sicario begins building the world that it seeks to portray, and it’s a weary world crippled by rampant violence, where laws and morals have to be abandoned. For the Americans, to effectively combat the cartels is to strike back with equal venom and force, sometimes even outside of the borders of their country. At one point, the task force travels through the streets of Juárez, Mexico in a fleet of black SUVs, and the way that ace cinematographer Roger Deakins shoots this harrowing sequence makes the fleet seem like a serpent, craftily making its way through enemy territory with Mexican police escorts before striking. When the time comes to depict violence, the film doesn’t hold back; instead, it goes straight for the throat with bloody, brutal efficiency. Through all this, we must ask: at what point does the victim cease being a victim and become a perpetrator, and vice versa? Can justification truly be found in a land of wolves, where only the wolves can survive? The film also complicates matters further by showing glimpses into the life of Mexican cop Silvio (Maximiliano Hernández), who leads a family with discipline, humility, and love. Villeneuve and Sheridan subtly add humanity and weight to this tale with scenes like these, and thus we come to understand just what the cost of violence truly is, and how the ones affected by that the most are often those who have no role or say in it. If you haven’t guessed already, this is a cynical, somber film from beginning to end, and it abides by a bleak tone. 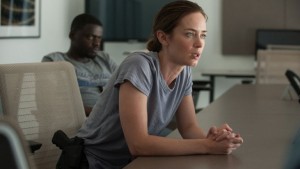 Villeneuve and Sheridan structure this story so that it plays out like a twisted coming of age tale, though to describe it as a loss of innocence is arguably more apt. What we’re witnessing here is a deconstruction of a hero, as opposed to a typical monomyth or a classic hero’s journey as described by Joseph Campbell. Instead of finding and establishing her influence in this world, Kate steadily loses what influence she has and comes to find that she really has no power. The fact that she’s the only female in a male-dominated world certainly isn’t a coincidence, and that makes her arc all the more compelling. It can be discouraging, even frustrating, to watch her deconstruction, but that’s the point: someone with a moral compass as strong as hers is futile when facing problems of such magnitude. Kate is, in many ways, our window to this world because – like us – she’s unfamiliar with what really goes on in it. This, coupled with the fact that she’s a character whom we can easily empathize with due to her strong moral compass, makes her journey so visceral; we don’t just watch her story, we experience it. 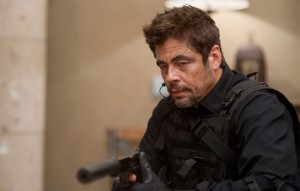 The film boasts a trio of superb performances, all of which are appropriately subdued. As a result, the characters of Kate, Matt, and Alejandro feel like a natural part of this world. Blunt exudes iron will and steely resolve, and it’s incredible how her eyes communicate everything we need to know about Kate, who represents a black and white law. Brolin effortlessly lets his machismo and succinctly delivered humor bring to life not just Matt, but the gung-ho American attitude that’s eager to flaunt itself. Yet it is del Toro, whose character is a man of few words, that completely steals the show. He combines calmness, body language, and mannerisms to build an aura that speaks volumes about the threat that looms behind Alejandro’s peculiar, quiet exterior. What is he? Why, he’s violence incarnate, who goes where he’s needed.

This is a heart-racing picture that lives off tension. Every aspect of filmmaking craft goes into building suspense, from Johann Johannsson’s low, pulsating score to the crisp sound design, in which particular sounds, such as forks scraping against plates, are augmented against a backdrop of silence. Tension burns nice and slowly before Villeneuve delivers a cold, sharp blow to the heart. Admittedly, this is best showcased in the film’s thunderous first half – particularly in the aforementioned Juárez sequence – as the second half doesn’t quite measure up to the heights that its predecessor sets. In between the taut sequences that will likely be its biggest talking points, the film continues to raise the stakes and build suspense again. It owes much of its success to smart storytelling: it communicates much by showing little, and it neither embellishes what it shows nor panders to its viewers. It doesn’t always show the full extent of its characters’ actions, and the great thing is, it doesn’t have to. We can deduce what’s going on or what happens based on audible and visual cues we receive from Villeneuve and Sheridan. This is terrific storytelling: one that opts to show over tell whenever it can and also respects its audience. It enhances the film’s persisting, prevailing sense of dread. 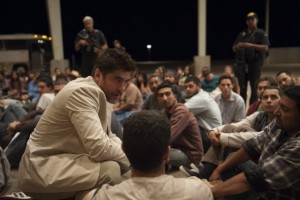 Surely one of the must-see films of this year, Sicario is a product of great vision and intelligent direction. Its characters breathe and also double as ideas, its tension brings hearts to throats, and the film deals with shades of gray comfortably and shrewdly to tell a compelling story. This is truly a sophisticated picture that’s made by a team of talented individuals, who clearly understand what power cinema can have.