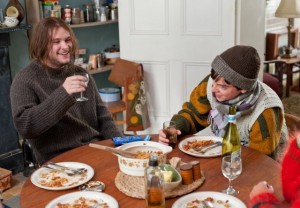 Carney knows what story he wants to tell and how to tell it, and the end result is a film full of heart and humor. Taking place in 1980s Dublin, Ireland, the film almost offhandedly establishes the historical backdrop at the beginning, and yet it’s key in rounding out these characters as well as explaining their actions and feelings without ever calling attention to itself. That backdrop also allows the film’s charming tone to flourish; here, quirk and whimsy are synonymous with passion and want, so when these characters interact with one another or face serious issues lightheartedly, they’re simply and understandably expressing their desires, which is to escape their conditions. Making all this work is a motley crew of characters, with each of them turning out to be charismatic and interesting. It’s somewhat disappointing how the film only delves into Conor (Ferdia Walsh-Peelo), Brendan (Jack Reynor), and Raphina (Lucy Boynton) since the other members of Conor’s band are left wanting of exploration, but still, their mere presence and interactions are enough to give the film its heart. 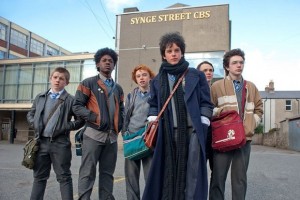 The cast is just wonderful. Walsh-Peelo is tasked with carrying most of the film, and he does just that with ease, hitting the right emotional notes while never losing his charm. Perhaps the biggest delight here is Reynor, whose natural chemistry with Walsh-Peelo allows him to own the film’s most dramatic and heartfelt scenes. Boynton maintains a fascinating presence throughout, as she’s careful not to completely reveal her emotions while playing off of her fellow cast members, which serves her character quite well. Aiden Gillen, Don Wycherley, and Mark McKenna don’t feature in the film as much as the aforementioned three, but they do leave quite an impression thanks to their bright performances. 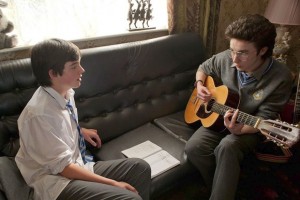 An appreciation and love for music courses through this entire picture’s veins. Sure, it features music by artists such as The Cure, Duran Duran, and Hall & Oates (to name a few), but it’s also a film about crafting and creating, which results in an utterly memorable and must-have original soundtrack. Composed by Carney and musician Gary Clark, songs like “The Riddle of the Model,” “To Find You,” “Drive It Like You Stole It,” and “Girls” prove to be quite catchy and earnest in their emotions. Carney and his crew get downright creative with film formats and style when it comes to filming the characters perform these varied songs, and such sequences are a joy to witness.

Sing Street is a film that unabashedly wears its heart on its sleeve, and it delights. Its historical backdrop subtly powers its singular tone, and making it all click is a charming cast and a passion for music. Irresistible from beginning to end, it’s almost impossible to dislike it.